Clonbullogue advance to final with dominant second half display 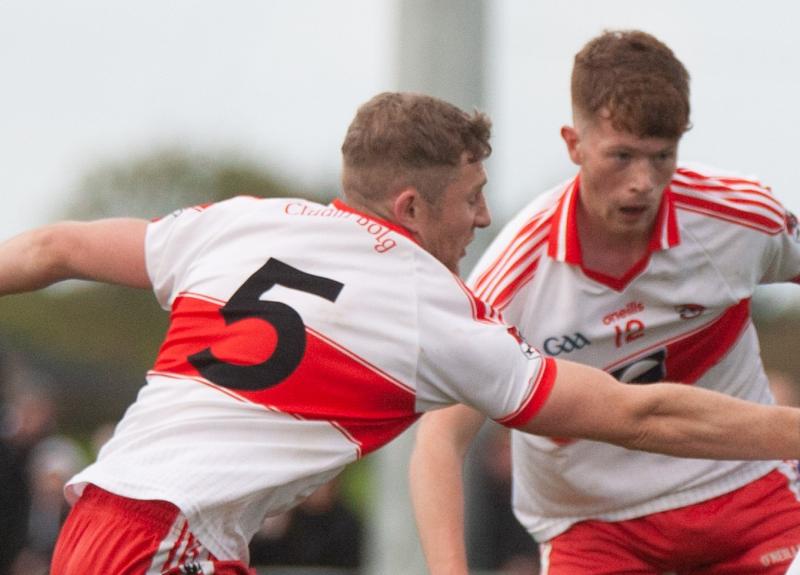 A strong second half performance sent Clonbullogue through to the Offaly Intermediate Football Final after they defeated Daingean by a nine point margin in the semi-final played in Edenderry on Saturday last.

Only a point ahead at the interval, Clonbullogue were much more productive in the second half and turned their possession into scores and they were deserved winners in the end. They can now look forward to a final meeting with Raheen the weekend after next.

Over the hour Clonbullogue were the better team but it took them time to convert their possession into scores. A strong crossfield wind probably didn’t help either team and while Clonbullogue had most of the possession in the first half they found it hard to break down the Daingean defence.

Daingean fought hard to stay in the game and at times they looked quite threatening but they found it very difficult to score. They nearly went through the first half without scoring and didn’t raise a flag until first half injury time but that score was a goal that got them right back into the game and they were only a point behind at half time, 0-5 to 1-1.

When they levelled inside the first minute of the second half, one wondered if the momentum had switched to Daingean but to their credit, Clonbullogue responded impressively and four points in a five minute spell restored their advantage. They then struck for their goal midway through the half and from there on there was only going to be one winner. Daingean never gave up but Clonbullogue were in control at that point and they picked off the points to send them through to the final.

Unlike their quarter final victory over Shannonbridge where they scored three goals in the first five minutes to take control, Clonbullogue had to be much more patient on this occasion. They enjoyed the bulk of the possession but were unable to find gaps in the Daingean defence. They did score four points in the first 16 minutes but the score remained that way for the next 15 minutes when Daingean struck for their goal and after all their domination Clonbullogue only had that one point advantage at the break.

Daingean worked extremely hard in their defence and they frustrated Clonbullogue throughout that first half. But they found it difficult in attack themselves as they came up against a solid Clonbullogue rearguard who defended resolutely throughout the 60 minutes.

Clonbullogue lost two players to injury during the game, losing Harry Judge and Daryl Quinn in either half, but as it turned out it was Quinn’s replacement Joe Foran who struck for their goal four minutes after coming on and he had a very positive impact on the game thereafter. David Dempsey, Shane Furey and Ian Curry also did well in defence with Jack McEvoy excelling at midfield. Keith O’Neill, Shane O’Brien and Jamie Guing were best in attack.

Stephen Joyce, Ciaran McEvoy, Adam Bolger, Shane Tierney and Jamie Hayes were Daingean’s best but they were well beaten on the day.

Clonbullogue were ahead after a minute when Jamie Guing pointed a free. They had to wait eight minutes for their next score when Jack McEvoy scored and they went close to a goal a minute later but Harry Judge’s effort was saved with his foot by Conan Curley. Judge picked up an injury which forced him off minutes later. Keith O’Neill pointed a free and Sean Foran added another point and it was 0-4 to 0-0 after 16 minutes.

Daingean did finally begin to get some attacking possession but three wides in quick succession left them without a score entering injury time when a high ball from Aaron McCourt found Jamie Hayes and he picked out Shane Tierney who finished to the net. Shane O’Brien quickly replied for Clonbullogue but Cathal Ryan pointed a ‘45’ in the seventh minute of injury time to leave it 0-5 to 1-1 at half time.

Forty four seconds into the second half Jamie Hayes had the sides level and Daingean were well back in the game but Clonbullogue lifted their game. Keith O’Neill pointed a free, Jamie Guing kicked a lovely point with his left foot, Keith O’Neill added another from play and Thomas Morrissey also scored to put them back in the driving seat again.

Clonbullogue missed a goal chance when Jamie Guing’s effort came off a post but they did raise a green flag after 45 minutes when Shane O’Brien’s high delivery was caught by Joe Foran who finished neatly to the net.

Shane Tierney did reply for Daingean but Clonbullogue had their tails up and two Shane O’Brien points sandwiched another from Sean Foran as they moved nine clear. Jamie Hayes kicked two inside a minute for Daingean but Clonbullogue had the final say with two more points from Keith O’Neill, one from a free and the other a ‘45’ as they progressed to a final meeting with Raheen.

Keith O’Neill and Shane O’Brien were prominent in attack in the second half but over the hour, midfielder Jack McEvoy was central to much of their play and for his consistency over the 60 minutes he gets the nod.

Clonbullogue had re-established a grip on the game when scoring four points in succession in the third quarter but Daingean were still a threat until sub Joe Foran caught a high ball and shot to the net midway through the half and there was no looking back from there.

Basil Cronin had few issues to worry about here. There was a bit of a stop start nature to the game with a lot of injuries and the referee was generous in allowing plenty of injury time, a total of 16 minutes between the two halves.

Clonbullogue have made good progress throughout the year and are now on the verge of intermediate glory. They lost to Daingean earlier in the year in a group game but on Saturday they were the dominant team and will hope to maintain that momentum as they head into the final against Raheen.

Clonbullogue progress to the intermediate final where they will take on Raheen, while a progressive season comes to an end for last year’s junior champions Daingean.

The Edenderry venue was in good shape for this semi-final. The pitch was in excellent condition and the club had plenty of stewards on duty looking after parking and ensuring the smooth running of the fixture.