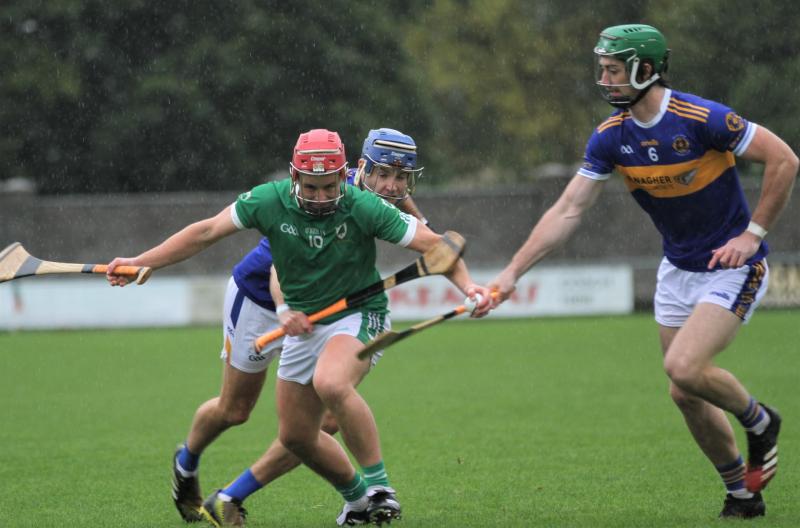 The third round of games took place last Sunday and K-K and St Rynagh's are sitting top of the table with three wins and six points. K-K are ahead on scoring difference, +29 points compared to +13 but they meet St Rynagh's in the next round and this result is likely to dictate who goes through to the semi-finals as group winners.

The format this year sees two groups of five with the teams playing the ones in the opposing group. However, it is the clubs with the best record that qualifies and the championship has gone on very predictable lines so far.

Seir Kieran and Drumcullen are now odds on for the relegation play off and Kinnitty should be safe. While Kinnitty have four points and are technically in the hunt for a semi-final place, that remains a long shot. After suffering an anticipated defeat to St Rynagh's in the first round, Kinnitty have got two absolutely crucial wins against Drumcullen and Seir Kieran. This trio were the front runners for relegation at the start of the year and those wins should keep Kinnitty up.

They are now in bonus territory and while it would be a big shock if they made the semi-finals, they have nothing really to lose in their final games against Belmont and Shinrone. It is not impossible for Kinnitty to win one or both of those games and they will be aiming for a high bar now. Kinnitty have benefitted from being in the easier group as they have avoided three of the big guns in Kilcormac-Killoughey, Birr and Coolderry.

Kinnitty withstood a late Seir Kieran rally to win their clash on Sunday by 0-17 to 1-12. Belmont were struggling badly with two losses and their goose looked to be cooked when they lost star player, Oisin Kelly to a cruciate injury. However, they have transformed their season with a surprise 0-11 to 0-10 win over Birr in Tullamore on Sunday. It was a huge win for Belmont and they will be hoping to get onto four points when they meet Kinnitty next – their final game is against Ballinamere.

Belmont had lost their first two games to Coolderry and Kilcormac-Killoughey. They were always going to be underdogs for those and their target now is six points. And six points is likely to get one team through.

The target to ensure qualification for the semi-final is 8 points and an examination of the closing fixtures suggests that just one team will get through on six points.

The closing fixtures are:

Only five clubs can hit eight points: Kilcormac-Killoughey, St Rynagh's, Birr, Coolderry and Kinnitty. Shinrone, Ballinamere and Belmont will all be hoping that six points will get them through but they are at the mercy of other results when it comes to qualification.

The winners of K-K and St Rynagh's will be through the gap in the next round and a draw will probably put both through. St Rynagh's have Birr last and still have work to do but their form does not suggest they will now lose two games. K-K will be hot favourites to beat Drumcullen and if Rynagh's do beat them, that should be enough for them.

It is possible for five teams to finish on eight points but that is unlikely – it requires Kinnitty to win their closing two games.

Coolderry are now odds on to hit that eight point tally as their closing games are against Drumcullen and Seir Kieran. Coolderry are going very well and were not far off the mark in a 3-12 to 1-15 defeat to St Rynagh's in Birr on Sunday.

Birr find themselves in tricky territory. They had played well when beating Drumcullen and Seir Kieran in their first two games but Belmont was their first real test and they failed it.

A big factor at this stage of the championship is the changing ground conditions. It has now moved from summer into winter hurling and while St Rynagh's, Kilcormac-Killoughey and Coolderry will be very comfortable in this, Birr won't be as they have a smaller, lighter team and conditions could take a toll on them.

Their next game against Shinrone will tell an awful lot and is really a must win for them as they won't want to be playing St Rynagh's in their last game having to win. It is also a make or break game for Shinrone as a defeat will put them out. Shinrone have found it hard going so far. They had a fine win over Ballinamere in the first round but then lost to Coolderry and Kilcormac-Killoughey were too strong for them on Sunday. Shinrone competed very well for a long time but were over powered late on as K-K won by 1-20 to 0-16.

Kilcormac-Killoughey have not proven themselves yet but they will be very happy with where they are. They have won their three games and have Drumcullen in their last game so they know a semi-final berth is within touch. That will be the time for them to fire on all cylinders.

Ballinamere are also up against it. They were poor in the first round against Shinrone but then played very well as they ran St Rynagh's close in a 1-18 to 0-19 defeat. They had to work very hard for a 0-17 to 0-15 win over a brave Drumcullen side on Sunday. Credit to Drumcullen for the way they fought but this was not a Ballinamere performance that suggests they can win the championship or even make a semi-final.

It is all getting very interesting from here on. A look at the final two rounds suggests that St Rynagh's can get to ten points and both Kilcormac-Killoughey and Coolderry will be on eight. You could then have two out of Birr, Shinrone, Ballinamere, Belmont and Kinnitty on six points and scoring difference deciding who goes through.

It means that most clubs have something very tangible to play for, there will surely be an upset or two along the way and the real championship begins from now on.