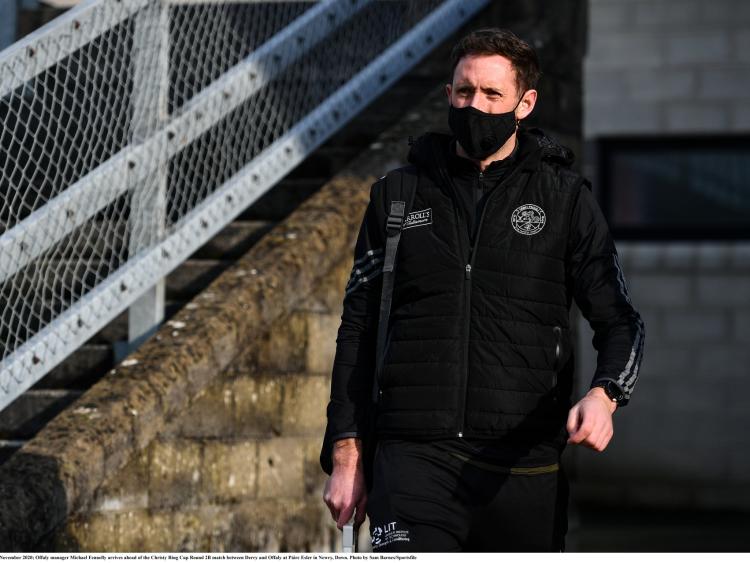 MICHAEL Fennelly remains fully committed to the Offaly hurling cause, despite Saturday's bitterly disappointing defeat by Down in the Christy Ring Cup semi-final.

Offaly were beaten on penalties after extra time couldn't separate the teams as their ambition of promotion back up to the Joe McDonagh Cup went up in smoke in Newry.

The Kilkenny folk hero was still absorbing what went wrong when he spoke on Monday and confirmed that he would be staying on for the second year of his two year term.

“I am fully, 100% committed. Our plan at the start of the year was to make improvements and if we do that, results will look after themselves,” he said.

“It is very disappointing, the aftermath of it is still not good. It was there for us and we didn't take it. Down were deserving winners,” the Ballyhale Shamrocks club man admitted.

He was far from searching for excuses but he did agree that the failure to award Eoghan Cahill's second half penalty goal was a huge moment – the Birr man's strike hit the back woodwork but amazingly, it was not spotted by officials who thought it hit the post.

“We motored well at certain times. Our discipline let us down with fouls and simple mistakes – controlling the ball, slipping and falling in the conditions, shooting, fouling. We were getting a foothold at that stage and the penalty would have put us five points up. The players closest to it made a case that it was a goal. The linesman on one side saw it and thought it was a goal but the referee didn't feel it was necessary to go to him. Sean (Stack, the referee) was in a very good position to see it himself.

“It is very hard for an umpire to see it. Eoghan hit it very well. Why not talk to the linesman? The referee did it with Noel McGrath in the All-Ireland final last year to double check what happened and that is the right thing to do.”

He has watched the first half of the game on DVD since Saturday and will analyse the rest of it in the coming days. “There was a lot of errors, ball handling and stuff. The conditions were tough. There was a line ball hit out over the sideline, that type of stuff.

“Our first touch was very poor. We trained in that type of weather for the last week or two. We really did plan for it. I know the conditions were not great but on the day, players couldn't get the ball into their hand. They took an extra touch and it was swipped away into a ruck. We didn't win enough of those rucks and breaking ball. Down won more of it.”

Asked to reflect on the year and failing to get promotion in league and championship, Fennelly remarked: “Our main goal was to win the Christy Ring Cup. In the league, we had to see how we got on. We were only in the role two or three months. It was a matter of seeing what players we had and what we needed to work on.

“We won the Kehoe Cuop. We beat Antrim in the final and it was a cracking game but we had twenty wides. Similarly, we had seveneen in normal time on Saturday, eight in extra time. You can't go through games with that amount of wides. Our discipline was not great.

“In the league, we were only milimetres away from the final and it was the same in the Christy Ring Cup. Against Antrim in the league, we were six points up and should have been eight. They got two goals to draw it. The boys played very well that day and we should have closed it out. Against Down, there were times when we could have drove on and our tails were up. The penalty was a big factor. It happens and you have to get on with it. Adrian Hynes hit the crossbar and Down hit the crossbar as well. It was very close. On one side, we fell down in terms of the Antrim and Down games but if we had won both, it would have been a very different year. The margin between success and failure is so thin.”

When it was suggested that the result and performance showed that Offaly were back in the Christy Ring Cup on merit, he replied: “It is not a flick of a switch. Underage is very important. It gives you an idea of how players are doing. Last year, Offaly were competitive in U-20 and they started well against Westmeath this year. This thing will take time. The lads are an honest group, they are ambitious and passionate. It is something to work with. They need to minimise errors and mistakes. The lads are absolutely devastated and I am genuine about that. It will take time. We have to build in the schools and clubs, that is a large part of where Offaly hurling is going.

“I am confident that what we are doing is right. We will go back to the drawing board and look at everything again. We have played Joe McDonagh and Liam McCarthy teams and we are not far away. We will regroup and go again.”

Fennelly talked about the disruption caused when Offaly had to concede a walkover to Kildare in their first Christy Ring Cup game after a player tested positive for coronavirus and the squad were declared as close contacts. “We had to lockdown for a week and a half after that and it didn't help. It was extra challenging. All those things play a part. Hurling is extra tough at this time of year. Ballyhale played Slaughneil in the All-Ireland club semi-final in Newry last January and we only won by the skin of our teeth. We could easily have lost. Games are won and lost on small margins and weather conditions are a big thing at this time of year.”

He insisted: “It was not from lack of effort. The boys showed a fair bit of character. Down got a goal to go two points up in extra time and we came back. We could have packed it in but didn't. They kept plugging and plugging. They are an honest group and they showed character. I know people will have different opinions and fair enough but they are an honest group and you can build on that.”

He was asked about the importance of bringing in new players to the panel.”We brought in a couple after play resumed. Adrian Hynes, Paddy Delaney, Joey Kinahan of Clodiagh Gaels. We brought in a couple we saw going well in club games. Is there a huge amount of players out there? Can anyone tell me eight or ten players who should be in there?”

What about Cathal Kiely? “Cathal was in with us earlier in the year and he dropped himself off the panel. He has a big size, is a lovely striker of the ball and is a key man for the U-20s. If Cathal wants to come back in, the commitment levels will have to be there. Gary Cahill is doing a great job with the U-20s and we worked very closely together.”

Cathal Kiely's older brother Cillian was one of Offaly's stars in the Christy Ring Cup campaign. It was suggested that the manager had obviously worked on trying to get the Kilcormac/Killoughey man to enhance his discipline. “Cillian Kiely is a talented player, an exceptional talent. Discipline plays a big part. He plays on the edge a lot and needs to reign it in more. In modern hurling, any high tackle is a red card. He is improving that and it is something for him to deal with. If he can clean that out of his game, avoid injury and is fully committed, he can go places. He played very well but he also drove a couple of wides and gave away a couple of frees as well as scoring a couple of points.”

Fellow Kilkenny star Michael Kavanagh and Galway's Johnny Kelly formed a management package with him this year along with Belmont's David Kenny. He is unsure if they will all be back - “We have to review the whole thing now over the coming weeks. Budgets are part of that. The County Board is in a very tight position in terms of funding and I need to talk to the chairman about all of this in the coming weeks.”

What were the positives from the year?

“Genuinely, the application and commitment from players was second to none.They are an ambitious and passionate group and they have huge interest in learning. I have no issues with any of that. These are very strong starting points. There are a lot of positives and they are willing to learn and develop. We now have more of a handle on the players we have. I know them much better and the areas we have to work on. We had a full panel as well, there were no injuries. That is always good. There is positives but it is a results business and they were not seen. We are building in certain areas and we are going to build further.”

Offaly didn't score a goal against Derry and only managed one last Saturday, was this an issue for you? “We did get two goals last Saturday, the penalty and Shane Kinsella's. Adrian Hynes hit the cross bar as well but we didn't test the goalkeeper enough. We did target that area, the need to score goals and create chances. We didn't do that. The half forward line was not going well enough and it is difficult to score goals if the ball is not going in. Shane Kinsella went well early on, he was sharp and looking good but then some high balls started to go into him. The delivery wasn't great.”