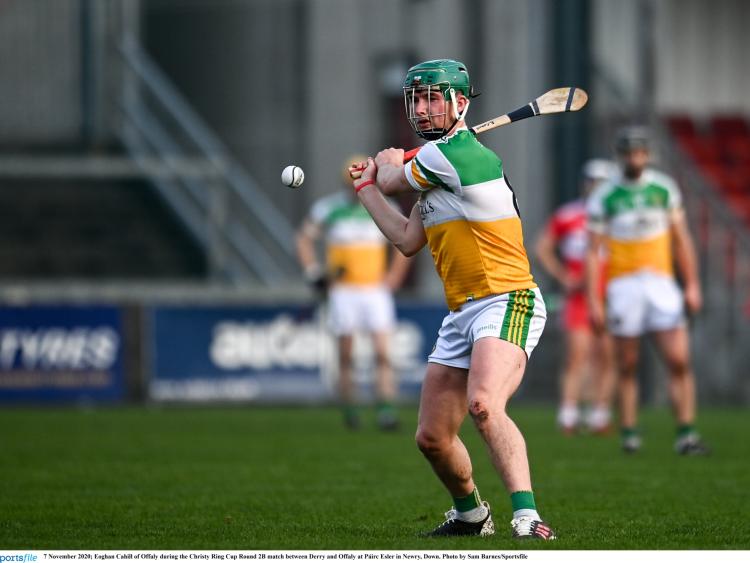 OFFALY suffered an absolutely devastating and disastrous set back when their dreams of promotion were ended in a dramatic Christy Ring Cup semi-final in Newry today.

Down won 3-2 on penalties after extra time failed to separate the sides and a shell shocked Offaly will take a long time to recover from this defeat.

Hot favourites to win promotion back to the Joe McDonagh Cup, Offaly gave a shockingly disjointed performance and while lady luck definitely went against them, their overall display was poor enough to justify a defeat.

There were huge pivotal turning points in the game. There was a controversial moment in the second half of normal time when an Eoghan Cahill penalty looked to have hit the back woodwork but was not awarded – more compelling video evidence will be required before definite statements can be made on that – while substitute Adrian Hynes was very unlucky to hit the cross bar with an instinctive shot near the end of normal time.

One of those goals probably would have got Offaly home but their general performance was quite dreadful. The weather was horrible with wind and regular rain. It did make underfoot conditions treacherous but Offaly never fully adapted to them. They were struggling the whole afternoon and there was only a brief spell in the second half when they looked to be finding the right tempo and intensity.

However, it was misleading as Offaly lost their way again and were quite happy to force extra time. They also had to come back in the second period of extra time to force penalties and Offaly's tale of woe continued here.

They took the initiative when Eoghan Cahill got the first goal and Marc Fisher's strike was saved by Stephen Corcoran. Brian Duignan (saved) and Paul Sheehan (over the bar) missed the next two before Aidan Treacy put Offaly two to the good – Conor Woods made it 2-2 with three each taken. Stephen Corcoran's tame penalty was saved and Caolan Taggart coverted for Down to level it up. Cillian Kiely's penalty was then saved and Down goalkeeper Stephen Keith blasted his home to put Offaly out.

It was a soul destroying defeat for Offaly. Relegated to hurling's third tier last year, they were desperate for a return to the Joe McDonagh Cup but it didn't happen. Sadly, Offaly's hurling on the day was very much of Christy Ring standard and they never found true momentum and form. They made far too many mistakes over the ninety minutes plus, spilling ball, making basic errors and allowing Down to prosper.

Any time Offaly did look like coming good, they made a mistake or missed a chance that kept Down in it and they very much contributed to their own downfall. Notwithstanding the doubt over Cahill's penalty, Offaly have only themselves to blame.

You have to feel very sorry for the management and team who tried so hard but it was a really shocking display by Offaly with very few redeeming factors. They had 25 wides over normal and extra time and some of these misses were from very decent chances. Offaly had more than ample chances to have won, despite not playing well, but they just weren't clinical or sharp enough on the day – and the weather can't be blamed for all that happened here.

It was unfortunate that Cillian Kiely should miss that last penalty as he was once again immense at the heart of the Offaly defence. He got three crucial points and made some spectacular catches. His physical presence was considerable and he mopped up a huge amount of ball.

Eoghan Cahill's frees kept Offaly ticking along. He got ten points, nine from frees, and while he was not as prolific as the previous Saturday against Derry, he was a major factor in Offaly being so close as he also did a lot of good things in open play. He went off at end of the first period of extra time – it was a questionable decision but he did look to be carrying a knock. Whatever the reason, his presence was immediately felt as Aidan Treacy and Stephen Corcoran all missed frees in the second period and Offaly only got to the penalty shootout by living on their wits.

Apart from that, it was such a mixed bag by Offaly. Ben Conneely had a lot of very good moments in defence, Shane Kinsella was very good in the first twenty minutes or so in attack and Adrian Hynes was very dangerous when he came on, causing a lot of problems for Down.

Apart from that, Offaly's performances ranged from the patchy with occasional positive flases to the very mediocre and there won't be many who will look back on this game with any satisfaction. Some of the players had nightmare afternoons and they will know this themselves.

There may be a hue of controversy about it but quite simply, Offaly won't get much of a hearing for any hard luck stories.

Offaly's first half performance in particular left an awful lot to be desired and elements of it were positively shocking. The weather was horrible and it was difficult to hurl in it but even that doesn't explain the volume of errors, many unforced, by Offaly.

Their handling, both of the ball and in terms of retaining their feet, was way below where it needed to be and a physical Down team rattled into them.

It happened all over the field. Paddy Delaney's mistake led to Eoghan Sands' first minute goal for Down as they took a 1-0 to 0-1 lead but forwards were equally as guilty. Oisin Kelly found the conditions particularly hard to manage early on, losing his feet on a few occasions while Liam Langton also fumbled a couple of balls.

Shane Kinsella did have a decent first half at full forward, showing well for the ball and his first half goal in the seventh minute was one of hthe few highlights of the first half for Offaly – Colm Gath picked him out with a great cross field ball and Kinsella finished very well. That gave Offaly a 1-3 to 1-1 lead but Down were clearly the better team for the next few minutes. They got back on level terms by the 13th minute and would have been out in front but for a couple of bad wides from frees by Conor Woods.

Oisin McManus's “65” edged Down in front, and Offaly were grateful that it hadn't been a goal as John McManus had a good chance of goal but his shot flashed across the posts before being deflected out across the end line.

Eoghan Cahill (free) and Kinsella got Offaly back in front before two Oisin McManus frees put Down ahead, 1-6 to 1-5. Two Cahill frees gave Offaly the lead, Down responded with two of their own to retake it and closing points from Peter Geraghty and Cahill (free) gave Offaly a 1-9 to 1-8 half time lead. Offaly were fortunate to be ahead and Down were certainly the happier of the two teams at the break.

Offaly continued to make mistakes early in the second half but they did show welcome signs of improvement. They upped the tempo and did things that bit faster, with the result that they began to get more on top all over the field. They were 1-11 to 1-9 ahead when a huge turning point arrived when they were awarded a 45th minute penalty after Liam Langton was fouled. However, Eoghan Cahill's well struck effort rebounded out of the woodwork, with the Birr man protesting that it had crossed the line. A later viewing of the incident suggested that it had hit the back woodwork and should have been a goal.

He did get a free moments later and further points from David King and Cahill (Free) gave Offaly a four point lead. Oisin McManus's free left it 1-14 to 1-11 at the water break. The catalogue of errors continued after the resumption as an under hit Stephen Corcoran pass put Ben Conneely under pressure – he tapped it to sub Dan Doughan who picked up and McManus's free made it a two point game.

The closing quarter was incredibly tense. Cillian Kiely pushed Offaly two clear but Down got back to level terms, 1-15 each with nine minutes left. A stunning long range free from Cahill put Offaly back in front and they were very unlucky when Adrian Hynes' great snap shot in the 66th minute hit the crossbar – the rebound fell to Brian Duignan who had a poor wide: Offaly had some very bad wides in the second half and Peter Geraghty will have been particularly disappointed with his two. Offaly had 17 wides in all in normal time and their finishing was very mediocre

A point from wing back, Barry Trainor levelled it at 1-16 each and Offaly were very happy to hear the final whistle and extra time as a devastating defeat was staring them in the face.

Offaly continued to make life very difficult for themselves in extra time. Cillian Kiely and Thomas Geraghty got great early points but Down equalised through Paul Sheehan (free) and Conor Woods (free). Dan Doughan had a bad wide before the impressive Adrian Hynes gave them the lead. Hynes and Eoghan Cahill (free) had poor wides before Sheehan equalised from a free and then Hynes gave Offaly a 1-20 to 1-19 lead at the break.

In the second period of extra time, Offaly survived on their seat of their pants. Down took the initiative with a Daithi Sands goal a minute after the restart and for a while, it looked like Offaly were gone. Aidan Treacy, who replaced Eoghan Cahill, had a bad miss from a free at the start of the second period but found the range to cut it to the minimum, ater Sean Cleary had a poor wide. Paul Sheehan put Down back two in front and the tension was incredible in the closing few miutes.

Liam Langton, back on, made it a one point game and Offaly's chance looked gone when Treacy and goalkeeper, Stephen Corcoran were wide with long range frees. However, a minute into injury time Offaly were given a soft free when Aidan Treacy was adjudged to have been fouled and Liam Langton tapped over the equaliser, 1-23 to 2-20.

See Midland and Tullamore Tribune on Wednesday for full report and analysis.