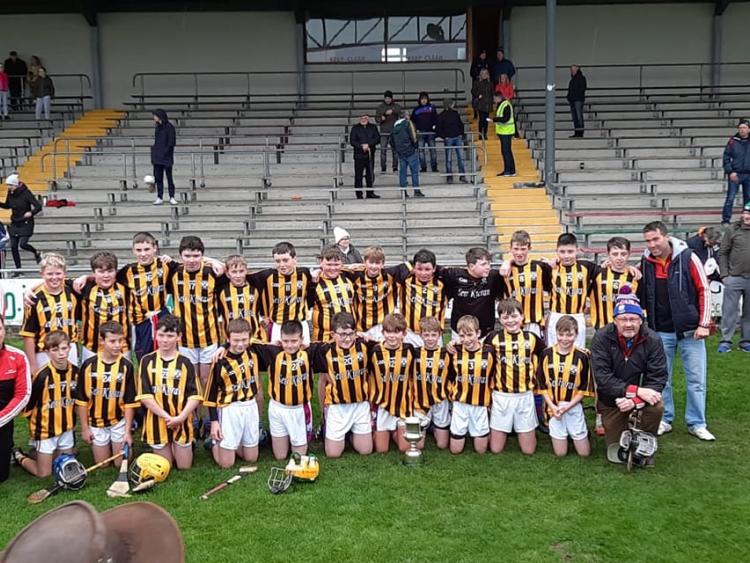 Drumcullen/Seir Kieran were crowned u13 hurling champions on Sunday morning following a 3-11 to 0-13 win over Kilcormac/Killoughey.

Although, the score line may suggest an easy victory for Drumcullen/Seir Kieran, this was by no means an easy win, and they were made fight for their victory against a gallant Kilcormac/Killoughey side who were very unlucky in the end.

Challenging weather conditions of a cross field breeze and an extremely wet playing surface had little to no effect on the quality of hurling in the opening quarter. It was Kilcormac Killoughey and Brian Guinan who opened the scoring with a ‘65’ first minute.

Drumcullen rose the green flag for the first time in the game two minutes later. A long ball by Máirtín Óg Ryan dropped in around the square, and it was Dylan Dooley who was quickest to react as he pulled along the ground and into the net. Sean Carey quickly followed the goal with a ‘65’ as Drumcullen/Seir Kieran settled well into the game.

Kilcormac/Killoughey also settled well into the game and adequately recovered from the goal, and scored four points in a row, with three coming from Odhran Fletcher frees and the fourth from captain Brian Guinan. A James Dooley point levelled proceedings at the first water break on a score line of 1-2 to 0-5.

The second quarter was just as tight as the first, as both teams showed great composure in front of the posts. Sean Carey and Odhran Fletcher both traded scores. A long range free from James Hennessy edged Drumcullen/Seir Kieran in front, but his free was cancelled out by a James Dooley point. Cian Mannion put them a point up and It looked as if they would have a slight lead at half time, but Michael Kelly pointed for Kilcormac/Killoughey just before the break to tie the game at half time, 1-5 to 0-8.

Sean Carey and Odhran Fletcher both traded frees again early in the second half. James Hennessy and another Carey free gave Drumcullen/Seir Kieran a slight lead, however points from Oisin Carroll and Brian Guinan levelled it again on the second water break.

With both teams struggling to pull away from each other, it paved the way for a thrilling end. Two frees from Odhran Fletcher for K/K and points from Carey and Ryan Hollywood for Drumcullen/Seir Kieran with just six minutes of normal time remaining, gave the impression that the game was heading for extra tine. However, Drumcullen/Seir Kieran had other ideas.

Máirtín Óg Ryan fired an unstoppable shot past a helpless Lochlann Fletcher in the K/K goals to put Drumcullen/Seir Kieran three points up with just three minutes remaining. This was quickly followed up by a Sean Carey free to give Drumcullen a huge advantage on the home stretch. Substitute Macdarra Murphy put the icing on the cake deep in injury time when he found the net to give Drumcullen/Seir Kieran a seven-point victory on a final score line of 3-11 to 0-13.

Full report in Midland and Tullamore Tribune on Wednesday.