Durrow next up in final 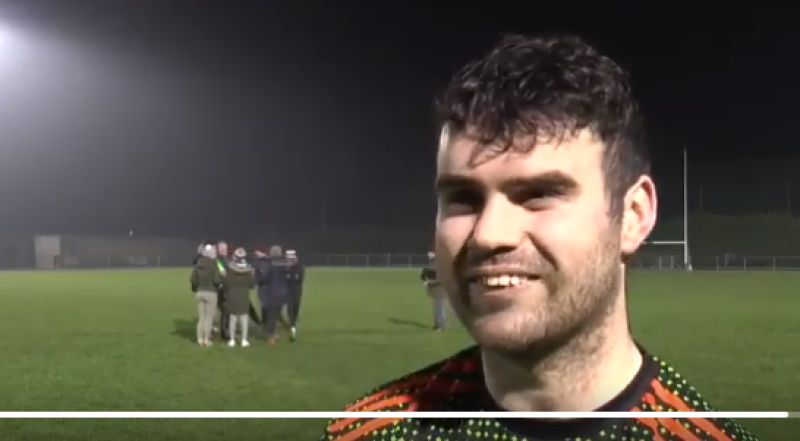 Jack Walsh turned the tide for Gracefield after coming off the bench.

TRAILING by 0-5 to 0-1 after 23 minutes, a seriously worried Gracefield pulled Jack Walsh off the bench and his influenve proved pivotal as they outscored Ballycumber by 3-8 to 0-6 in the closing 45 minutes (there was five minutes of injury time played in each half) to advance to a Senior “B” Football Championship final meeting with Durrow.

In a fascinating, gripping game that provided great entertainment, Ballycumber were superb for those opening 25 minutes as they carried the game to the hot favourites and put them on the ropes.

Relegated from senior last yar, Walsh's impact was even quicker than Gracefield could have dreamed. Almost in the blink of an eye, he booted two points over the bar and then he fed Stephen Flanagan for a 29th minute goal to give Gracefield a 1-4 to 0-5 lead. Ballycumber did well to respond with points from the super Keith Lawlor and inform Adrian Kelly levelling it up at half time, 0-7 to 1-4.

However, the dice was loaded against Ballycumber at this stage as Gracefield had the wind in the second half while Ballycumber midfielder Tom Corcoran picked up a black card for a tackle on Craig Dunne just before the interval, resulting in ten minutes in the sin bin.

Adrian Kelly put Ballcumber ahead on the resumption but their afternoon went generally downhill after that. Jamie Evans – more about a quite extraordinary game for Evans below – equalised for Gracefield and then Stephen Flanagan punched his second goal to the net with Walsh once again the provider – Walsh probably should have been given a penalty as he tried to manufacture space but when it wasn't given, he still got the ball across to the lively Flanagan who made no mistake from five metres.

Jamie Evans hit the crossbar with a pile driver monments later but the outcome now had an air of inevitability about it. Ballycumber fought hard, digging deep and got it back to two points, 2-6 to 0-10 by the 43rd minute but Gracefield's third goal a minute later dealt a fatal blow to their chances. Philip Hurley finished well after space opened up in front of him as he ran at a Ballycumber defence who backed off. Walsh added a superb point from play to make it 3-7 to 0-10 in the 48th minute and a six point lead was always going to be enough.

The game dwindled out fairly tamely from here with Gracefield outscoring the losers by two points to one. Ballycumber tried hard but a packed Gracefield defence kept them at bay and it ended up reasonably conmfortable in the end for the Laois border side.

Overall, however, it was anything but comfortable and Ballycumber really tested them in the first half. It has been one hell of an emotional year for Ballycumber with the sudden and untimely death of a former player and manager, Conor Conneelly shocking their tight knit community a few months ago – the former Roscommon footballer was a brother in law of the current manager, former Offaly star, Colm Quinn.

Their motivation levels were very high here and they tore into Gracefield with everything they had. Their work rate was terrific as they won several turnovers and they were full value for that 0-5 to 0-1 lead after 23 minutes.

Jack Walsh is one of Gracefield's main men and once they left him off, they almost certainly hadn't planned on introducing him in the first half but desperate times calls for desperate measures and it was really a no brainer. Before he came on Gracefield were really unsettled, struggling to get anything going and making a lot of mistakes.

Walsh showed his quality as he showed for ball, won it, kicked three points and sprayed simple but very effective passes all over the place.

On a different day, Jamie Evans would have been the star man on the field. The speed merchant caused all sorts of problems for Ballycumber, who never really got to grips with him. He caused havoc every time he was on the ball but his finishing was very erratic here, which is unusual for him. Evans scored one point but it could and probably should have been 3-3 – apart from hitting the crossbar in the second half, he was wide with a great goal chance right at the start while he was also off target with another clear one in first half injury time. He also missed a couple of point chances but Evans is one man that Durrow will have to earmark for special attention in the final as that volume of misses is very rare for him.

He was still one of Gracefield's main men on a day when Craig Dunne turned in a man of the match display at midfield, getting on a serious volume of ball, using it generally well and covering vast ground. Niall Smith was also superb beside him though Tom Corcoran was very good for Ballycumber in those first 25 minutes before getting that black card while his influence was never the same when he came back on,

Mark Ward and Tristan Lambe excelled in the Gracefield defence while Jason Slattery and Stephen Flanagan also did well in the attack.

Ballycumber can take solace from the fact that they gave it their best shot but came up against a better team. Alan Flanagan, Marcus Keena, Luke Gavin Mangan, Tom Corcoran, Joe Lowry and Cormac Quinn impressed at different stages while Keith Lawlor and Adrian Kelly had serious games in their attack, showing great finishing and intuition on the ball. Interestingly, all of Ballycumber's points came from play while 3-8 of Gracefield's were also from open play with just one point from a mark.

Full report in Tullamore and Midland Tribune on Wednesday.