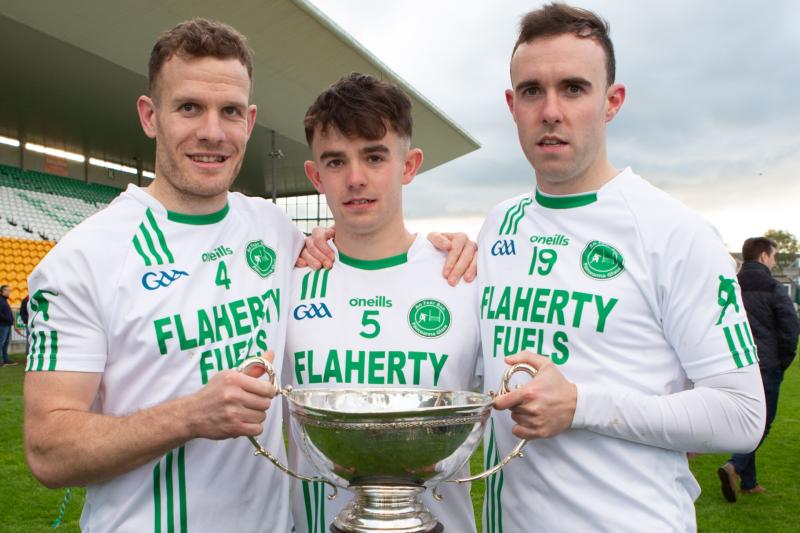 The Nally brothers, Shane David and James and Ferbane have started impressively in their defence of the Dowling Cup.

Ferbane progressed to the semi finals of the Tullamore Court Hotel Senior football championhip this evening following a 1-12 to 1-09 win over a spirited Shamrocks in Pollagh. Ferbane will now face Tullamore in the semi-final and are in a very decent position to retain the Dowling Cup while the defeat ended Shamrocks# year as they avoid the relegation play off.

Though they were on the ropes at times during a tightly fought game, Ferbane got crucial scores at crucial times and their leaders really stood up when the game was in the melting pot to seal their semi-final spot.

Shamrocks who were priced at 4/1 before the game threw in put up a brave fight and will be disappointed to end their year on a loss, however, it is a young Shamrocks side and there are plenty of positives that they will take from the game. They had Ferbane on the ropes at times and they genuinely looked capable of winning, however, ill-discipline ultimately cost them as they finished with 13 men following red cards for Nigel Dunne and David O’Toole Greene.

In the 17th minute Shamrocks won a penalty. A miskick by Nigel Dunne into the air dropped short and Andrew Delaney rose highest to claim the ball. He was subsequently brought down inside the small circle, and Paddy Dunican coolly slotted the ball past Jack Cullinan in the Ferbane goals to put Shamrocks two in front. Joe Maher and Nigel Dunne traded points before Ferbane got a goal of their own. A long ball from McGuire was sent in on top of Oisin Kelly and he grabbed it in the air before turning and burying a shot into the bottom left to put Ferbane 1-4 to 1-3 up at the half time break.

Shamroks started the brighter and a well taken score by Jack Bryant followed by a point from Paddy Dunican put them one ahead in the first five minutes of the second half. However, David Kelly and Joe Maher responded with points for Ferbane to regain their lead. Dunne answered with a point for Shamrocks after some nice work in the corner between himself and Andrew Delaney.

Kyle Higgins came on for Ferbane in the 35th minute and introduced himself to proceedings with a curling effort which went straight between the posts. Shamrocks were beginning to get frustrated as a result of some soft frees given against them and this was evident when their manager Mark Rooney was shown a red card by Marius Stones after having consulting in his linesman. James Nally found himself in a scoring position and the corner back made no mistake about putting the ball over the bar before Nigel Dunne and Jack Bryant put Shamrokcs level with 10 minutes left on the clock.

David O’Toole Greene was given a second red card (two black cards) for Shamrocks for a late body check and momentum swung Ferbane’s way. Two from Joe Maher, a point from David Kelly and another from Higgins powered Ferbane to a three-point victory to secure their place in the Championship semi-final on a score line of Ferbane 1-12, Shamrocks 1-09.