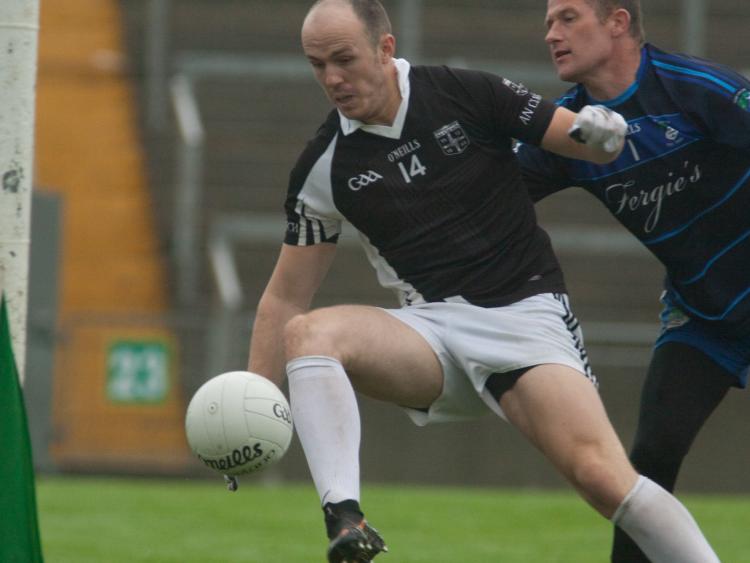 A YOUNG Clara side lived dangerously but still performed with great character to get the result they needed as they edged out Cappincur in a gripping Senior Football Championship tie in Croghan this evening.

In a game that had everything, great commitment, fine scores, good open football and the most human of mistakes, Clara did just enough to win by one point but it was a close run thing and Cappincur will look back on this as a most definite missed chance.

Shock winners over Tullamore in the first round, Cappincur also played with terrific spirit and bravery but their hearts will be heavy with regret as they reflect on a devastating defeat. They played well enough and over the course of the hour, they deserved at least a share of the spoils but instead they contributed to their own demise.

They conceded two penalty goals, one in each half and the second one particularly soft while they had ample late chances to get a result – goalkeeper Peter Daly didn't get a fourteen yard free off the ground, Sean Courtney and Eoin Carroll were off target with decent chances and midfielder Jason Gethings got a black card that ruled him out for the last half a minute plus almost six minutes of injury time.

It was that type of game and Clara to their credit played extremely well at times. They went with a youth policy with three of their most experienced players not starting – Ross Brady was injured, Scott Brady was not named on the panel while Thomas Deehan came on as a second half sub when he showed his experience by doing the simple thing very effectively. They looked a very exciting outfit when moving the ball with quick hands and running hard but they were decidedly average when they carried possession into the tackle against a physically stronger Cappincur side.

Ironically the really big winners were losing heavily enough to Rhode elsewhere – Tullamore have now lost two games but Clara's win keeps them in the hunt as they play them in their last game. If Tullamore win that and Cappincur lose to Rhode, as you would expect, there would be three teams tied on two points and with Clara's scoring difference very bad as a result of their first round hammering by Rhode, they are in a vulnerable position.

The game produced some outstanding individual performanes with Cappincur's Bill Carroll and Clara's Carl Stewart top of the class. Stewart did trojan work at centre half back, tearing up the field at every opportunity and his 26th minute goal was one of the highlights of a very entertaining evening. He blazed up the field, inter-changed with Josh Fleming and drove the ball to the net to give Clara a 2-4 to 0-4 lead.

With the wind on their backs, Clara were clearly the better side in the first quarter and Pa Smith's ninth minute penalty goal gave them a 1-3 to 0-1 lead.

They were good value for their 2-6 to 0-7 interval lead but Cappincur asked the most serious of questions of them in the second half. Eoin Carroll came into his own at midfield and his brilliant younger brother Bill continued to dominate the game – he scored four points over the hour plus and did a huge amount of positive things.

Cappincur got a lifeline when a mistake by Colm Doyle resulted in Bill Carroll sending Ger Treacy in on goal and the veteran centre forward made no mistake to reduce arrears to a point, 1-8 to 2-6. Cappincur had Clara on the ropes and points from Bill Carroll and Kevin Minnock pushged them ahead with 18 minutes left.

It was set up for them to win but Clara rallied superbly. Points from Graham Guilfoyle, who had a very good game and Pa Smith put them back in front and Pa Smith's 48th minute penalty goal, awarded for a foul on him after Peter Daly fumbled a long ball, really put them in the driving seat – Daly did make amends with an excellent 53rd minute save from Pa Smith who had a great chance to kill off the Cappincur challenge.

In the closing minutes Daly got a free and Eoin Carroll powered forward for two points while Clara's last score, a Cormac Delaney point was crucial as it gave them a three point injury time lead and the cushion to hold off Cappincur's desperate but ultimately unconvincing late salvage act.

See Midland and Tullamore Tribune on Wednesday for full report and match analysis.