Durrow set down serious marker in SFC “B” 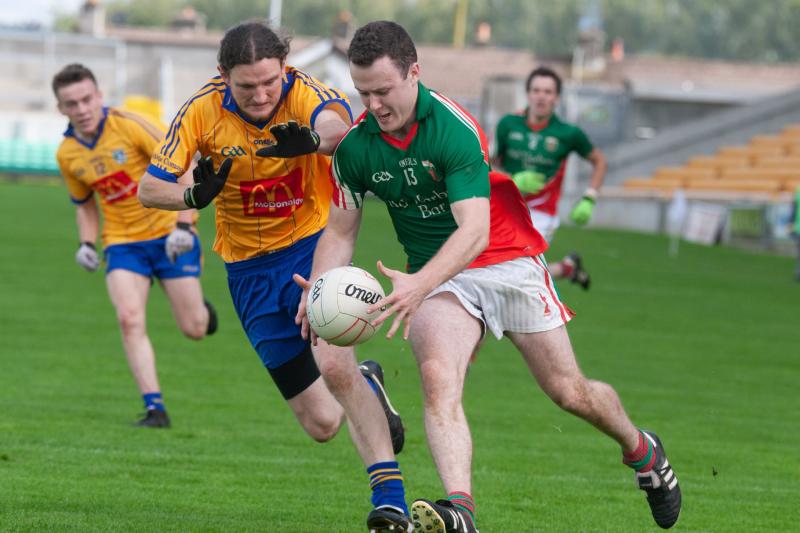 Durrow were very impressive in their SFC "B" win over Ballycumber on Sunday.

DURROW set down a very serious statement of intent when the Tullamore Court Hotel Senior “B” Football Championship got underway last weekend.

Their run away 4-11 to 0-6 win over last year's beaten finalists Ballycumber was the standout result in the opening round and while it is too early to make them the title favourites, it suggests that they will be extremely difficult to beat.

Reports coming out of the Durrow camp had suggested they were going well and so it proved as they recorded a big win over a club with designs on the championship.

Durrow led by 2-6 to 0-2 at the break and and almost doubled their score in the second half for a very impressive win. Trained by former Roscommon goalkeeper, Shane Curran, Durrow have made a big commitment to football this year and it augurs well for their prospects.

They also look to have most of the available talent on board and will be encouraged by the fact that key Ballinamere senior hurlers are commiting. Their team last Sunday evening included Offaly senior hurling panelists Brian Duignan and Ross Ravenhill while Ciaran Burke came on as a sub. Micheal Mooney played very well at centre half forward, scoring two points. A very talented underage footballer, Mooney has missed some games in recent years but his form is a big bonus.

Durrow also included the Molloy twins, Shane and Dan on their squad. Shane played on the half forward line while Dan came on as a sub and their return to action further strengthens Durrow hand. Former Offaly minor footballers, they didn't play last year but are good footballers who can contribute a lot at this level.

Durrow's win puts them out in front in group 2, where Ferbane had a very good 3-12 to 1-11 win over Walsh Island. Their win was a surprise but only a mild one, even though Walsh Island would have earmarked this as an absolute must win game.

In group 1, Gracefield and Tubber served up an enthralling game with Gracefield equalising with the last kick in a 1-11 to 2-8 draw. In the other game, Erin Rovers had to dig deep to beat last year's intermediate champions, Shannonbridge by a point, 0-11 to 0-10.

The early evidence suggests that this championship is very open. Durrow's form was compelling but they have lost big games in the past and there is a lot of football to be played yet.

Results in the Intermediate Football Championship went more or less as expected and there were no major surprises.

In group 1, last year's beaten finalists Clonbullogue were given a major fright by Kilcormac/Killoughey. Staring a devastating defeat in the face at one stage, they rallied late to win by 0-11 to 0-10. St Brigid's had an expected win over last year's junior champions, Doon, 1-10 to 1-7 with the underdogs giving a respectable performance.

The group 2 meeting of St Rynagh's and Raheen was a predictably tight and fiercely fought affair with the Cloghan based club edging it by 1-11 to 1-9. A fancied Ballycommon team also didn't have it all their own way as they just got the better of Clodiagh Gaels, 1-11 to 0-12.

The first round didn't throw up any definite title favourites and there are a number of teams with the potential to be champions. However, the stakes for the first round losers are now huge and a second defeat could spell the end for the.

Title favourites, Tullamore had a very comprehensive win over Rhode in group 2, 2-16 to 1-9 and they remain the team to beat. However, Daingean and Clara also showed their hands.

Clara had a big 5-10 to 2-10 win over Edenderry in group 2 and they fielded a fine mixture of youth and experienced. Their team included former senior stalwarts, Matt Mitchell, John Reynolds and John O'Hara and they were surrounded by a lot of good young players. Their display suggests that they can have a say in the destination of the Tom Quinn Cup.

Daingean had a very impressive win over a young Ballinagar side on Friday evening. Daingean hit the ground running here, playing some excellent football to kill off the Ballinagar challenge early on. The result and performance places Daingean firmly in the short list of title contenders while it also suggests that it will take time for this Ballinagar team to develop. They have a lot of excellent young minors available this year, players who have played minor football with Offaly and won underage medals with Na Fianna but it could take a couple of years for them to fully prosper in adult football.

Kilclonfert defeated Kinnitty by 2-9 to 1-7 in the other group 1 game. While Kilclonfert would have expected to have won this, they were still very happy to get off the mark against a traditional hurling club, who captured the Junior “B” Football Champioonship last year.