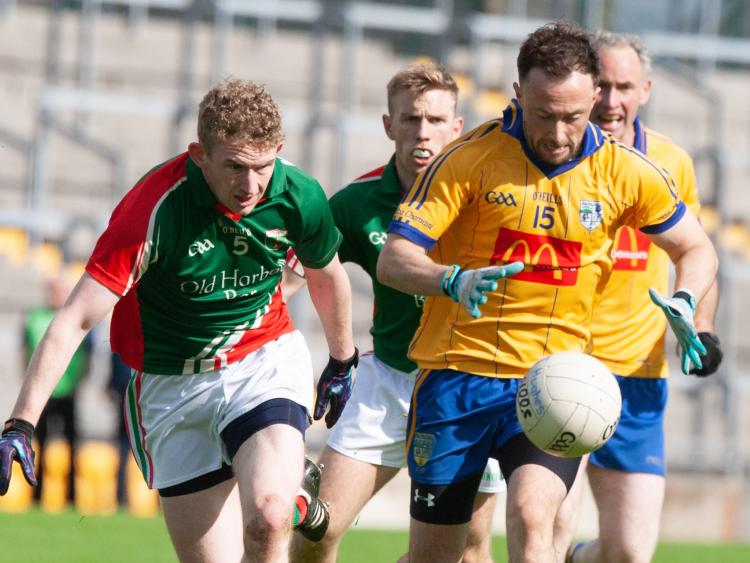 Durrow and Ballycumber meet this weekend.

SINCE being re-introduced in 2015, the Senior “B” Football Championship has proven to be one of the most competitive and exciting in Offaly. There has been something very pure and honest about the football here and part of its attraction has been the number of potential winners each year.

Even in the group stages, there has been some fantastic, thrilling and high scoring games and this year's competition will be awaited with great anticipation.

Gracefield's presence here this year makes it particularly interesting. Like Kinnitty in the hurling one, Gracefield have a huge, proud footballing tradition and an expectation to be at the top table. They have made a great contribution to successful Offaly teams, have won four Senior Football Championship titles and were bitterly disappointed to be relegated last year. Again and like Kinnitty, this has been coming for a while and was not a surprise but it was still a bitter pill for the club to swallow and they will be determined to get straight back up.

It will be far from simple and there does not appear to be much between Gracefield, Tubber, Erin Rovers, Durrow and Ballycumber. There is a temptation to include Shannonbridge in this list. They won the intermediate last year and have a very good team but we don't know how they will compete at the higher grade. They should hold their own and it wouldn't be a surprise if they did some serious talking to teams. We will have to wait and see but they certainly won't be out of depth in this championship.

Walsh Island and Ferbane are the outsiders. It is Ferbane's second team and like Kilcormac/Killoughey in hurling, they shouldn't be able to win the second tier competition. Ferbane have a good team, plenty of talented players but with respect to them, it would be a poor reflection on the other clubs if a second team took the spoils in a competition of this stature.

Walsh Island have the greatest tradition of all the teams in this championship and while they can beat any team on any given day, they don't look to have the overall depth in strength to strike the consistency needed. Some of their key players, Alan Mulhall, Willie Mulhall and others are now getting on in footballing terms, they haven't ready made replacements coming up the line and they are outsiders,

The form of Durrow will be very interesting. They were disappointed to lose the semi-final to Ballycumber last year but the appointment of Roscommon goalkeeping folk hero Shane Curran as their manager was a real statement of intent by them. Managing their dual commitments with Ballinamere hurlers is not simple but it has to be done and Durrow should be very strong this year. They certainly have the players to win this championship and their form will be watched very closely.

Tubber have been there or there abouts in recent years. Bernard Allen has a huge influence for them at this level and he is one of the top forwards in Offaly. With him on board, they are serious contenders.

Erin Rovers also have enough good players to challenge strongly. They have flair in their forward line, pace all over the field and are exciting to watch. You couldn't make them favourites at the moment but they are well capable of getting on a winning run.

Similarly, Ballycumber could go very close. They are such a steady football team and while they don't win every game they play, they rarely leave anything in the ta,. They have a lot going for them and have a chance.

Group 1 looks to be the strongest group on paper. It has three serious contenders in Gracefield, Tubber and Erin Rovers along with a Shannonbridge side who could prove to be very formidable opposition.

With just two qualifying, the stakes are massive and there will be pressure on Gracefield from the word go. They can blow hot and cold and they need players such as Jack Walsh and Jamie Evans to fire on all cylinder but they should be very strong at this level. Their first game against Tubber will tell a lot.

Every game is close to knockout in this group and it is one of the most open in all the championships. Expect Gracefield to come out and it is wide open for the second spot.

Group 2 looks a bit more clearcut on paper. It has Ballycumber, Durrow, Walsh Island and Ferbane and Ballycumber and Durrow are definite favourites to progress.

There will be surprises as the championship progresses and with teams preparing to very varying degrees during the Covid-19 lockdown, past form is not an accurate guide this year. We won't find out what way teams are, how fit and motivated they are until the action commences.

Gracefield are the fancy at the moment but their return to senior is far from guaranteed and there are plenty of teams who will relish the chance to keep them back.