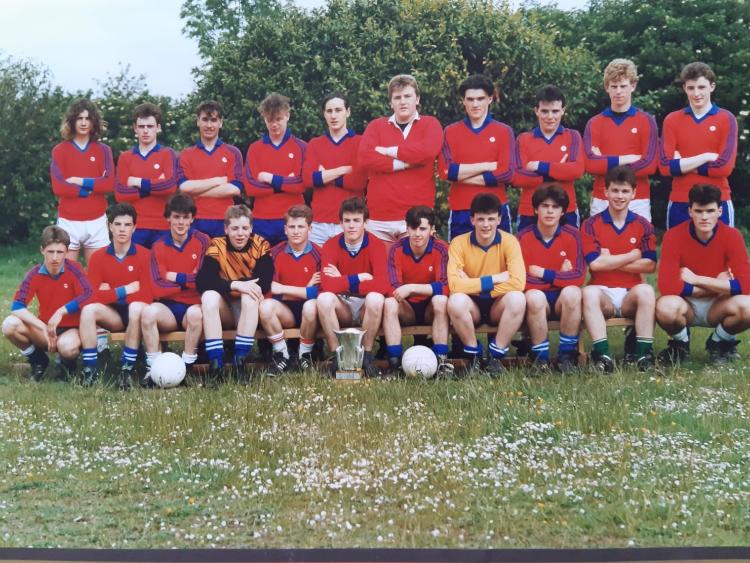 The Tullamore CBS panel that won the Leinster Colleges senior “B” football title in 1990.

BACK in 1990, the performances of the Colaiste Choilm, Tullamore senior football team generated massive excitement as they won the Leinster “B” title for the first and only time and went agonisingly close to reaching the All-Ireland final.

Then Tullamore CBS, I was a Leaving Certificate student there in 1990 and the momentum generated by the team that Spring created tremendous hype in the school, giving us a much needed release from the pressures of exams – many of the team were from my Leaving Certificate year while there were a handful of outstanding young footballers from fifth yeark including a future Offaly senior football hero, Ronan Mooney and the goalkeeper, Seamus Kelly who played senior football for Offaly before embarking on a professional soccer career that saw him prosper in England and the League of Ireland.

The team was captained by Kevin Martin, who went onto achieve national fame as an outstanding Offaly hurler in the 1990s, winning All-Ireland senior hurling medals and All-Star awards in 1994 and 1998 while he managed Offaly for a couple of years recently.

Ronan Mooney had the most successful football career from that squad and his performances at midfield were crucial as Offaly won the Leinster Senior Football Championship and National Football League in 1997 and 1998. His work rate and physicality at midfield was immense and he was a big loss when emigration took him abroad in the 2000s – it was also a cruel blow to his club Shamrocks and while he came home for some of their late games, they might perhaps have got across the line in the 2005 and 2007 county finals if he was home full time.

Kilcavan man Derek O'Connell went on to play senior football for Laois and he was a pivotal figure in 1990. Playing at number 12, his relentless energy and sheer will to win inspired many around him.

The performances of Tullamore's Damien Geraghty was also crucial and he was partnered by Brian Claffey at midfield – a broken leg ruled his twin Fergus Claffey out of their comprehensive 3-8 to 0-8 Leinster final win over FCJ Bunclody but was he also an excellent, very steady footballer who could prosper in any of the central positions.

Tullamore CBS had a very well balanced team, tight, tenacious defenders with Ronan Mooney at centre half back and Tullamore's John Rouse, one of the fifth year students and a long serving footballer and hurler for his club, at full back.

Brian Claffey and Damien Geraghty provided a very strong midfield pairing with Mucklagh man Claffey doing the holding role and Geraghty, a great talent, full of flair and the ability to conjure something out of nothing, roving all over the place.

They had skilful forwards inside with Kevin Martin, scorer of 1-2 in the Leinster final, a very effective link man at centre half forward – Martin had a lot of the ingredients to play football for Offaly but hurling was his game of choice. Killurin man Owen Dillon was a hugely effective full forward. An imposing figure, he could win any sort of ball and his clever and faultless distribution to the scorers beside and outside him was a crucial element in their game plan.

The free taker was a Tullamore man Gary Walsh and he scored 2-2 in that final win over Bunclody. The team was trained by teachers Liam Hastings and Murt Davoren – father of a future League of Ireland player, Iarfhlaith Davoren.

Their dreams of All-Ireland glory was ended by St Patrick's of Downpatrick in the All-Ireland semi-final replay – they were so close to reaching the final and the early dismissal of Damien Geraghty in the replay left them with a mountain to climb.

Many of the team went on to have good club careers but some of them didn't have the long careers you would have expected then. The Claffey twins were two who looked set for long productive careers but were gone off the scene quite early and that was a huge blow to the future Shamrocks GAA Club (a 1994 amalgamation of Mucklagh and St Carthage's). Wing back Keith Colsh, from Tullamore, played way more soccer than footballer while Gary Walsh, a son of Tullamore Harriers' stalwarts, Pat and Mary Walsh, and sub Derek O'Reilly also drifted off the scene very quickly.

Mucklagh man Alan Moore, a quiet unassuming corner back who got the job done very effectively and without fuss, played football for his club into the early 1990s (he is a son of the late Peter Moore, an All-Ireland medal winner with Meath in the 1960s and trainer of several teams in Offaly over the years) while the other corner back, Hamish Hopkins, also Tullamore and a very solid performer, never really played much football afterwards, before emigrating to Germany.,

One of the wing backs, Shane Buggy gave years of loyal service to Ballinamere as a hurler and footballer. Wing forward Peter Kelly, then Ballinmere, went onto be a long serving Tullamore senior hurler and footballer while Cappincur's Declan Farrell playedd a lot of very good football for his club. The above mentioned Damien Geraghty soon graduated to the Tullamore senior football team and played in their 1992 championship final defeat by Ferbane but didn't play much after that. His younger brother Stephen was also a very tidy skilful forward though he wasn't on that 1990 panel.

Owen Dillon played a lot of hurling with his club Killurin while Derek O'Connell has had the longest career of them all and has lined out for Kilcavan quite recently, mainly in goals.

There were other panel members that had sparse or no club career after it. The panel included Tullamore's Marcus Martin, John Rattigan, Paul Byrne and Alan Kelly with Martin's, Rattigan's and Kelly's football confined mainly to lower grades and Byrne not really playing much for them. Alan Kelly, a skilful forward, did play some good intermediate/junior football for them, though soccer was also his main game.

Ken Furlong, a long serving and very successful Tullamore senior football goalkeeper who also played for Offaly, was a Leaving Certificate student in 1990 and played earlier that year in goals before a knee and cartilage injury ruled him out – his son John is a key member of the current Colaiste Choilm team. Ken togged out for the final but wasn't an option because of his injury as he had an operation later that summer.