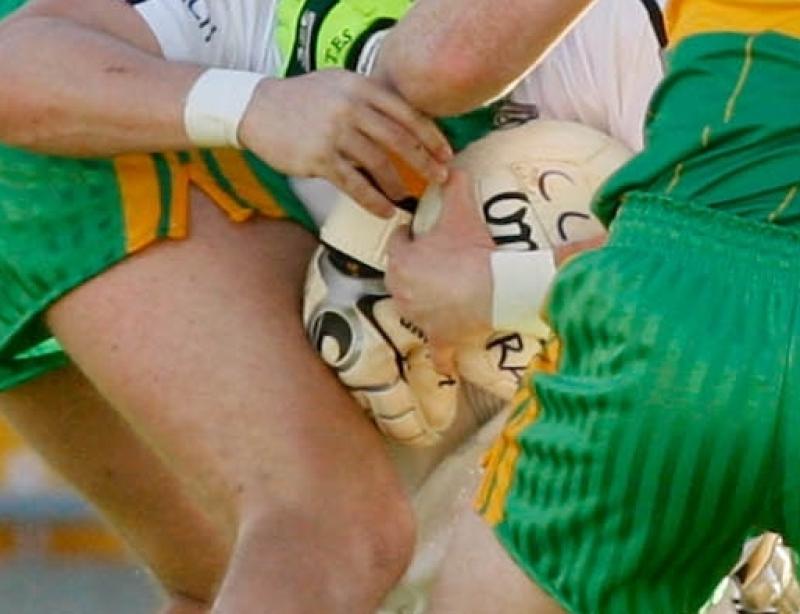 Ballycumber maintained their push for the knockout stages of the championship with a hard earned victory over Ferbane. The game was played in Ferbane on Saturday evening in brilliant sunshine. Despite the heat all the players kept going until the final whistle and served up a competitive game. Mel Guinan got the visitors on the scoreboard with the first point of the game. Kevin Kelly and Peter Dunne added a point each to which the home side replied with three points. Ferbane took the lead with a goal and at the other end Conor Connelly was just wide with a shot after a great turnover by Paul Kelly. Conor quickly made up for that a miss with a great shot to the corner of the net and the sides were level again. The home side added a point to their total to go in at half time leading 1-4 to 1-3.

Peter Dunne drew the sides level early in the second half after receiving the ball from Mel Guinan. The sided traded points with Peter Dunne from a free, two from the outstanding Andrew Grennan and a well taken score from man of the match, the soon to be married Mel Guinan, to three points from frees and three from play by Ferbane. A good move which started in the Ballycumber defence was very well finished to net by Kevin Kelly. Paul Kelly kicked a point with his left foot and a free from Peter Dunne completed the Ballycumber total. Ferbane added another point from play and were denied victory by a wonderful save by Peter Flynn in which he not alone saved a rocket of a shot but, he held on to the ball and cleared it to safety.

The final game in the group is a home game against Rhode.

Best wishes to St Manchan Gaels under 14 footballers as they travel to Slane, Co. Meath to participate in Feile Peile na nOg in Meath, Louth and Down. Their fixtures and results will be posted on social media.

St Manchan Ladies under14 team are also travelling to compete in Feile where they will be hosted by Naomh Mairtin C.L.G. Best of luck to the girls and management.

Best of luck to Brosna Gaels who will play against Lusmagh in Banagher on Sunday 1st July at 6pm in the Molloy Environmental Systems Senior B Hurling Championship.

The Brosna Gaels Junior hurlers will play Ballinamere in Ballinamere on Saturday 30th June at 7,30pm in the Junior A Hurling Championship.

Best of luck to Jack Quinn and Luke Gavin Mangan and all the Offaly Under 20 players and management in their Leinster Semi Final against Kildare in BNM O’Connor Park on Friday evening at 7.30pm.

Well done to Offaly senior footballers and management on their display against Clare on Sunday. The future looks a lot brighter now.

Offaly under 17 footballers who take on Louth in BNM O’Connor Park on Tuesday 3rd July at 7.30, are deserving of support.

St Manchan Gaels came up against a stronger St Broughans side in the Under15 Gold League Final in Mucklagh on Saturday evening losing out on a score of 2-15 to 0-8.

Congratulations to Adam Daly who won the Offaly Final of the Feile Football Skills competition.

Play lotto on line at www.locallotto.ie until 8pm on Monday or buy tickets from local shops, pubs and from usual lotto sellers.

Thanks to Peter, all in Flynns and everybody who supported the St Manchan's Ladies fundraising table quiz on Friday last in Flynn's Pub, Ballycumber. Thanks also to all who donated spot prizes for our raffle.

Thanks to Tony and all in Ennis Shop for their Feile fundraising hamper! Our u14s ladies head for Monasterboice, Co. Louth on Friday morning with games all weekend. Best of luck to Jackie, Ian, Pat, Grace and all the girls!

Our U14 ladies played an U14 league game in Mucklagh last Monday where they defeated Shamrocks.

Well done to our U12s who played Shamrocks on Monday evening.

Our Junior Ladies were defeated by Naomh Ciaran in the Intermedaite Championship on Monday evening in Doon.

Next week's Jackpot is €3,050 and the draw will be held during Bingo on Sunday, July 1.

Well done to Dion Conroy, Luke Kennedy and Adam Kelly who represented the Offaly under 16’s in their 0-16 to 0-6 win over Limerick in Ferbane on Saturday morning.

There were NO JACKPOT WINNERS. The TWO MATCH 3 WINNERS were Tom Darcy (c/o Darcys) and Patricia Hanley (c/o Online Lotto). Next week's jackpot increases to €4,000.

Daingean GAA ran a very successful launch night for "I'm a Celeb" in Maunsells Bar and Lounge last Saturday night. Thanks very much to all the contestants who have signed up for the event and to Maunsells for hosting the night. If Saturday night is anything to go by, the event on the 28th of July should be a great night of entertainment.

When these notes have gone to print Rhode U15 footballers have played Tullamore on Tuesday 26th June in Gracefield in the League Final.

Very best of luck to Rhode U13 footballers who play Ballinamere/Durrow this Wednesday 27th of June in Ballycommon at 7pm.

On Saturday last Rhode U11s hosted visiting teams Templeogue Synge (Dublin) and Corralstown/Kinnegad (Westmeath) in a series of friendly games. With the sun shining and the pitches in perfect condition 8 games in total were played across our two main fields. Once again the standard of Football was of a very high calibre with excellent fielding of the ball and some natural goalkeepers on display. A huge note of thanks goes out to the parents who provided food and snacks, a special word of thanks to all who stayed on and helped with everything on the day itself with over 100 kids and adults fed. It's this support that makes our village and GAA club a special place for our children. We would finally like to thank Pat and Willie and their management teams for bringing their teams over for the blitz and look forward to further challenge games.

Offaly had an excellent start to the game but Clare came bursting back which could have went poorly for Offaly but Offaly kept on battling and it was a draw at half-time. It was ding-dong in second half with Offaly getting ever closer but unfortunately Clare kept the gap to 2 points. Final score Offaly 2-14 Clare 1-19

Despite a two-point loss to Clare on Sunday afternoon Offaly Footballers and management can hold their heads up high in how they changed things around in 5 weeks to bring pride back into Offaly football. Bring on 2019

The Semi Final and Finals for the Leinster Community Games takes place in Trim on Saturday July 14 a bus will be leaving O'Toole's Car Park around 8am for the players/parents. Should anyone be interested in taking a seat on the bus please contact Declan Curley on 0872849584. Limited number of seats available.

The annual Rhode GAA Cul Camp will commence in Fr Dowling Park on Monday 16th July to Friday 20th July. The camp will start each day at 10am and ends at 2.30pm. It is a wonderful experience for the 6 to 12 year old boys and girls to play games, meet new friends and to practice the skills of our native games. The camp in Rhode is recognised as a top class camp. For further information please contact Tracy Murphy Minor Club secretary or or Offaly GAA Cul Camp organiser/ coach Liam O'Reilly on 087407212. Cul Camps across the county are filling up fast so get booking to avoid disappointment

Rhode Junior B footballers were due to play Shamrock's on Friday evening but game was postponed late in the evening and will be refixed a later date.

Well done to all who competed in the County Track and fields on Sunday last in Tullamore Harriers.

There was no winner of the Rhode GAA Lotto Draw that took place on the 19th of June for a Jackpot of €15,000. The numbers drawn were 7 11 25 29. The club would like to thank all those who supported the draw and thanks to Killeen’s for the use of their premises and for their help and cooperation. The following matched three numbers and received €200: Sam, Finlay, Jack and Charlotte c/o Heavey’s. The Rhode GAA Lotto is the main source of income the club has and now you can play online through our website. The good news is when you play the lotto online you are entitled to free draws, for example, pay for seven draws, receive the eighth one free, pay for fourteen draws receive two free and so on. In other words, the more you play the more free draws you are entitled to.