An excellent finals with fine scores on both sides 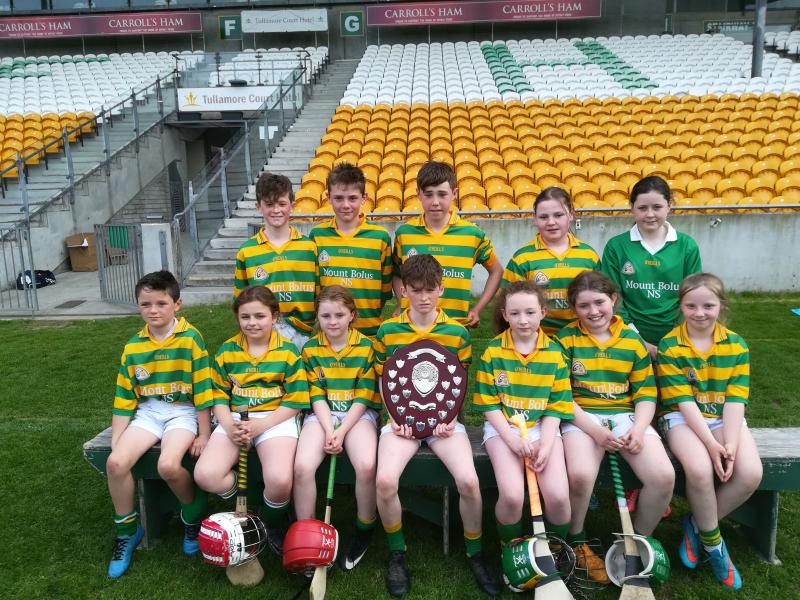 This game was a fantastic display of hurling from the very first minute as Brecon Kavanagh found the net from long range for Mountbolus. Leigh Kavanagh followed suite with a point before a goal from Kilcormac/Broughall's Aaron Dalzell sparked the game into life.

Leigh Kavanagh looked a real star of the future and he scored two points without reply after ten minutes before Faustina Egan fired back for Kilcormac, making it 1-3 to 1-1 in favour of Mountbolus.

Leigh Kavanagh was in free-scoring form and he fired over another free after 12 minutes before Kilcormac/Broughal got another goal thanks to Aaron Dalzell.

It was end to end stuff in this absorbing game and Leigh Kavanagh pointed again for Mountbolus before Odhran Fletcher retaliated for Kilcormac. Aaron Dalzell then goaled again, and with goals worth two, that put Kilcormac/Broughall into a 3-2 to 1-5 lead.

Brecon Kavanagh wasn't to be outdone and he fired a goal for Mountbolus in the 16th minute but the ding-dong battle continued thanks to another goal for Kilcormac/Broughal, this time from Odhran Fletcher. Two late first half points from Mountbolus sharpshooter Brecon Kavanagh left the game finely poised at the break with his side ahead by one, 2-7 to 4-2.

A Richard Casey point pushed the Mountbolus lead out to two and the gap remained the same as the sides shared four points evenly between then and the 30th minute.

At that point, Mountbolus took over, led primarily by Leigh and Brecon Kavanagh who built attack after attack. Leigh hit 1-3 without reply between the 30th and 33rd minutes, putting his team into a 3-13 to 4-4 lead.

Brecon then followed suite with 1-1 as a ten-point lead opened up between the teams. A late goal from Odhran Fletcher and a point from Aaron Dalzell was not enough to halt Mountbolus and player of the game, Leigh Kavanagh rounded out the win with a converted free in the dying seconds.