It was a fiercely contested game from the first minute 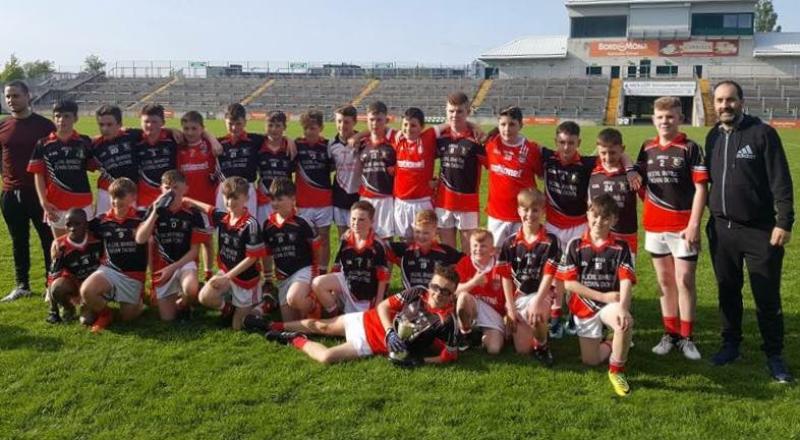 Mucklagh enjoyed the ideal start here thanks to a brace of frees from powerhouse Cian Buckley but as Edenderry's Jake Mooney grew into the game and got to grips with the Mucklagh dangerman, his team settled into a good rhythm.

Sodiq Ogunse got a good point before Buckley fired over two more to put Mucklagh into a 0-4 to 0-1 lead. Scoil Bhride then cut the deficit thanks to James Lynch but Luke Guinan kept the Mucklagh lads in a comfortable lead.

The Edenderry team were continually growing in confidence and stature around the middle and it was good work from Jake Mooney that led to Tom Bergin burying their opening goal. The Reds were buoyed by that goal and followed it with a pair of points from Ogunse and Mooney himself getting on the scoresheet.

Mucklagh, however, finished with two points from Peter Feeley in the last five minutes of the half, and with goals worth just two points, they went in at half-time with a 0-7 to 1-4 lead.

The second period was a real arm wrestle but as Mucklagh's shooting seemed to go astray, Edenderry, under the guidance of former Offaly defender Niall Spain, held their nerve and controlled the pace in midfield.

They levelled the game early in the half through Jake Mooney and five minutes later they hit the front thanks to another point from Sodiq Ogunse. As a tense atmosphere filled O'Connor Park, recognition of such a close battle, Mucklagh drew themselves level again thanks to a Peter Feeley free.

On 35 minutes, James Lynch edged Scoil Bhride back into the lead and a real duel for the remainder of the game saw some great tackling and some wayward shooting, but Edenderry ultimately held their nerve to claim a narrow 1-7 to 0-8 victory.