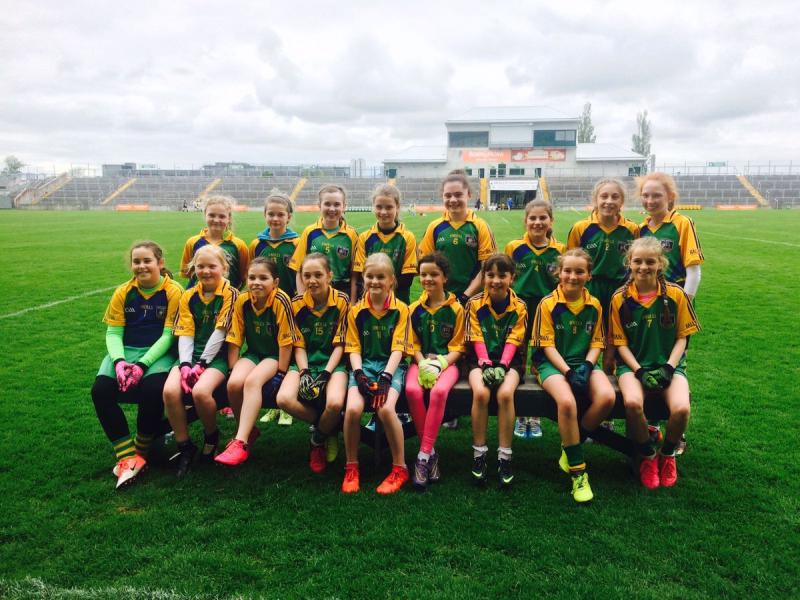 The Ballybryan team defeated in the Cumann na mBunscol final

Ballybryan shot out of the blocks in this contest with Grainne Foy scoring two goals within two minutes for the villagers. Ballinagar, however, soon settled to the task with Millie Daly mopping up most of the kick-outs.

Millie was instrumental in a move that saw her teammate Ella Cuskelly fire past Heidi Dunne in the Ballybryan goal in the 3rd minute. The local rivals were level on five minutes when a brilliant crossfield ball from Abbie-Rose Fisher found Ellie Dwane who fired to the net, leaving the scores a 2-0 apiece.

Grainne Foy continued to look lively and pointed for the Rhode school just seconds later, but then Ballinagar really took a hold in midfield. Ellie Dwane had secured her hat-trick before the 15th minute as she bagged two more goals, including a bullet to the top corner from open play.

Millie Daly then stepped up to point from a free as Ballinagar raced into a 4-1 to 2-1 lead. Ella Gorry and Faye Dunne traded points in a highly skilful and absorbing contest in O'Connor Park. Ballinagar finished the half with a flourish with three points from Dwane, Daly and Joan Tynan, putting them into a 4-5 to 2-2 lead at the break.

Grainne Foy again nabbed the first point of the second period for Ballybryan as they set about making a comeback but Millie Daly was just too strong in midfield. She set up attack after attack as Ellie Dwane and Abbie-Rose Fisher retaliated with points of their own for Ballinagar.

Taylor Quinn and Faye Dunne hit points for Ballybryan around the 27-minute mark before an Abbie-Rose Fisher goal once again had them on the back foot. Ella Gorry got herself on the scoresheet as Ballinagar led 5-7 to 2-5 with just over ten minutes to play.

The Rhode school did continue to push and scored 1-3 in the final moments, thanks to a goal and two points from Grainne Foy and another white flag from Faye Dunne. During the same period, Ballinagar almost matched their opponents with a goal and a point from Abbie-Rose Fisher and a final point from Joan Tynan sealing a 6-9 to 3-8 win.