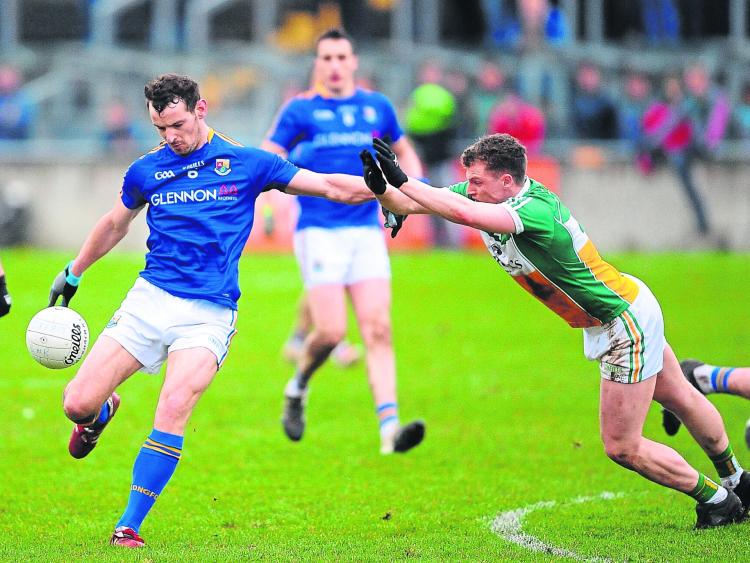 Offaly football manager Stephen Wallace has revealed that he will have a selection headache this weekend after April resulted in a number of injuries for his county panel.

Offaly look increasingly likely to be without talisman Peter Cunningham for Sunday's Leinster opener with Wicklow in Portlaoise after the Bracknagh man suffered a recurrence of his ongoing groin injury.

Speaking about Cunningham, the man who scored 1-2 in an inspirational performance against Westmeath on the last day of the Allianz National League, Stephen Wallace told the Offaly Express that he is "extremely unlikely to play."

"We'd also have serious injury doubts at the moment over Eoin Carroll, Sean Pender, Michael Brazil and Jack Egan," the manager said, "while Joey O'Connor is also a long-term absentee after breaking his hand playing hurling for his club, St. Rynagh's.

"It is what it is, and if we've lost them for the game itself, there's an opportunity for other lads to put their hands up," Wallace commented.

Wallace will also be without youngster Cian Johnson who has fallen foul to an Offaly County Board rule that bars U20 eligible players from choosing the senior grade over their own age group. Wallace is disappointed with the decision but said "we have to move on with the players we have."

SEE ALSO: 'Nothing else matters' - Offaly captain not looking past Wicklow

The Kerry man has received a welcome boost in recent weeks with Ruairi McNamee returning to the county fold after a spell travelling in Australia. "Ruairi is in relatively good shape and is certainly a good option to have," Wallace said. "I watched in a number of times for Rhode last year and he was a player well in truly in my plans before he went travelling," he added.

Cathal Mangan, Karl Dunne and Stephen Wrenn have also joined up with the squad after a tumultuous April took its toll on the Offaly camp.

Offaly open their Leinster account this Sunday at 4pm in O'Moore Park, Portlaoise, against John Evans' Wicklow. The winner will face Dublin at the quarter-final stage.