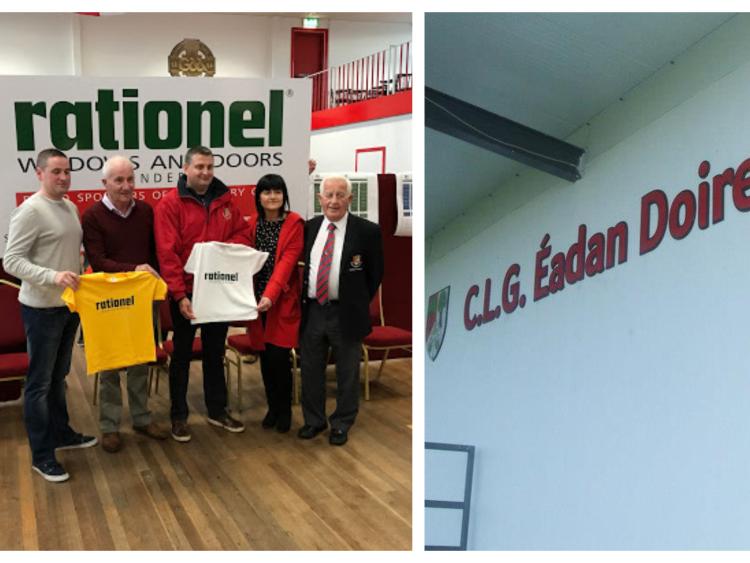 Edenderry GAA have announced that Rationel Windows & Doors are the proud new sponsor of the club.

Following on from the successful sponsorship of the All-Ireland Mini leagues last Autumn, an agreement was reached for Rationel Windows & Doors to become the club's new main sponsor.

The sponsorship deal runs from 2018 to 2020 and was formally ratified at Wednesday nights executive committee meeting. "The deal represents a significant coup for the club to have such a successful and prestigious sponsor on board," a statement read.

Rationel Windows & Doors, who operate from Monasteroris Industrial Estate in Edenderry, are a Danish company that have been based in Edenderry since 1987 and are the market leaders in Alu-Clad windows.

Their windows are regularly used on RTE's Sunday night hit show 'Room to Improve' with Dermot Bannon and they have featured on some memorable episodes recently in the revamp at Daniel O'Donnell's house in Kincasslagh and last year at former Westmeath footballer Dessie Dolan's house in Moate.

Chairman of Edenderry GAA Willie Forde was delighted with the news of the new deal and said it is a huge boost for everyone associated with the club.

"This is brilliant news for everyone involved. We're thrilled to announce Rationel Windows & Doors as our new club sponsor. It is a three year deal and will cover every team in the club from U7 right through to senior and of course our All-Ireland mini leagues which were a roaring success last year. Rationel have always been a great employer in this town and we're looking forward to a very successful partnership."

The official club launch of the sponsorship will take place on April 6 in the clubhouse.