It was a weekend of high drama for this team 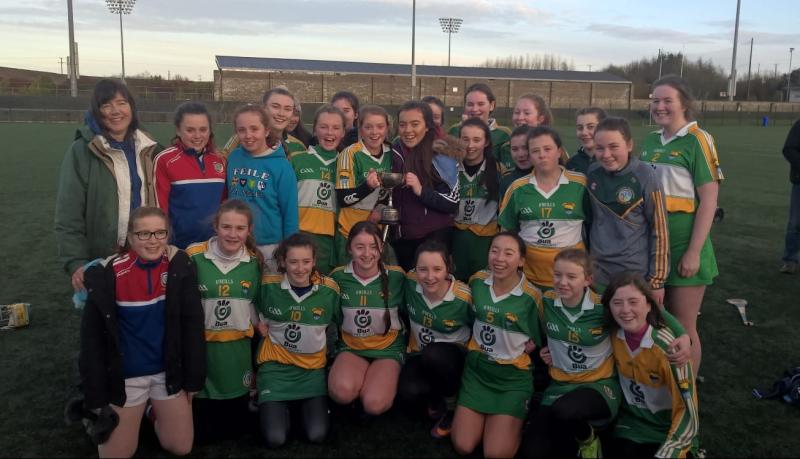 Coláiste Naomh Cormac U16 camogie team followed the success of their U18 counterparts with a narrow win in the Leinster final on Saturday, February 3, but in a cruel twist of fate, had to play their quarter-final the next day - a game they lost.

The Leinster decider was played in St Loman's Mullingar, and the Offaly outfit took on a strong Trim team who had defeated Coláiste Naomh Cormac in last year’s final.

The first half was a tight affair with a Trim goal giving them the early advantage. Scores from the Cayla Fletcher and Jane Lowry left Coláiste Naomh Cormac one point behind at the break.

With only minutes remaining Jane Lowry buried a penalty to bring the game level and in a grandstand finish scored another free to put Coláiste Naomh Cormac ahead for the first time.

With scores at a premium, Jane Lowry’s scores were crucial and her 1-1 in the final minutes will live long in the memory. Younger members of the team, Stephanie Mahon, Sarah Fitzgerald and Caoimhe Quinn can be very proud of their displays.

Their strong finish showed the fighting spirit that’s in this team and the defensive display from their backs keeping Trim to 1-3 proved to be the difference on the day. Final score CNC 1-4 and Trim 1-3.

Due to a backlog of fixtures and being faced with giving a walkover, Coláiste Naomh Cormac had to prepare themselves for an All-Ireland quarter final the following day against Loreto Balbriggan.

Another tough game and again following a slow start from the Coláiste Naomh Cormac girls, Balbriggan scored an early goal to give them the edge.

The Balbriggan goalkeeper made some fines after good work from Lauren Leonard and Cayla Fletcher and with Aine Leonard and Chloe Hennessy playing very well in defence, Jane Lowry kept Coláiste Naomh Cormac in the game from placed balls and they went in two points behind at half time.

After a slow start to the 2nd half and it looked like those missed chances in the first half would come back to haunt Coláiste Naomh Cormac, but they stormed back into the game in the last 20 minutes.

Grace Leonard, Niamh Hayden and Rachel Guinan took control around the middle of the field, getting the possession into Jane Lowry, at this stage playing at full forward and causing huge problems for the Balbriggan defence scoring two goals in the final stages of the game to leave the final score CNC 4-6 to Balbriggan 2-3.

Huge credit to Ms Kinsella and all the girls involved, winning two tough games over the same weekend is a great achievement.