News from GAA Clubs across Offaly

To have the news from your local GAA Club included simply e-mail them to news@offalyexpress.ie

Intermediate Hurling: Brosna Gaels put in a good performance in the Molloy Environmental Systems Offaly Intermediate Hurling Final on Sunday in Bord na Mona O’Connor Park. But, Ballinamere were just that bit stronger and ran out winners on a 0—16 to 2—5 scoreline. Well done to all involved and they can look forward to playing in the new Senior B Championship next year.

Tidy Towns: Congratulations to Ballycumber Tidy Towns Committee on the marks achieved in the Supervalu Tidy Towns competition. The comments of the Judges were very complimentary and must give confidence to gain more marks next year.

Ladies Football: Naomh Ciaran ladies footballers run in the Leinster Ladies Football Intermediate Club Championship came to an end when they were defeated  4—10 to 2—11 by St Maurs , Dublin in Rush on Saturday.

Lotto Results: The lotto numbers drawn this week were 11,15, 22,23.  No jackpot winner. One match three winner. Next week’s draw will be held in Stewarts on Monday night at 10 o’clock for a jackpot of €2600. Play lotto on line at https://www.locallotto.ie/ localhome.asp?LL_ID=415 or buy tickets from usual lotto sellers.

“G.B.F” Get Ballycumber Fit: Meet at Ballycumber GAA Pitch on Monday, Wednesday and Fridays at 7.30pm until Christmas.

Edenderry U14 Ladies: Edenderry GAA would like to wish our under 14 girls the very best of luck in the county final this coming Saturday September 30th. The girls are going for a two in a row after claiming the title in 2016, but are up against strong favourites Shamrocks who have been undefeated all year. Time and venue has still to be decided and will be announced early this week - all support appreciated.

Kilmacud Crokes Ladies Football U14 7-A-Side All Ireland Competition: Edenderry Under 14 girls represented Offaly in the Kilmacud Crokes ladies All Ireland 7 a side competition on Saturday last. The girls played 3 group games, losing by a point to Kilmacud Crokes and defeating Doora Barefield (Clare) and Drumgoon (Cavan) meaning they finished joint top of the group on 4 points. However after the scores were totted up they lost out on goal difference which left them in the last 16 of the plate competition. After defeating Mahercloone of Monaghan the girls then played a quarter final against Castlerahan of Cavan and after a very close affair the girls lost narrowly on a scoreline of 3-5 to 2-6, but can hold their heads high after giving their all. The plate competition was eventually won by Kilkenny City who have had a tremendous year having also defeated Edenderry on the way to winning the all Ireland Feile competition in June of this year. 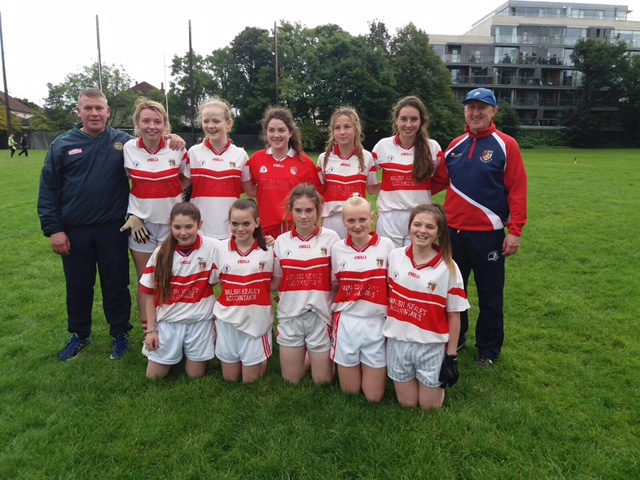 Bingo and Lotto: Bingo as usual every Sunday night at 8pm in Clubhouse.  BINGO JACKPOT now stands at €3600 in 45 calls or less. Total prize money on offer at Sunday night. Bingo is now in excess of €6000. Ample supervised car parking. Doors open at 6.30.

There was no winner of the Lotto Jackpot at this weeks draw, the numbers drawn were 8, 9, 21, 24, bonus 26. Next weeks jackpot will be €10900. Congratulations to Geraldine Hogan who matched 3 numbers and collected 400 euro

Edenderry Mini All Ireland Leagues: The Rationel sponsored All Ireland leagues continue this week for U6/U8 on Tuesday and Thursday U10/U12 at 6:30pm. All fixtures and league tables can be viewed on www.edenderrygaa.ie or Edenderry GAA facebook page. The club would like to thank all the new and existing coaches that have come on board to help make this a great community event.

County Final Meet and Greet with Rhode Senior Team: Everyone from the parish especially our under-age players from Rod Og and Rhode Ladies are invited to attend the meet and greet on Friday 6th of October at 7:30pm to support the Senior Footballers and their Management Team as they get ready for the County Final. Presentation of U,13  Team Leinster Winners Medals will be made by the Senior Team. Also on the night you can Pre-register for the Rod Og Croghan Hill Fundraiser

Rod Og Fun Fundraiser Croghan Hill Challenge: Rod Og are holding a fun fundraiser  to raise money for the up keep of our under-age teams and to further their footballing abilities  on Saturday  October 28th 11:30am . Its a day of fun also enjoy the thrills and spills of the Croghan Hill Challenge  Adults @ €20. Students (over 16)  @ €10  All participants will be entered into a free draw for great prizes. On the Saturday night  there will be live music, raffle and refreshments from 9pm in O'Toole's' Lounge Rhode. For Further details contact Rod Og Club Contact Tracey Murphy 087-2664435.  Stephen Darby 086-8452132 .A Pre-registration evening will take place in Fr.Dowling Park on Friday 6th at 7:30pm.

U-12 Boys: On Saturday last Rhode played Mullingar Shamrocks in a challenge game in Fr.Dowling Park where an exhibition of football was giving by both teams and final score was Mullingar Shamrocks 6-6 Rhode 3-13. A massive well done to the lads on a great game and their management team. Thanks to Mullingar Shamrocks for travelling up. A  word of thanks to the parents who made sandwiches and served up refreshments on Saturday with a special thank you going to Regina Swaine. Team: Joshua Kellaghan, Ethan Hannon, Liam Walsh, Cian Cocoman, Sean Daly, Cameron Egan, Matt Heavey, Noah Swaine, Ben Kennedy, Ryan Murphy, Ross Kellaghan, Gavin Murphy, Charlie Cullen, Ryan Quinn, Billy Quinn, Nathan Glennon, Dylan Kilmurray, Jamie Glennon, Eoghan Kiilmurray, Eoin Murphy, Tadhg Swaine, Leon Kilmurray.

U-8s Boys: Our U-8s travelled to the faithful fields on Saturday last to to take part in a blitz where they played Shannonbridge, Tullamore and Ferbane where they gave an excellent display of football . A massive thank you to the management team, Parents and especially our u,8 boys for an excellent year.

Handball: Very best of luck to David Hope & Noel Murphy who are in the 60/30 finals in Limerick on Sunday 8th of October at 1pm in Limerick .

Rhode GAA Golf Classic: We are holding our Golf Classic on 21st of October in Highfield Golf Club.
Team of 3 €100 The Format is Three-ball Scramble  with excellent prizes up for grabs.   Refreshments provided by Dempseys Butchers. To book Tee Times and for Further information contact Oliver Murphy  0877087117 or Ger Hynes 0868143622

Lotto: There was no winner of the Rhode GAA Lotto Draw that took place on the 25th of September for a Jackpot of €15,000.  The numbers drawn were 9 14 23 25.  The club would like to thank all those who supported the draw and thanks to O’Toole’s for the use of their premises and for their help and cooperation.  The following matched three numbers and received €35 each. Alan Harte, Lilabeth Donegan, Declan Nolan, Nora Hickey, Caroline Glynn, Mary Daly

The Rhode GAA Lotto is the main source of income the club has and now you can play online through our website.  The good news is when you play the lotto online you are entitled to free draws, for example, pay for seven draws, receive the eighth one free, pay for fourteen draws receive two free and so on.  In other words, the more you play the more free draws you are entitled to!!

May George & Joe Rest In Peace.

Minor: Our Minors were beaten in the quarter final by Ferbane on Friday night. Despite a gallant St. Vincents performance, Ferbane were superior on the night and played a fine brand of football. The team did very well making it to this stage of the competition defeating Tullamore and Clara en route. A big thanks to Jamie Hayes and Conan Curley for their efforts – on this the final year of the Minor competition.

Under 8s: Last Saturday our u8s had the pleasure of playing in a blitz at the flash new Faithful Fields complex near Kilcormac. The lads perfomed well, and had two competitive games against Clara and Tullamore - and the skills continue to develop nicely.

Under 6s: The Under 6s finished their season last week with an outing to Supermacs. Alot of fun was had by all throughout the season, and some enjoyable matches were played against local clubs over the last couple of months. Many thanks to the mentors Niall Farrelly, Damian Longworth, Aishling Jones, David Walsh, Adrian Delaney, Matt Colgan, and Jake Naughton- alot of tedious development work begins at this stage.

To have the news from your local GAA Club included simply e-mail them to news@offalyexpress.ie each week