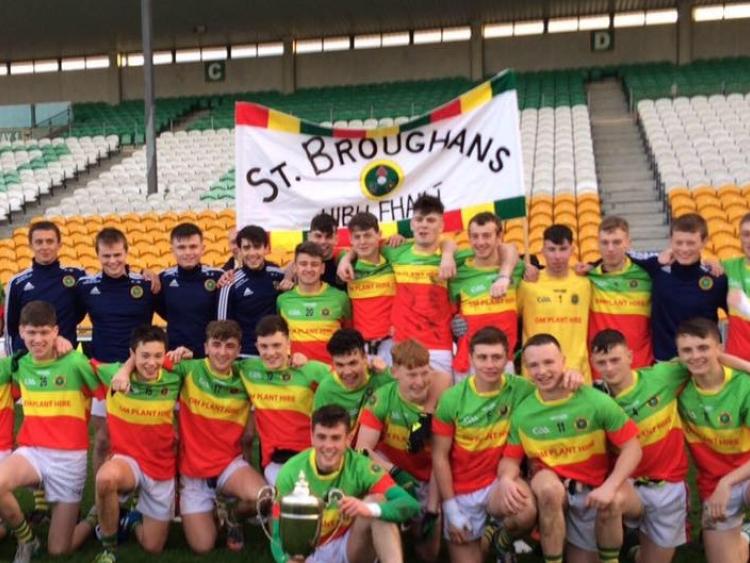 Third time was the charm for St Broughan’s as they were crowned Tullamore Court Hotel Minor A Football champions for the first time on Saturday.

After three epic games, they eventually saw off the determined challenge of Ferbane/Belmont in O'Connor Park
There was nothing to chose between them in the opening exchanges. James Dunne and Cian O'Neill put St Broughan's into an early lead but Sean Flynn and Jack Darcy brought Ferbane/Belmont level.

The sides continued to exchange points before St Broughan's began to pull away before the break with Shane O'Brien kicking the point that left them 0-6 to 0-4 ahead at the break.

As you might expect between two such evenly matched sides, Ferbane/Belmont responded after the break with two points from Cian Johnson drawing them level within five minutes of the restart.

After Shane O'Brien and Jack Darcy exchanged points, the score stood at 0-7 apiece after 42 minutes and again the game looked as if it would go to the wire for a third time.

However, in the closing quarter, St Broughan's got the upper hand began to pull away. In the next ten minutes, they scored five points without reply to finally put daylight between the sides.

Ronan McGuire pulled one back for Ferbane/Belmont but, with the line in sight, St Broughan's were not to be denied and and points from Shane O'Brien and Oisin Murphy saw them over the line.

It took more than 200 epic minutes to separate the sides but eventually St Broughan's made history by claiming their first Minor A Football title.