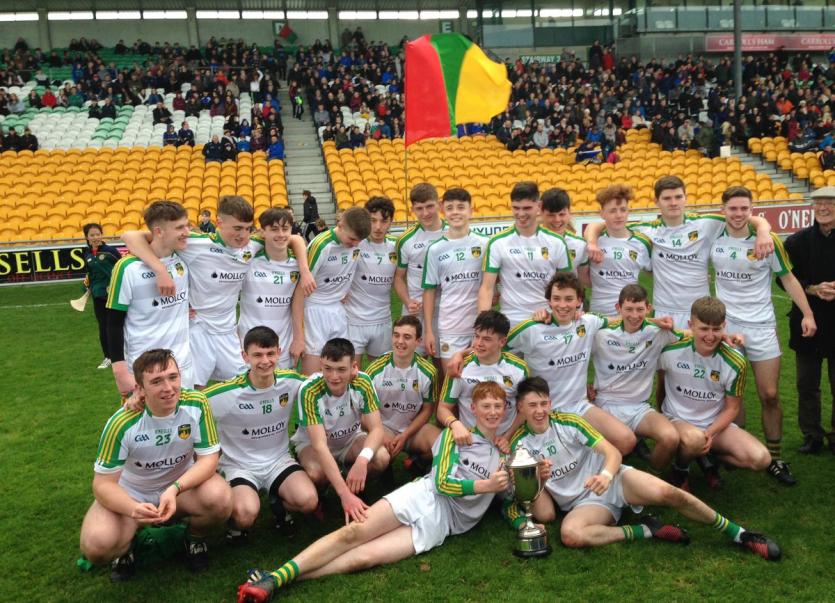 Ballinamere/Durrow minors made their own piece of history on Sunday in O'Connor Park as they claimed a first ever Minor A Hurling title for the club.

After an exciting hour of hurling, they had one point to spare over Kilcormac/Killoughey coming out on top by 1-13 to 0-15. With just two minutes to go, they trailed by a point but crucially, they hit the last two points of the game to edge out Kilcormac/Killoughey when the final whistle went.

Ballinamere/Durrow were quickly into the game scoring the first two points but Kilcormac/Killoughey were quick to respond and the sides were level with just three minutes elapsed with Cathal Kiely and Karl Guinan on target. That set the pattern for much of the first-half as the sides were very evenly matched and were still locked at 0-6 apiece after 20 minutes.

Kilcormac-Killoughey edged in front through Conor Quinn but Ballinamere/Durrow went to the break in front by 1-6 to 0-7 when John Murphy finished the ball to the back of the net.

Points from Sean Duignan and Brian Duignan extended that lead to four on the restart but Kilcormac-Killoughey gradually clawed their way back and midway through the half, a point from Cathal Kiely got them back within one at 1-9 to 0-11.

Brian Duignan edged Ballinamere/Durrow two points clear but Kilcormac-Killoughey hit the next three points to lead by the narrowest of margins, 0-14 to 1-10 entering the final five minutes.

The sides exchanged a point apiece to leave Kilcormac-Killoughey one ahead with two minutes to go but there was still a grandstand finish ahead as Ballinamere/Durrow hit the last two points to edge in front when it mattered the most to claim their first ever Minor A Hurling title.