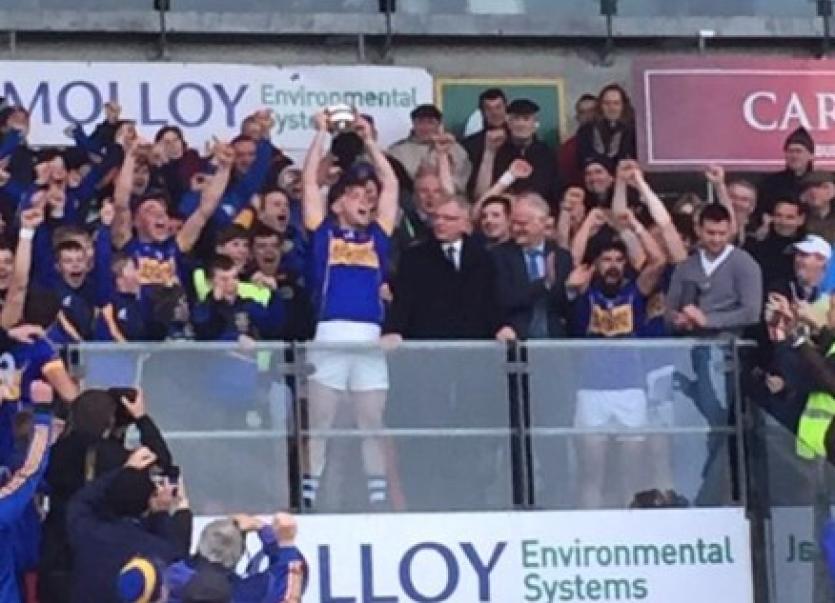 After suffering heartbreak in the last two Offaly Senior Hurling Finals, St Rynagh's put those disappointments firmly behind them as they reclaimed the Sean Robbins Cup on Sunday bringing to an end a 23 year drought.

There was little to chose between themselves and their great rivals Birr and entering the final stages, there was only a point between the sides. With the game on the line, it was a goal from Ronan Hughes that eventually settled this engrossing tie in front of over 6,500 supporters in O'Connor Park in Tullamore.

St Rynagh's had the better of the opening quarter and led by 0-4 to 0-1 at the end of the first quarter with Stephen Wynne, Stephen Quirke (2), and Ronan Hughes getting their scores.

Eoghan Cahill got Birr off the mark early and he added a second to reduce the gap to two after 16 minutes. St Rynagh's however were on the front foot and after another point from Quirke, Joey O'Connor struck for the opening goal of the game to leave six points between the sides.

The sides added another three points each before the break to leave St Rynagh's in a strong position with a 1-8 to 0-5 advantage.

That lead grew to eight shortly after the restart with two quick points but Birr were far from done and a goal from Colm Mulrooney got them back into the game.  Two points from Eoghan Cahill followed in quick succession and the gap was suddenly reduced to a far more managable three points.

Stephen Wynne and Ronan Hughes scored within a minute of each other for St Rynagh's to give them a bit more breathing space but Barry Whelehan and Emmet Nolan responded in kind as the scores at both ends began to flow more freely.

The sides continued to match each other score for score and entering the last five minutes, St Rynagh's still held the three point lead at 1-16 to 1-13.

Birr got back within two with Sean Ryan on target but that was as close as they got as the next score of the game was the one that settled the final in St Rynagh's favour.

Man of the Match Ronan Hughes was the right man in the right place at the right time as he capped an excellent individual display when he found the back of the net to put St Rynagh's 2-16 to 1-14 ahead.

Eoghan Cahill added one further point for Birr but they could not manage to get back on terms as St Rynagh's ended a losing streak in finals and in doing so ended a 23 wait to bring the Sean Robbins Cup back to the storied club.