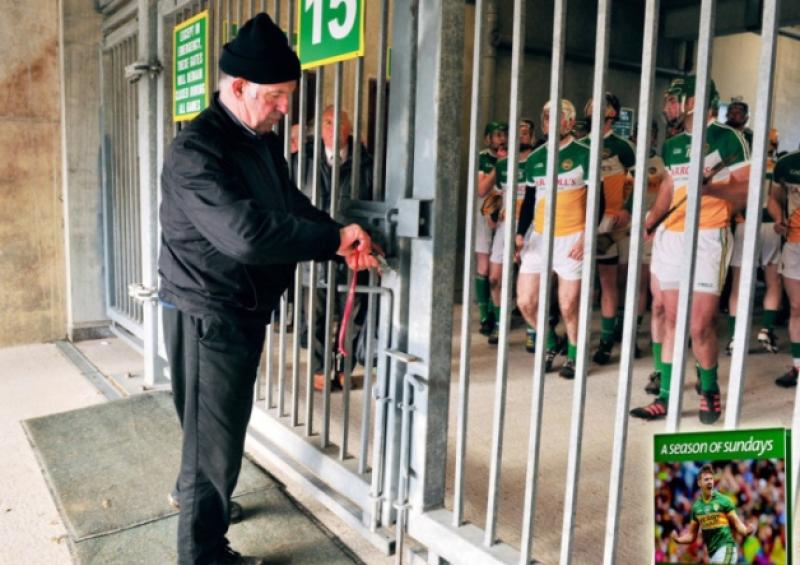 The Kingdom’s James O’Donoghue crowned off a great season by starring on the front cover of one of the year’s most eagerly anticipated GAA books, A Season of Sundays 2014, sponsored by Carroll’s.

The Kingdom’s James O’Donoghue crowned off a great season by starring on the front cover of one of the year’s most eagerly anticipated GAA books, A Season of Sundays 2014, sponsored by Carroll’s.

Celebrating its 18th year of publication, Sportsfile launched the 2014 edition in the Croke Park Hotel in front of a host of players and members of the GAA including Ard Stiúrthóir, Páraic Duffy.

Once again, Ireland’s number one Sports Photography Agency, Sportsfile, has produced another magnificent collection of images that illustrates the highs and lows of the 2014 GAA All-Ireland season. For the past 18 years, Ray McManus and his team of award-winning photographers have captured the special moments that make each year’s A Season of Sundays a memorable keepsake and a GAA tradition in its own right.

The book is enhanced by the Head of Media Relations for the GAA, Alan Milton’s perceptive caption-writing. It would make the perfect Christmas gift for any GAA enthusiast, retailing at €24.95 from bookstores nationwide and online at www.sportsfile.com.

This year’s book portrays the magical and thrilling moments that helped define the 2014 GAA season from start to finish. The much coveted front cover image this year sees ‘player of the year’, James O’Donoghue, celebrate his outstanding performance against Cork in the Munster semi-final, after landing 10 points, eight from play in arguably one of the best ever attacking performances in a provincial final. The coffee-table collection of images also depicts the tactical master class from Donegal as they stunned All-Ireland champions Dublin with a six point win. The book also captures the key moments of the GAA Hurling Championships, which for the third consecutive year ended in a draw, with Kilkenny eventually overcoming Tipperrary to take home their 35th senior title.

The book’s creator, Ray McManus from Sportsfile commented; “I am proud to launch our 18th year of A Season of Sundays. Each GAA season is completely unique and this year has seen plenty of new talent emerge and new storylines unfold throughout the Championship. The team at Sportsfile have done another great job in telling these stories through the lens.”

Ard Stiúrthóir Chumann Lúthchleas Gael, Páraic Duffy added; “Year in, year out Ray McManus and his team successfully capture the highs and lows of our season beginning in low-key fashion in winter and spring and continuing right up to a crescendo in late summer and autumn. Few works bring together in such style the highlights of a GAA season in one collection and this shines a light on the incredible coverage afforded to our games - at all levels - by Sportsfile. I wish Ray and his team every success with the book and look forward to many more editions.”

Karen Magee, Marketing Manager Carroll’s stated; “Once again Carroll’s is proud to sponsor A Season of Sundays – This year’s book eloquently portrays a collection of photographs which tell the story of yet another thrilling season of GAA. Carroll’s are the longest running sponsor of the GAA, and over 24 years have seen many gripping moments. No other publication displays a collection of images of such raw, undeterred pride and passion for the game. The exceptional talents of Ray and his team uniquely capture moments of soaring highs and desperate lows of the GAA season. We hope you enjoyed a Carroll’s ham sandwich on your way to the big matches this year and we are confident that 2015 will also be a season of success. We look forward to many more editions of A Season of Sundays yet to come.”

A Season of Sundays 2014, sponsored by Carroll’s, retails at €24.95 and is now available at bookstores nationwide and online at www.sportsfile.com.