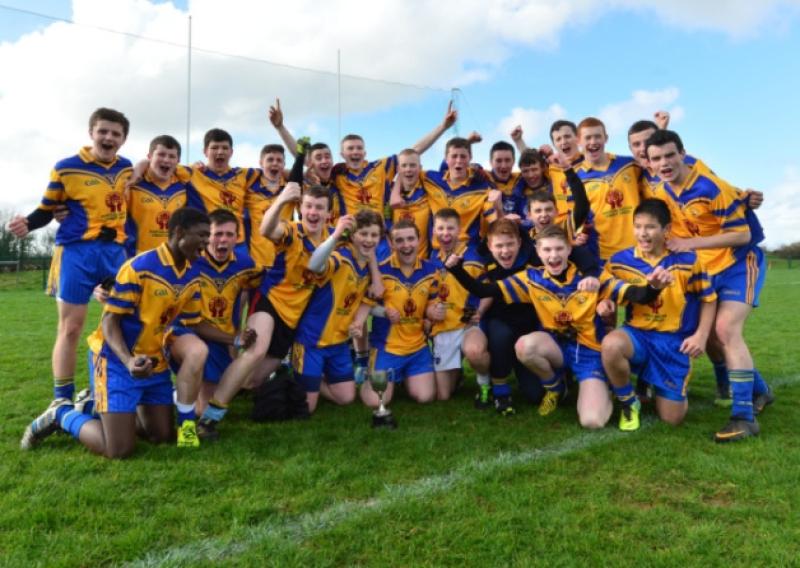 The Portarlington school had trailed for most of the game, but their persistence paid off in the last five minutes, as they managed to turn around a four point deficit to win by just one in the end.

In truth, if they had lost the game, they could have had few complaints. They were very wasteful in attack, and it looked like that was going to be their undoing as the minutes ticked away.

While the attack misfired, their defence played superbly, and in the last 15 minutes of the game they upped their intensity in the tackle. That ultimately set the scene for the win, but they almost left it too late.

They were well served on the day by a number of players, but full-forward Jack Walsh was crucial to their late recovery. The Gracefield man moved further out the field as the game went on, and he won some crucial possession in midfield that helped to set in motion some of their late scores.

In the early stages, it was all so different for Colaiste Íosagáin, as they could barely get out of their own half. Kilcock switched into ‘attack’ mode from the throw in, and they had a couple of sighters at goal before midfielder Jason Gibbons opened the scoring in the third minute.

With wind advantage, Kilcock were pouting forward at every opportunity, and centre-forward Cian Duke quickly added a brace of points, one from a free, to push the three ahead.

Íosagáin didn’t manage a shot at goal until the seventh minute, but Colm Murphy’s effort tailed off and Kilcock were quickly on the attack once again. Gibbons added his second of the game before Shane Nerney was penalised for handling the ball on the ground, and Duke calmly floated over the resulting free to open a five point gap between the sides.

Íosagáin finally opened their account in the 12th minute, and they did so in somewhat dramatic fashion. Midfielder John Cahill was set up 14 yards out, and his rasping drive cannoned off the crossbar and rebounded to his midfield partner Sean Byrne, who then popped it over the bar.

Jake Foster added a free moments later as Port settled into the game, but ‘keeper Ross McGrath had to produce a point-blank save to deny Rory O’Brien seconds later. Port’s response to that scare was to take the lead themselves, as Jack Walsh set Johnny Kelly clear on goal and he finished low past Ethan Devine.

Liam Hogan pointed three minutes later to push Íosagáin one ahead, but Kilcock hit back with a goal of their own through Conor Frayne to re-take the lead.

Port could have had a couple of goals before the break, but Jamie Connolly hit the crossbar and Johnny Kelly’s shot was deflected wide of the goal.

That left Kilcock two up at the break, but Íosagáin had wind advantage in the second half, and quickly halved the deficit with a point from Sean Byrne. That should have seen them push on, but some wasteful shooting meant they would not score again for over 15 minutes.

In that time, Kilcock appeared to have built up an insurmountable lead. Points from Brian O’Reilly and Danny Coss Hennegan preceded a well-taken goal by Cian Duke as Kilcock lead by six.

Íosagáin showed signs of life by rattling off three points in a row, with Jack Walsh getting two from frees, to leave a goal in it. Kilcock responded with a point from Jason Gibbons, and that put them four ahead with five minutes to go.

All looked to be lost for Íosagáin at that stage, but a free from Colm Murphy set up a dramatic finale. Walsh and Murphy then set up Jake Foster for a goal that levelled the scoring, and then Walsh tapped over what would be the winning point from a free.

Kilcock tried to find an equalizer, but Íosagáin had done just about enough to claim the win.