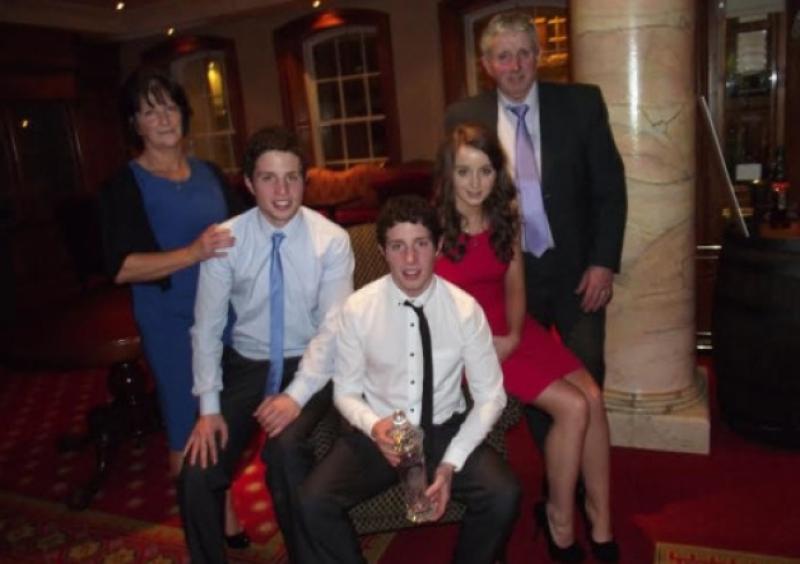 This week’s notes for Rhode GAA Club. E-mail your notes to damian@offalyexpress.ie.

This week’s notes for Rhode GAA Club. E-mail your notes to damian@offalyexpress.ie.

The Offaly GAA Awards night took place on Saturday night in the Bridge House who sponsored the event and it again was a great occasion with a huge crowd attending. All the award winners got a great reception by the excellent M.C Michael Duignan. There was a standing ovation for both the hall of fame award winners Paudge Mulhare and Mike Ryan. Rhode’s Paul McPadden (pictured above with his family) won the Under 21 award a great achievement for a very committed player to add to his Minor award he received three years ago. All at the club congratulations Paul on his achievement.

Offaly Senior footballers were beaten by Laois in Portlaoise on Wednesday evening last and after a good competitive game Offaly were eaten by six points 2-18 to 1-15. On the team and panel from the club were Conor McNamee who made his senior inter county debut and well done to Conor for that, Niall Darby, Niall McNamee and Pauric Sullivan. Offaly Senior footballers played their third game in a week in the O’Byrne Cup when on Sunday they were beaten by Wexford in O’Connor Park on a 0-16 to 0-13 score line. This ended their O’Byrne Cup competition, UCD qualified out of Offaly’s group for the semi-final they will play Kildare.

Offaly Senior hurlers played their first competitive game of the season on Saturday they had a 1-16 to 0-14 win over Antrim in the Walsh Cup. It also marked the first game in charge of the team for Brian Whelhan Manager Ger Coughlan and John Troy selectors.

Offaly Under 21 footballers gained their first points in this year’s Hasting Cup when they had a 1-11 to 2-7 win over Longford in Conbullogue on Saturday. On the team from Rhode was Conor McNamee.

Sympathy is extended to the Leavey family of Croghan on the death of Dora Carthy (Nee Leavey) whose remains were interred to Croghan on Friday. May she Rest in Peace.

Membership of the club is now due and can be paid to any of the club officials who are as follows Patricia McManus, Mary Hannon, Jody Kilmurray, James Murphy, Ger Noonan and John Glennon. Subscriptions are as follows

There was no winner of the Rhode GAA Lotto for the week ending 6th of January for a Jackpot of €15,000. The numbers drawn were 15 19 24 30. The club like to thank all those who supported the draw and thanks to O’Toole’s for the use of their premises and for their help and cooperation. The following matched three numbers and received €200

The Rhode GAA Lotto is the main source of income the club has and now you can play online though our website. The good news is when you play the lotto online you are entitled to free draws, for example pay for seven draws receive the eighth one free, pay for fourteen draws receive two free and so on. In other words, the more you play the more free draws you are entitled to!!

Rhode Ladies will be holding their AGM on Saturday January 11th at 7pm in the New Rhode GAA Hall, A full attendance is requested.