Killina goal blitz too much for Mountmellick 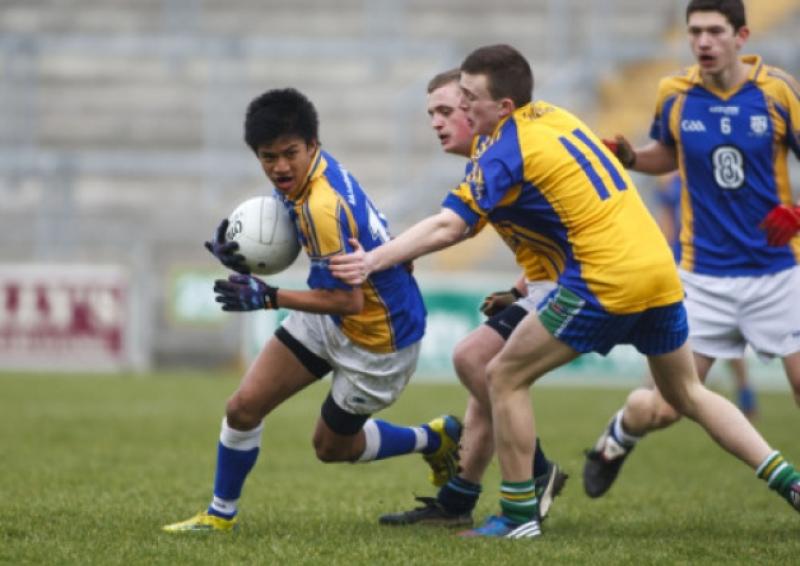 There were just three points in it at the break with the Offaly school holding the edge and the game was still very much in the balance. However Mountmellick only managed one point in the opening 20 minutes of the second-half while Killina found the net three more times to build an unassailable lead.

To their credit Mountmellick never let their heads go down and they battled on to the end kicking three quickfire points but it was too little too late to change the outcome of the game.

Mountmellick goalkeeper Ger Kelly could do little with the four goals as for three of them he was left isolated in near one on one situations. Killina were clinical in front of goals while at the other end the Mountmellick forwards seldom got a clear sight of Declan O’Hanlon’s goal.

Mountmellick made the perfect start to the game as they blasted out of the blocks to open an early three point lead. A long free from James Hilliard that bounced on the solid pitch and went over the bar opened the scoring and that score was followed in short order by points from Jason Caffrey and Jordan Williamson.

At his stage Mountmellick were keeping Killina pinned in their own half but the Offaly side gradually came back into the game and they got off the mark with a point from Shane Flanagan after six minutes.

A point from a free from Gio Russon reduced the arrears to one before Mike O’Brien struck for the first goal of the game after nine minutes when he was put through one on one on Ger Kelly after a defence splitting pass from Adam Keyes.

Aaron Dowling came close to pulling a goal back for Mountmellick but his shot was well saved by Declan O’Hanlon.

Two more points from frees from Russo put Killina four points ahead before Jordan Williamson ended a 20 minute scoring drought for Mountmellick to reduce the gap to three with a well taken free.

Killina came close to adding a second goal soon after but two goalbound shots were blocked with Dylan Langford making a superb clearance off the line.

With both sides struggling to add to the their totals, Killina went to the break 1-4 to 0-4 ahead and the game was still firmly in the balance however a second goal for the Offaly side firmly swung the momentum in their favour. The goal had a large slice of luck attached as the ball broke straight to the feet of Conor Flanagan but he did well to slot the ball under Ger Kelly.

A point from Jason Caffrey breifly gave Mountmellick hope but Killina struck back with two more goals to remove any doubt over the result. The first came on the break as Mountmellick were caught pushing forward when Killina centre-back Aaron Buckley made an interception. His long ball forward found Mike O’Brien in space and, after drawing the last defender, he squared the ball to Shane Flanagan who volleyed home from close range.

Mountmellick never stopped attacking but their passing from the back was costing them as they kept turning over possession and Killina were quick to take advantage of any opportunities.

The fourth goal again came from an interception an Gio Russo’s rasping shot almost found the back of the net but goalkeeper Ger Kelly appeared to get a fingertip to the ball to deflect it onto the crossbar. Unfortunately for the ‘keeper, Shane Flanagan was the quickest to react and the corner forward slotted home.

Mountmellick rang the changes late in the game and two of the subs who came on accounted for three points between them. The lively Adam Brennan was on target for two points while Eoghan Quigley rounded off the scoring for Mountmellick.

However while they picked off some nice points, Mountmellick couldn’t get a shot on goal largely due to the performance of the outstanding Killina full-back line with Cathal O’Brien particularly impressive at corner back. The final score of the game went to Killina with Gio Russo kicking over his fourth point to seal the win leaving Mountmellick wondering what might have been.