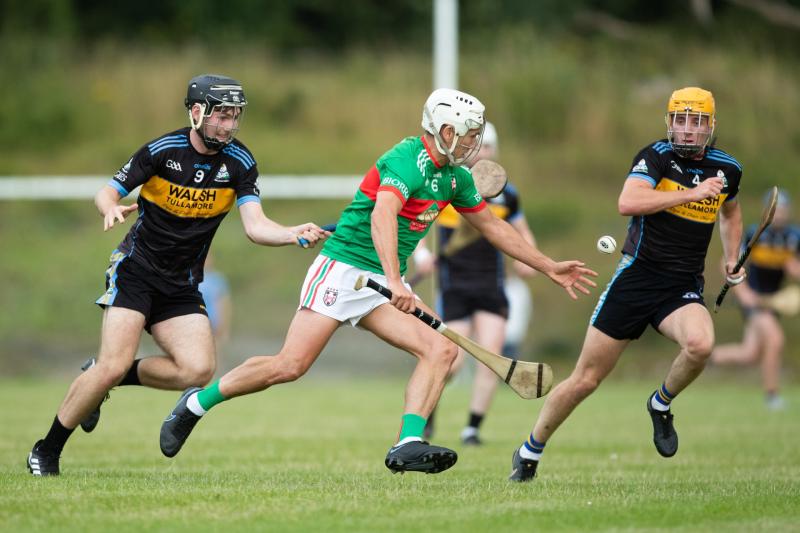 Barry Harding grabs the ball for Birr ahead of Clodiagh Gaels' Dylan Hyland.

THE Offaly Senior Hurling Championship sprang to life last weekend with a couple of hugely significant results – there were some very entertaining exciting games in round 4, though once again the quality on offer was not particularly high.

The big talking points were the demise of Coolderry, who are out of contention with a round remaining and Kinnitty performing heroics to draw with St Rynagh's on Sunday evening.

With one round of group games to go, five of the six teams that will compete in the knockout stages are known. Kilcormac-Killoughey, St Rynagh's, Belmont, Shinrone and Ballinamere are all safely through.

The top team in each group will go into the semi-finals and two decisive closing round clashes will determine these. The winners of Kilcormac-Killoughey and St Rynagh's will qualify out of group one with a draw enough for K-K. In group 2, the victors of Belmont and Shinrone will go through to the semi-finals with a draw putting Belmont on top.

The big interest in the closing round, however, will be on the clash between Birr and Kinnitty in group 2. This is a winner's take all tussle with the victors in the quarter-final while Kinnitty will get there if it is a draw – the losers will bow out.

While the Birr and Kinnitty clash was always going to be a shootout for a quarter-final place once Birr beat Clodiagh Gaels on Saturday evening, Kinnitty did their confidence the world of good with an excellent draw with the champions in Coolderry on Sunday.

With four rounds played, Kilcormac-Killoughey top group 1 with six points, St Rynagh's have five, Kinnitty 3, Birr 2 and Clodiagh Gaels 0. Belmont lead the way in group 2 on 6, followed by Shinrone and Ballinamere on 5, Coolderry and Seir Kieran on 0.

Ballinamere, however, are likely to stay in third place in group 2. They have completed their four games and their scoring difference is worse than Shinrone's - +2 compared to +9. The only way Ballinamere can get into runners-up spot is if Shinrone suffer a heavy defeat against Belmont and this is likely to be a very tight game. This means that Ballinamere will probably face a tough quarter-final against the losers of Kilcormac-Killoughey and St Rynagh;s.

Coolderry bowed out last Saturday when they suffered their third defeat at the hands of Shinrone. It hasn't happened for last year's beaten finalists this year and they looked to be heading to victory for much of the second half before Shinrone rallied late for a 1-16 to 1-15 win.

In the other group 2 game, Belmont also finished well to beat Ballinamere by 1-21 to 2-15 and put themselves in pole position for a semi-final.

Coolderry and Seir Kieran meet in the other group 2 game in the closing round. The loser of this will go into the relegation play off and a draw will keep Coolderry out of it as they have a better scoring difference.

In group 1, Kinnitty showed great courage and character in the second half to comeback and draw with St Rynagh's, 4-15 to 2-21. It was Kinnitty's biggest result in senior hurling in years and they very much deserved it on the day. St Rynagh's were not fully tuned in but at the moment, this result and performance must be treated as a blip rather than evidence of anything wrong while credit must be given to Kinnitty for the way they fought to the end.

Birr had an anticipated win over Clodiagh Gaels, 0-22 to 0-12 on Saturday. After losing their opening two games to St Rynagh's and Kilcormac-Killoughey, Birr's season will be dictated by their results against Clodiagh Gaels and Kinnitty. They are expected to win both those games and have one of them out of the way but they will be on high alert after Kinnitty's draw with St Rynagh's.

The final round of games takes place on the weekend of August 19-21 and all four games will be played on the one day at the same time. The relegation play off will be between Clodiagh Gaels and the losers of Coolderry and Seir Kieran.