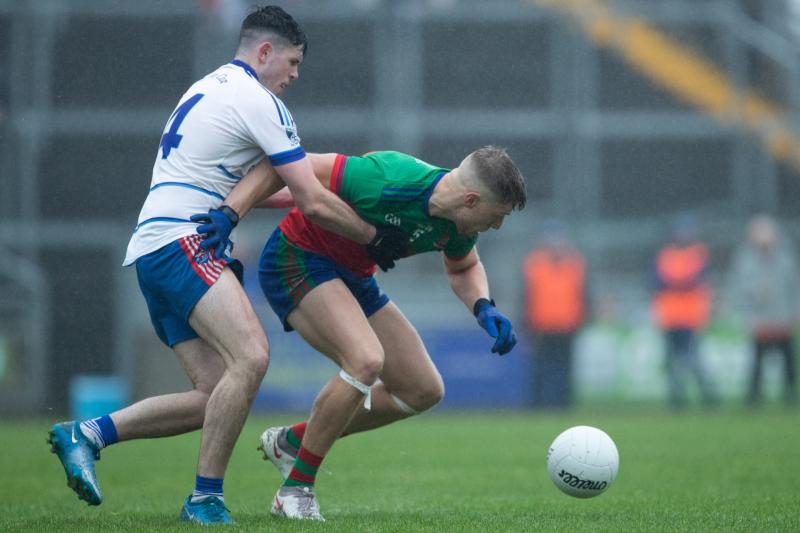 Padraig Cantwell and Sean Courtney tussle for possession in Shamrocks' win over Cappincur.

TULLAMORE and Rhode have emerged as the two outstanding contenders in the Tullamore Court Hotel Senior Football Championship.

While Edenderry and Ferbane have the potential to get into the mix, Tullamore and Rhode have been the best teams so far and they are on collision course for another clash in the final.

Champions Tullamore have already secured a semi-final spot with a round to go and with Rhode playing Clara in their final group game, it will be a big shock if they don't join them there – the two group winners will be in opposing semi-finals, paving the way for a possible rematch between Tullamore and Rhode in the final.

Tullamore defeated Rhode in a replayed decider last year and once again those two sides look to be out ahead of everyone else.

The second round of group games took place last weekend and the likely qualifiers for the knockout stages has emerged, although there is the potential for a change in the final round.

Tullamore remain the title favourites. A win over Ferbane on Sunday evening put them on four points and they are assured of top spot and a semi-final place – Shamrocks could also get onto four points and tie with Tullamore but the champions will go through under the head to head rule.

In any event, that is unlikely to happen as Tullamore will be favourites to beat Cappincur in their final group game.

Rhode are also in very good form and they secured their quarter-final place with a 1-14 to 1-9 win over Durrow in group 2 on Friday evening. A draw with Clara in their final group game will secure top spot and a semi-final place.

In group 1, Shamrocks had a crucial win over Cappincur on Saturday evening. They had a dreadful first half, trailing by 0-6 to 0-2 at half time but got the finger out in the second half to win by 2-10 to 1-8. Cappincur had drawn with Ferbane in their first game and were very close to getting an equalising goal against Shamrocks before conceding a couple of late points.

It puts Shamrocks in pole position to claim a quarter-final place, though it could go wrong for them – if they lose to Ferbane and Cappincur shock Tullamore, they would be out. A Shamrocks defeat to Ferbane is probable but a Cappincur win over Tullamore is unlikely, even though they have beaten them before.

Tullamore's form is noteworthy considering the absence of some of their best young talent, John Furlong, Oisin Keenan-Martin and Cormac Egan. Egan, however, could come back into the equation by the semi-final stage and will be able to do more training in the coming weeks as he recovers from a hamstring injury. Furlong and Keenan-Martin won't play this year. Luke Egan missed Sunday's game against Ferbane, where Tullamore came through a teak tough encounter to win by 1-9 to 1-7, with a flake fracture on a leg. That injury, however, is nowhere near as serious as a full break and the talented forward is likely to be back within a month, meaning he will be available for the semi-final. Ciaran Egan got sent off late on in Tullamore's win over Ferbane for something he said to referee Chris Dwyer and will miss the Cappincur game unless he gets the red card rescinded.

Ferbane are also on tricky ground. They have just a point from their two games and are searching desperately for their best form. They were really highly motivated on Sunday evening, hit Tullamore with everything they had but just couldn't break down the winners' defence as they kicked a lot of chances away. It looks like they will get through – they will be favourites to beat Shamrocks and even if they lose, they should be okay once Cappincur lose to Tullamore. Ferbane have a better scoring difference than Cappincur, -2 compared to -5 and are likely to stay ahead on scoring difference in the final round.

In group 2, Edenderry and Clara are both on two points while Durrow have none. Edenderry had an easy 0-15 to 1-6 win over Clara, who gave a very poor performance on Friday evening. However, Clara may have done enough to scrape into the quarter-finals. They beat a vastly understrength Durrow in the first round and this was the key result of their season. It is almost impossible to envisage Clara beating Rhode but Durrow need to beat Edenderry in round 3 to have a chance. Durrow will have an outside chance here and a win for them can't be ruled out but Edenderry are motoring reasonably well and will be favourites.

If Durrow did beat Edenderry, them Edenderry and Clara (assuming Clara lose to Rhode) will be tied on two points each. In this scenario, scoring difference will determine who goes through and Clara would almost certainly lose out – at the moment Edenderry's scoring difference is +5 points, Clara's is -5 and Durrow's is -6.

The games in each group will be played at the same time and day in the closing round and if results go as anticipated, you will have Tullamore and Rhode in the semi-finals and quarter-final pairings of: Ferbane v Clara and Edenderry v Shamrocks. 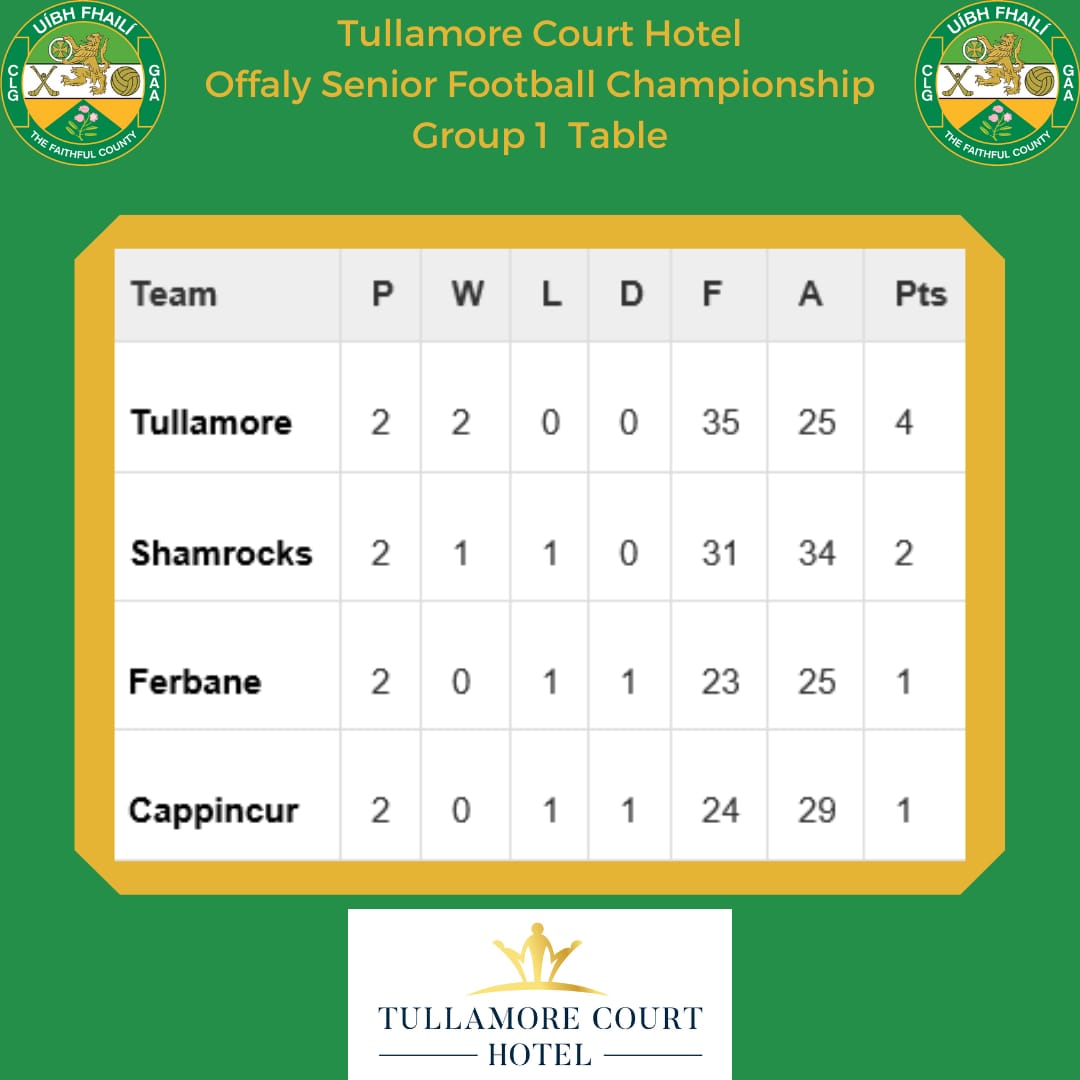 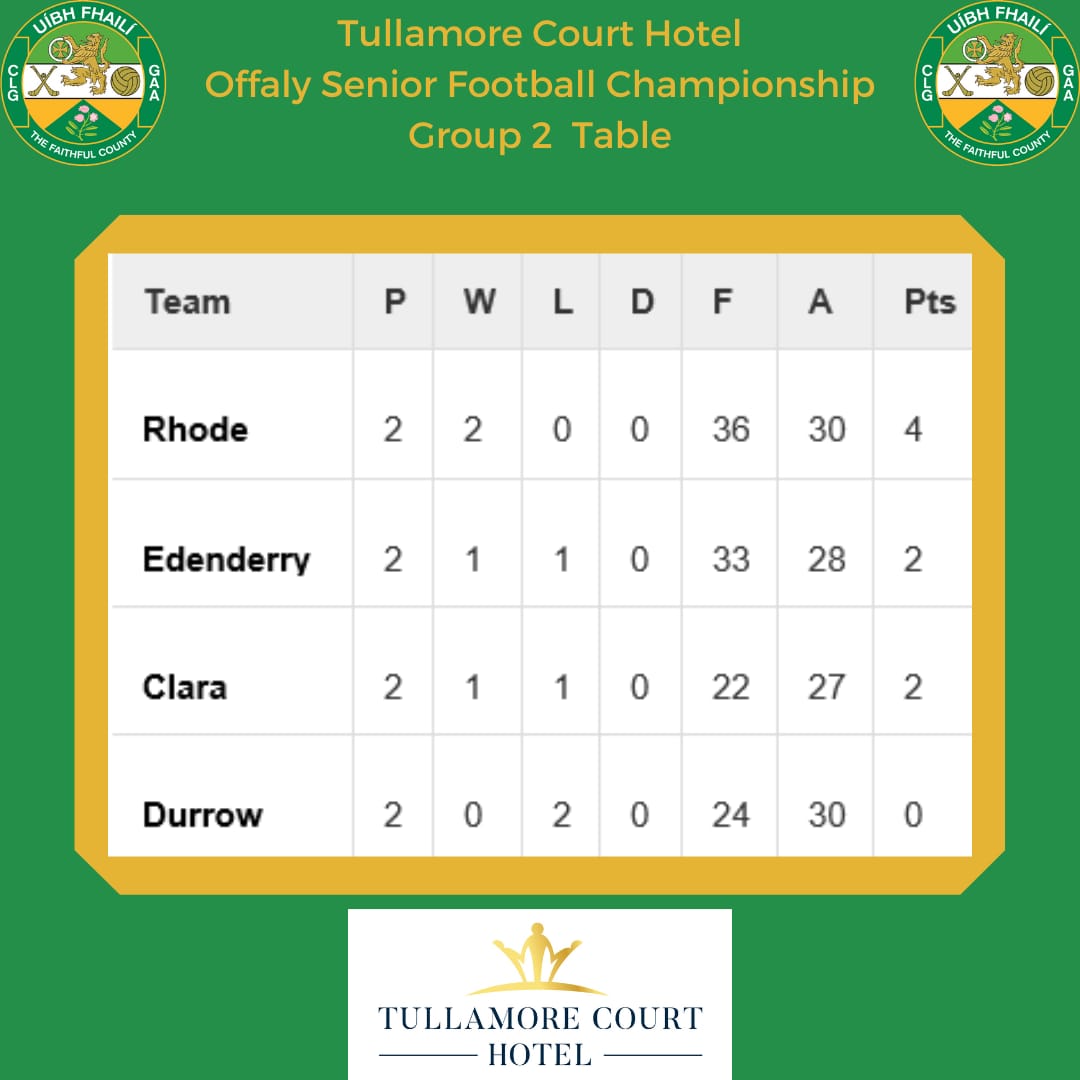