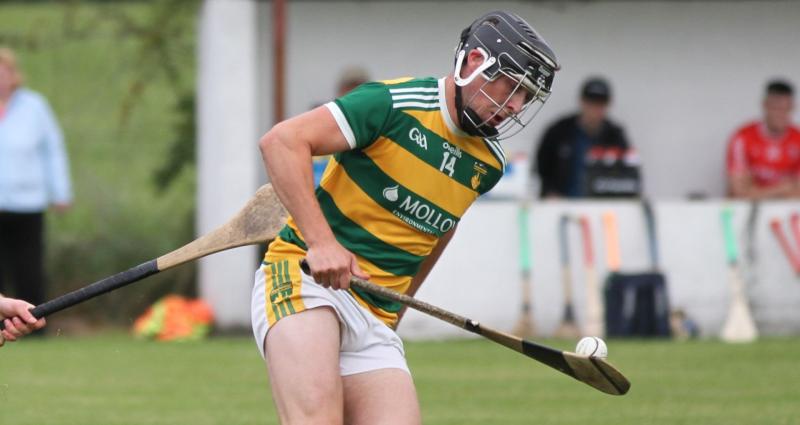 Joe Maher and Ballinamere have made the quarter-finals.

THE Offaly Senior Hurling Championship began to take shape when the third round of games took place last weekend.

With two rounds to go, there may be twists and turns before the final line up for the knockout stages are determined but a couple of things were set in stone at the weekend.

Both Kilcormac-Killoughey and Ballinamere have qualified for the knockout stages while Clodiagh Gaels and Seir Kieran are out of contention and look like clashing in the relegation play off.

Apart from that, everything else is up for grants but we can predict with a fair degree of certainty that champions St Rynagh's will also make the knockout stages.

The big news last weekend was a second successive defeat for Coolderry. Offaly's most successful side, at county club level and so close to winning another title when losing last year's final to St Rynagh's, they are now staring an early exit in the face.

The game is not up for Coolderry yet. They have two games left and could scrape through in group 2 but the ice is cracking under their feet and their fate is not in their own hands.

Coolderry fought with every inch of their fibre against Ballinamere before losing by 0-26 to 2-18 in an absolutely gripping contest in Birr. It was a mighty game of hurling with Coolderry bringing it right down to the wire before Ballinamere just squeezed home for a deserved win.

It was a huge result for Ballinamere. They have some of the best hurlers in Offaly, a handful of county players but they had a disappointing 2021. They desperately needed to take a big scalp, to beat one of the contenders and this was their biggest result since they returned to senior hurling a few years ago.

It also secured a quarter-final place for them and a win in their last game against Belmont will put them into the semi-finals. That would be a massive, imporant step forward for Ballinamere and while they don't look to be quite strong enough overall to win a championship, they will be aiming high and are very much moving in the right direction.

Shinrone, beaten by Coolderry in the semi-final last year, kept their ambitions on track with a 2-19 to 1-14 win over Seir Kieran in Birr on Saturday evening. The result was all that mattered for Shinrone here and the quality of performance was of secondary concern. That was fortunate for them as it was a somewhat unconvincing, subdued, fragmented display. Shinrone produced flashes of good hurling but were pushed much harder by Seir Kieran than the final score suggests. Shinrone keeper Eamonn Cleary made some fine saves and Seir Kieran had ample chances to have been very close, if not to have won this one.

Round 4 on the weekend of August 5-7 will determine a lot in this group. Belmont meet Ballinamere while Shinrone take on Coolderry. A Ballinamere win will put them into the semi-final while a point will secure a quarter-final for Belmont. Coolderrry simply have to beat Shinrone in the other game. Anything else, and it is curtains.

In round five a fortnight later, Shinrone meet Belmont and Coolderry play Seir Kieran. The round 4 results will determine exactly what is at stake here but Coolderry could do with Ballinamere beating Belmont and if they beat Shinrone, they could yet escape. However, if Belmont and Shinrone get to five points, and this is possible, then they are gone. Scoring difference could come into play – Belmont are on +5 points, Shinrone +8 and Coolderry -6. That further loads the dice against Coolderry but with Seir Kieran up last, this is retrievable.

It means that the closing two rounds will make for fascinating viewing – if Coolderry lose to Shinrone in the next round, the last one will be a dead rubber in terms of which three will go through.

Group 1 is going on much more predictable lines. Kilcormac-Killoughey are through the gap with six points from three games, St Rynagh's have four from two, Kinnitty two from two, Birr none from two and Clodiagh Gaels none from three.

Kilcormac-Killoughey sealed their quarter-final place with an expected win over Kinnitty last weekend, 0-26 to 1-17. While the jury remains out on Kilcormac-Killoughey and it is difficult to know if they have the other gear that they will have to find to win the championship, they were never in danger of losing here. They played well at times and are exactly where they want to be – they welcomed back the Geraghty twins, Peter and Thomas for this one with both coming on in the second half and they have the capacity to improve.

St Rynagh's were pushed hard by Clodiagh Gaels in the other one but eventually pulled away for the win, 0-17 to 0-10. St Rynagh's play Kinnitty in round 4 and it will be a huge shock if they don't secure their quarter-final place here. They play Kilcormac-Killoughey in round 5 and this is likely to be a shootout for a semi-final place with the losers in the quarter-final.

Birr are favourites to claim the other quarter-final spot. They play Clodiagh Gaels and Kinnitty in their last two games and two wins will probably put them through – the goalposts would be changed if Kinnitty shocked St Rynagh's. There are questions about Birr and they have a lot of improving to do but they are on course for a quarter-final.

Round 4 will determine a lot more but at the moment St Rynagh's are the clear championship favourites. Kilcormac-Killoughey have emerged as their main contenders, though Coolderry could get very strong if they survive while Ballinamere will be dreaming of a big breakthrough.