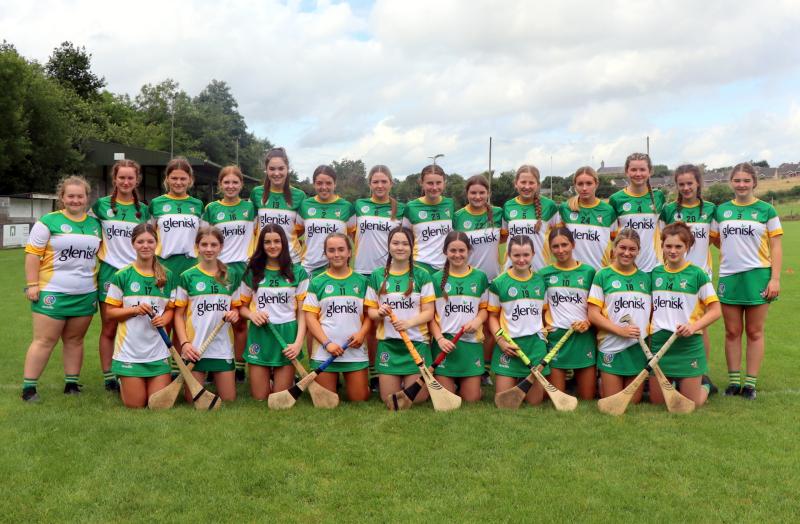 The Offaly team that played in Sunday's Under 16B All Ireland Semi Final against Antrim. (Photo by John Gavin).

OFFALY'S dreams of claiming an Under 16B All Ireland came to an end at the hands of Antrim on Sunday afternoon in Collon in Louth.  A late rally from Offaly gave them and their supporters hope that they might be able to pull off an incredible come back but Antrim had enough to keep the Faithful girls at arm's length and earn themselves a place in the All Ireland Final.

Tesco Ireland Under 16B All Ireland Semi Final

Antrim got off to a dream start hitting five points in the opening four minutes and then as if that was not enough, with five minutes on the clock, full forward Janey McIntosh got her first goal of the day.  Offaly opened their account in the eleventh minute when Birr's Roisin Kinsella tapped over a free and Niamh Sheehy added to it almost immediately with another point.

But if Offaly thought they were starting to get any sort of foothold in the game it was clinically dashed as Janey McIntosh hit her second goal of the day.  The Faithful girls registered a further 3 points before half time courtesy of another Kinsella free and Aoife Byrne and Fianait Dooley scoring from play to leave the half time score reading 2-6 to 0-5.  As the Offaly girls gathered for their half time talk, their coaches no doubt will have told their team that despite Antrim's first half dominance, the game was still within their grasp.

For Offaly to have any chance of reeling Antrim in they would have needed a good start when play resumed but it was the Saffron girls that had the upper hand.  A brace of points sandwiched a Roisin Kinsella free before a high ball in from Antrim's McIntosh nestled in the back of the Offaly net to complete her hat trick of goals and leave her side leading comfortably.

The teams exchanged points before the game exploded into life.  With the clock running down Roisin Kinsella fired the ball past Eimear McGivern in the Antrim goals.  Two minutes later and Fianait Dooley gave Offaly real hope when she added another goal.  The Offaly supporters in attendance now found their voice and roared their team to push on but credit to Antrim, they steadied the ship and replied with a goal of their own when Orla McAllister found the net to kill off any chance of an Offaly come back.

With the match now in injury time Offaly were awarded a penalty which Roisin Kinsella converted but it was academic at this stage as Antrim had the final say with a point from their star of the day, Janey McIntosh.

Antrim will now progress to the All Ireland Final where they will take on Laois who over came Carlow in the other semi final.