Champions begin in style with emphatic victory over Birr 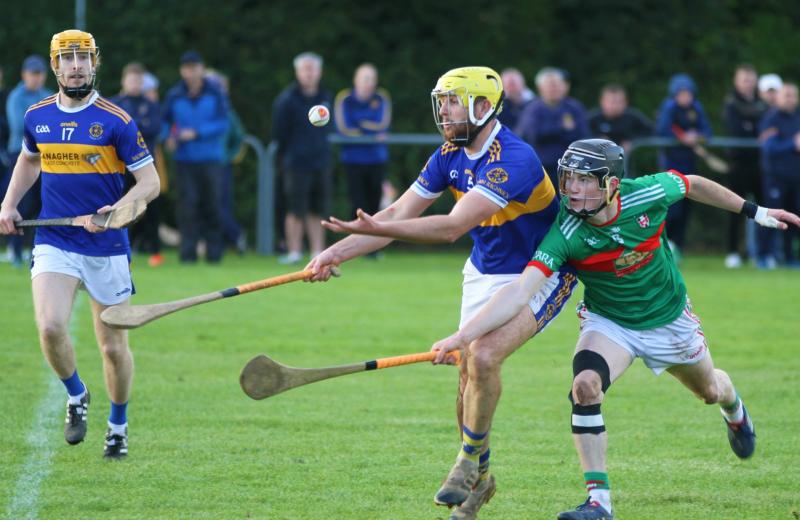 ST RYNAGH'S served notice that they won't be giving up their Offaly senior hurling title lightly when they scored an emphatic 11 point victory over Birr at Rath on Friday evening.

The champions displayed all their credentials as they dismantled a very disappointing Birr side, who didn't score their first point from play until the game was in injury time at the end of the game.

After an even opening quarter, St Rynagh's began to pull ahead and were five points up approaching half time but a goal and a point at the end of the half lifted Birr and they only went in at the break one point down, 0-12 to 1-8.

Any hopes that those scores might have inspired Birr to better things in the second half were quickly dispelled as Rynagh's hit the first three points of the half. The gap was five points entering the final quarter but Rynagh's just motored away from there leaving Birr well in their wake and by the final whistle the gap was 11 points.

St Rynagh's looked the slicker team in the first half and they put together some good moves to pick off their points, many from out the field. Seven different players contributed to their 12 first half points and by the end 10 different players had scored from play, including four of the six starting backs.

In contrast Birr had just a single scorer in the first half with Eoghan Cahill contributing all of their 1-8, the eight points all coming from frees. Birr's first score from play didn't come until the stroke of 30 minutes when Cahill got on the end of a move to fire home a goal and get Birr back into the game but they failed to build on that in the second half. He scored all bar one of their scores, the second Birr goal coming from Campbell Boyd as the Birr forward line failed to function.

St Rynagh's started with Ben Conneely in an unfamiliar centre half forward position and while he might not have featured prominently in the first half, his side were moving well and their link up play was good as they built from the back to pick off some good scores. He got more involved in the game when switched back to midfield in the middle of the second half.

Birr were going a little more direct, firing long balls into the corner but their forwards were getting very little change from the Rynagh's defence, who always seemed to have an extra man to pick up the loose breaks.

This was St Rynagh's first game as they had a bye in the opening round and on this performance they will be very much on contention to retain their title. They were on top in all areas of the field with Conor Hernon, Matthew Maloney and Pat Camon excelling in defence, Joey O'Connor very effective in the middle of the field and Aidan Treacy, Gary Conneely and Gary Kelly impressing in attack.

It was a sobering evening for Birr and they will have to go back to the drawing board before their remaining games. This was their second defeat after an opening round loss to Kilcormac/Killoughey and they will now be under pressure to defeat both Kinnitty and Clodiagh Gaels if they are to make the quarter finals. Oisin Murphy, Barry Harding, Campbell Boyd, Brian Watkins, Rory Carty and Eoghan Cahill were best for a disappointing Birr side.

Eoghan Cahill pointed two frees inside the first three minutes but St Rynagh's hit back and two Gary Connelly points sandwiched an Aidan Treacy '65'. Two more Eoghan Cahill frees from well inside his own half restored Birr's lead but points from Stephen Wynne and Pat Camon had St Rynagh's 0-5 to 0-4 up midway through the half.

Two Aidan Treacy frees stretched their advantage and after Eoghan Cahill replied with a free Ronan Hughes and Aaron Kenny (free) were on target to push Rynagh's four clear. Birr halved the lead with two frees in quick succession from Eoghan Cahill but St Rynagh's were moving well and Pat Camon, Matthew Maloney and another Aaron Kenny free had them five points up after 29 minutes.

Then Birr hit back and Campbell Boyd's high ball was won by Eoin Hayes, who transferred to Eoghan Cahill and he shot low to the net. He added a further point from a free and Birr went in only a point behind, 0-12 to 1-8.

Full back Conor Hernon got the first point of the second half for St Rynagh's and Aidan Treacy added two more, one a free. Eoghan Cahill pointed a Birr free after seven minutes, their only score in the opening 19 minutes of the half. Ronan Hughes, Aaron Kenny, Ben Conneely and two Aidan Treacy frees stretched the Rynagh's lead in the meantime.

An Eoghan Cahill free was a brief interruption in their scoring as Aidan Treacy ('65'), Stephen Quirke, Treacy from play and Aaron Kenny (free) pushed the lead out to 11 points. Then Birr attempted a quick line ball but Stephen Quirke intercepted, offloaded to Ronan Hughes an he made ground and finished to the net.

Birr did reply almost immediately when Campbell Boyd raced through and shot low to the net. Pat Camon fired over another long range point for Rynagh's before Birr got their first point from play as the game went into injury time when Eoghan Cahill pointed.

This was a great team performance by St Rynagh's with good displays all over the field. In the end the nod goes to Pat Camon who had a fine game at centre half back. He marshalled the defence very well and also managed to get forward to shoot three points from play.

Pat Camon's first point midway through the first half epitomised Rynagh's display. The ball was played cleverly through the backline until Camon was picked out in space in the middle of the field and he fired the ball over the bar from distance.

Kieran Dooley did a very good job throughout. He was firm and assured in his decision making and was in command of the game at all times and there was very little quibble with his performance.

St Rynagh's had a bye in the first round as the other sides in the group got their campaigns up and running and there was some anticipation to see how they would fare in a testing game. They left no one in any doubt that they were very much up for the game and any side who hopes to prise the Sean Robbins Cup way from them will have to be at the top of their game. After running Kilcormac/Killoughey to a point in their first game Birr came into the game with strong hopes but they were firmly extinguished by St Rynagh's who will now be even stronger favourites to retain their crown.

On a lovely Summer's evening, the Rath pitch looked in great condition and contributed to a lively game. As always parking was well organised and the Drumcullen club looked after all arrangements perfectly.