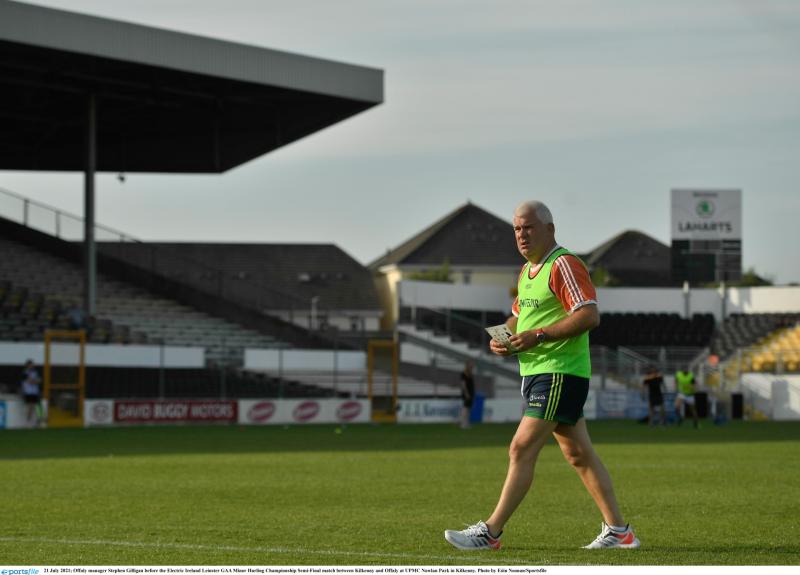 “IT IS a very hard, bitter pill to swallow today, especially being so close,” were the thoughts of Offaly manager Leo O'Connor in the immediate aftermath of Offaly's one point defeat to Tipperary in the All-Ireland minor final at Nowlan Park on Sunday.

As devastated players returned to the stony silence of the shell shocked dressing room after defeat had been so cruelly snatched from them in the dying seconds, the manager was keen to highlight what they had achieved throughout the year.

“The most important thingis the way these lads have performed all year for Offaly,” he said. “There's no negatives, it's all positive. We have just got to look forward and drive on. That's just the way it goes in hurling, in life and it can be so cruel at times. There are no words to describe what the lads have done.”

He said he was in a similar position in 1994 with Limerick when Offaly came from five points down to win. “The thing is we will learn from this, and the team and the whole panel will learn from this. It's one, going forward, that they will learn from and hopefully take the positives out of it. How we go from here is the most important thing as well.

“We have said this all year, this is only the start for them. Over the last two of three years, there have been strong minor teams and there is a very positive future for all of them but it's how we react, how we go on from here, whenever they go back at under 20 level, that's the most important thing. One swallow never made a summer so don't let it be one year of Offaly hurling, we've got to build on this at under 20 level and I have no doubt a lot of these players will go on to play at senior level for Offaly,” he said.

“From where I was looking at it, there are a couple of decisions I would question but hindsight is brilliant and when a referee referees a game he doesn't have the benefit of looking back at things but from our point of view it is just a very bitter pill to swallow,” he said.

“I don't mind being turned over but under the circumstances of what I am led to believe people are saying about some of the decisions - was it a penalty down here? Should we have got a free before they got the last ball in? Were they inside in the square? These are just questions that are being thrown at me. I don't have the benefit of hindsight, I've not seen these things but when they are young fellows and what they have done for the GAA today and how they carried themselves, how they performed, everything was a major major positive, but it's not just good enough when there are questions being asked after it. I'm not making any excuses for anyone, best of luck to Tipperary, they stole it on the day but it's on the scoreboard you win matches but when there are decisions being made and how they are, you just wonder is there a better way of doing this,” he asked.

He said he wouldn't say a sense he had a sense of injustice. “Fair play to Tipperary, they finished a point ahead. Decisions are made and I come from a background where my father refereeed three All-Irelands and I know what it's like, but there's so much pressure now and technology and I'm not commenting on any of the decisions, but I just want to make it clear, too many people have come up to me in the half hour after an All-Ireland and saying it's a complete injustice.”

In the follow up to the hurley throwing incident he was asked did he think the advantage should have been allowed as the ball fell to Daniel Hand?

“Yes, but when they struck the ball wide from their advantage he gave the free in and they put the ball over the bar. I'm not criticising anyone and I want to make that crystal clear but when you have decisions that go against you on a consistent basis like they did today, for minors, it leaves a sour taste after what has been a spectacular year in minor hurling in the whole of Ireland,” he said.

The Limerick man had great praise the whole occasion and the standard of the game. “The quality, the atmosphere, the intensity of it was just incredible and that is the most important thing.

“We were playing our seventh match and had won every one of them and Tipperary were in the same boat as us. I take my hat off to them, they kept going even though they went down to 14 men but they're human. We had that team right, they hurled extremely well today and we can't fault any of our guys. It's sport, it's cruel.”

Reflecting on the winning goal he said “that ball could easily have been batted 30 yards out the field, it was just a swinging hurley, it connected and ended up in the back of the net.”

Asked if the sending off had in some way helped Tipp, he said “the sending off helped them in the sense that the game was completely run ragged. When we were going man of man we had a pattern to the game but when it happens the game lost its shape and fellows pop up here there and everywhere.”

However, he was once again keen to stress the positives for Offaly. “Today was a huge day in their lives and they will be very disappointed with it but it is the start of the recuperation of Offaly hurling. It's not just based on one day. Offaly need to be back up playing McCarthy Cup, Offaly need to be back up contesting at this level. You see the people, by God are they a credit to them and that's the most important thing.”