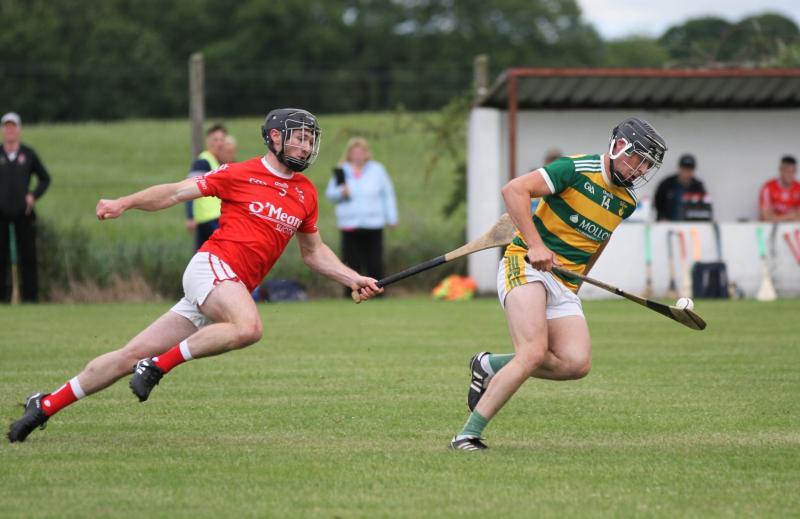 IN the opening round of the Senior Hurling Championship between Ballinamere and Shinrone on a miserable June Friday evening last, both sides finished all square and claim a point each from this outing. The Lusmagh venue was splendid and the viewing stand was packed for this game.

A massive effort was served up by Shinrone who were down several players due to injury, and while they managed to keep abreast, they failed to capitalise on the loss of Ballinamere’s wing forward Cormac Spollen to a second yellow, even though it came late in the game. Ballinamere’s chief free taker Brian Duignan was steady and reliable and didn’t disappoint either dropping over a total of ten points with two coming from play.

Both sides started strongly and swapped two points within the opening three minutes before Ballinamere pulled four points clear over the following six minutes. Shinrone hadn’t scored for ten minutes and at this stage of the play they were looking the strongest and when Joe Maher took a clever pass from Dan Bourke, he rounded Peter Cleary and drove his side into a five point lead. Ballinamere were on their way, or so it seemed.

Shinrone’s Luke Watkins won the dropping ball from the long Mark Troy puck out and wriggling his way through a barrage of opposition he split the uprights to reduce the deficit by one but Joe Maher wiped that out at the opposite end before the minute faded.

The stiff diagonal breeze saw Shinrone strike three successive efforts off course at a crucial time when they badly needed scores but they knuckled down with Paul Cleary and Luke Watkins finding target. However, it was Paul Cleary’s goal after twenty minutes that lifted the game and the fans too, as he brought the sides level for the third time.
Jason Sampson sent them one up as he grabbed hold of the ball when it came out of a ruck but Ballinamere struck back immediately through Dan Bourke and Ballinamere pushed on going three ahead again through Kevin McDermott, Brian Duignan and Mike O’Brien.

Shinrone mounted a further attack through Dan Doughan, Declan Cleary and Killian Sampson who drove the ball to the waiting Jason Sampson and making no mistake, Sampson split the Ballinamere back line right open and drove the ball past Mark Troy to the back of the net with two minutes to half time and to level the sides for the 5th time.

Both sides were missing valuable scoring chances but Shinrone worked the hardest in the final few minutes before the break with Adrian Cleary and Sampson sending Shinrone into a two point lead 2-8 to 0-12 at the break.

The second half brought heavy gusty rain and as the light began to fade. John Murphy brought the sides back to one point but Jason Sampson had a reply to that four minutes later. Joe Maher kept his side in touch while Declan Cleary kept Shinrone’s neck ahead.

Conditions were worsening with players slipping and sliding in the heavy rain and losing control of the ball with the wet conditions but Shinrone were using it smartly with Declan Cleary adding a point while Killian Sampson and Donal Morkan were involved in the build up.

Adrian Cleary and a free from Brian Duignan kept the score board clicking over as Shinrone led by three points. Ballinamere were working very hard and further points were swapped between Adrian Cleary and Dan Bourke with John Murphy closing the gap and Cormac Spollen bringing the game back to one point as the last quarter clicked over.

It was still all to play for as conditions worsened even more and it was going to take a titanic effort for Shinrone to hold out to take the spoils from this game with Watkins and Adrian Cleary combining to set up Paul Cleary who split the uprights and bring his side back to a two point lead.

Ballinamere upped their performance and Shinrone had to fight like dogs in the back line to keep them out but savage work rate was keeping Shinrone in it even though they gave away three further chances which Brian Duignan took full advantage of as he sent Ballinamere into a slender one point lead in the 54th minute. Both sides fought hard for possession as they both continued to fight tooth and nail for every ball with the elements playing havoc, for Shinrone the work rate paid off as Donal Morkan levelled proceedings in the 56th minute from a well taken free.

Ballinamere were dealt a big blow in their efforts to swing the result in their favour and before the final whistle when Cormac Spollen was shown a second yellow card which resulted in the red going up and he receiving his marching orders in the 57th minute. Shinrone had plenty of time to add further points but were unable to make the break through, as Ballinamere re-grouped and held out for the draw in a highly entertaining game.