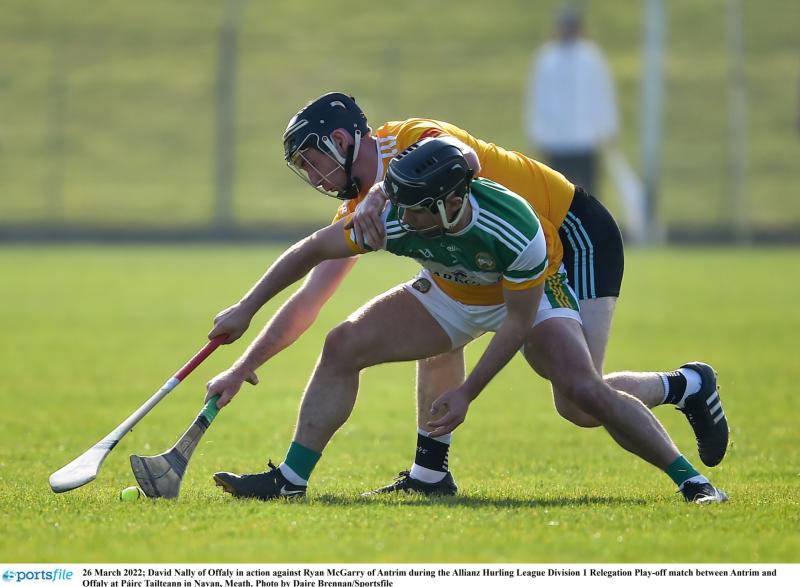 BELMONT held off a determined second half fightback from Seir Kieran to get their championship campaign off to a winning start with a one point victory at St Brendan's Park, Birr, on Saturday.

Trailing by seven points with 20 minutes left, Seir Kieran twice got the gap down to the minimum and had two efforts to level it in injury time but Joe Bergin's long range free from inside his own 45m line and another Stephen Hynes effort both trailed wide.

Belmont had looked the likelier victors for most of the game but they were left hanging on at the finish as Seir Kieran showed tremendous spirit to get themselves back into the contest but in the end they came up just short.

While the game finished it a welter of excitement, it didn't get off to a great start. Both sides struggled in the first half and David Nally and Joe Bergin were the lone scorers for either side until the final minute of the half, at the end of which Belmont led 0-8 to 0-4.

The fare did improve after the break and when David Nally netted seven minutes in, Belmont looked well on their way. They could have been further out of sight when they had the ball in the net again two minutes later but it was called back for a penalty for a prior infringement but that was saved. Seir Kieran took hope from that and gradually reduced the deficit. Belmont went five clear again with 10 minutes left but Seir Kieran kept coming and got it down to the minimum but couldn't get the leveller.

The standard of the first half left a lot to be desired. The game was littered with mistakes from both sides and while the strong wind didn't help, it wasn't an excuse for a lot of the errors made.

Up to the final minute of that half only one player on either side had scored and only one score had come from play, before Paddy Clancy lofted over a good point from midfield for Belmont. David Nally accounted for their other seven first half points, one from play, four frees, a '65' and a line ball. Joe Bergin accounted for all four Seir Kieran scores and he also registered both their first half wides, highlighting some of the problems in their attack.

Fortunately things did improve somewhat in the second half. Still with only 12 minutes left, only four players had scored, but Seir Kieran found a few more scores at that point and Belmont, who looked secure up to that point, began to feel the pressure. But in the end they did just enough to hold on for the victory.

Joe Bergin opened the scoring in the second minute from a '65' but David Nally quickly replied from a free. The same two players exchanged pointed frees before David Nally put Belmont in front for the first time with the first score from play after 13 minutes. He then added points from a free and '65' to leave his side 0-5 to 0-2 ahead after 20 minutes.

Five minutes later he lofted over a sideline cut from just inside the 45m line on the right and after Joe Bergin pulled back a point from a free, Paddy Clancy added a point from play for Belmont in the 30th minute. Perhaps fittingly the half ended with Joe Bergin and David Nally exchanging pointed frees to leave Belmont 0-8 to 0-4 in front at half time.

Appropriately the same two players exchanged pointed frees at the start of the second half before David Nally scored a delightful point from play off his stick on the right. Barry Kealy replied with a point for play for Seir Kieran before the game's only goal seven minutes into the half. Paddy Clancy made a good run forward before the ball was flicked to David Nally on the left and he fired to the net.

He had the ball in the net again two minutes later but the whistle had been blown for a penalty but Leon Fox's effort was excellently saved by Peadar Murray diving to his right. That gave Seir Kieran renewed hope and Joe Bergin pointed three frees followed by a point from play from Tom Dooley to leave just a goal in it with 12 minutes left.

David Nally settled things with two points from frees but Seir Kieran came again and Joe Bergin added two more frees followed by points from play from Luke Carey and Tom Dooley to leave the minimum in it with two minutes left. Damien Egan hit a crucial point for Belmont before Kieran Connors cut the deficit to one again with the game entering injury time. They had two chances to level but Joe Bergin's huge free from way inside his own half and Adrian Hynes' effort from the right were both off target and Belmont held on to win.

An easy one this. David Nally was the outstanding individual on show. He scored 1-11 of Belmont's total and also had a goal wiped out as the referee called it back for a penalty. He was a constant threat in the side of the Seir Kieran defence and got the 'grand slam' scoring wise, points from play, frees, '65' and a sideline cut, along with a goal.

David Nally's point in the fourth minute of the second half was a great piece of individual skill. He won the ball near the right sideline under the stand, side stepped his first opponent and then dummied as if to shoot to lose a second opponent and he then struck the ball off his hurley straight between the posts.

Richie Fitzsimons handled the game well throughout. Possibly could have waited a fraction longer to give the advantage to David Nally when he looked to have scored a second goal but he called it back for a penalty which was missed – but to be fair it did look like Nally was grounded and the chance was gone before he squeezed the ball home from a tight angle. He was in a great position later to award a point to Seir Kieran from a Joe Bergin free, which had initially been waved wide by the umpire.

The standard of hurling in the first half was poor from both sides. Both made lots of basic mistakes, misplacing passes, poor handling and bad decision making. Only three players managed to score with only two points from play in that half. Fortunately it did pick up in the second half but the first half showing from either team wouldn't have any of their forthcoming opponents shaking in their boots.

In round 2 Belmont face Coolderry, who will be having their first outing, while Seir Kieran will take on Ballinamere, who drew their first game, both games the weekend after next.

The pitch at St Brendan's Park was in very good condition for this contest. The PA was in operation announcing the teams and substitutes and all other arrangements were also very much in order.