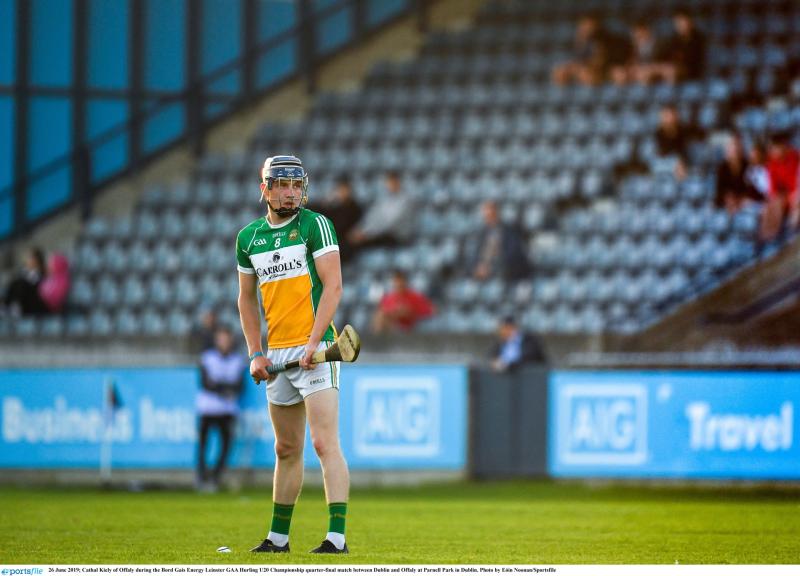 A SECOND half downpour at Rath turned what was quietly developing into an intriguing contest into a sodden arm-wrestle that was dominated by freetaking, and it was appropriate that ultimately it was a dead ball score that a settled matters between Kilcormac-Killoughey and Birr.

Cathal Kiely’s injury time '65' proved to be the decisive strike in the game, though both clubs showed enough craft and graft over the course of the hour to suggest that they will have plenty to say about the eventual destination of the Sean Robbins Cup.

Thunderous rain earlier in the evening cleared just in time for the start of the game and with the playing surface in immaculate order, supporters were set for a lively contest. A hard hit on Jack Screeney in the opening play set the physical tone into the bargain as players from both sides looked to assert themselves in the subsequent flashpoint, but the game soon settled on the back of Kiely whipping over the free.

Birr tried to keep the ball in hand and run at their opposite numbers from midfield and half-forward, and this bore early fruit as Dylan Quegan and Luke Nolan earned frees that Eoghan Cahill converted, and Nolan was to be a thorn in Kilcormac-Killoughey’s side throughout the game as he got heavily involved in the play and earned several more dead ball chances.

Kilcormac-Killoughey offered a little bit more from open play however as James Kilmartin, Conor Mahon, Cillian Kiely and Alex Kavanagh all shot excellent points from play in the first half, and from a situation where the sides were tied at 0-5 each with 21 minutes gone, the Double K’s were 0-10 to 0-8 to the good at half-time.

The rain was now beginning to fall heavily, however, and as the skies darkened, it became clear that the game would play on and conclude in really difficult conditions. Both sides continued to try to do the right things but working the ball up the field became very difficult, as did long distance striking, and a brief cameo moment around the 41 minute mark seemed insightful. Seán Ryan, not long on the field for Birr, won a good ball in the right corner and cleverly picked out Dylan Quegan running through. However instead of popping over an easy point, the young Birr player tried to run in on goal, and was swallowed up, leading to a turnover. From the next play, James Kilmartin made it 0-14 to 0-10, and in this game, that looked like a big lead.

However not alone had the rain come along to spoil the party, but there was also a freshening breeze blowing at Birr’s backs, something that hadn’t been a factor up to now.

Eoghan Cahill kickstarted their revival with a simple free, and that was followed up by a fantastic individual score from Morgan Watkins, who ignored his own lack of heft to drive in from the left corner along the end line before stepping back and whipping the ball over from close range.

Another Kiely free pushed the lead back to three, but Birr had their tails up now and a snap shot from Cahill, a gorgeous strike from distance from Brendan Murphy and a pointed '65' tied the game up.

Speaking after the game, Kilcormac-Killoughey manager Shane Hand said that he’d have taken a draw at that point, but in the end, he came away with both – in no small part because of a substitution he made with just a few minutes to go.

After a lengthy injury absence, Dylan Murray was sent into the fray and his value was immediately apparent when he snapped over the lead score. Again Birr replied through Cahill, and a draw seemed likely when a couple of uncharacteristic misses from Cathal Kiely kept the scores level, but Murray again came good when he won a ball in traffic and forced a '65'.

Showing incredible resilience after his previous misses, Kiely wiped the handle of his hurl dry and duly split the posts to make sure of the win.