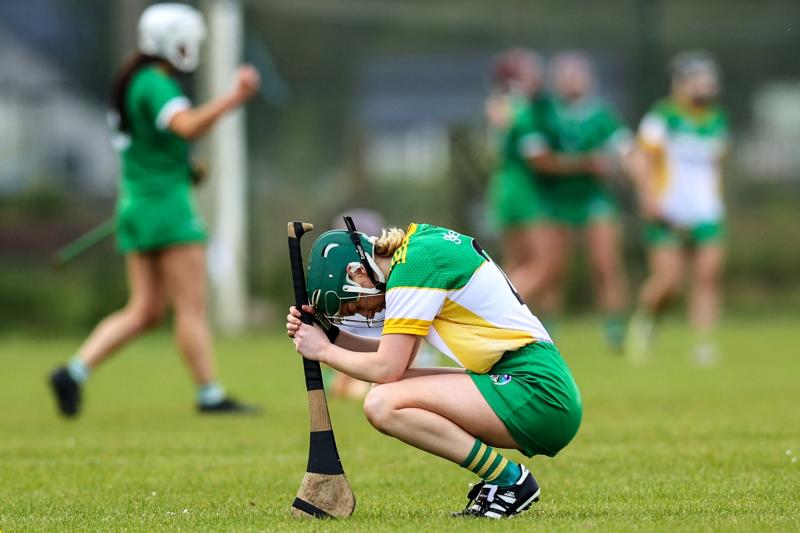 Offaly were bitterly disappointed to lose to Limerick on Saturday. Picture: Inpho

Limerick and Offaly met in the 3rd round of the All Ireland Championship on Saturday afternoon, only 2 months after their relegation playoff in the League.  On that occasion Offaly were victorious, winning by 3 points so no doubt Limerick would have been looking to gain revenge this time round.  Also with both teams having lost both their opening fixtures, this was an opportunity for one of them to claim a much needed victory.

The match was a fiercely fought encounter with little between the teams all through the game that was played with a stiff breeze blowing down the field.  Offaly had that advantage in the first half and started well when Aisling Brennan hit over a free in the first minute but Limerick replied quickly with a point by Caoimhe Lyons.  After that Limerick hit 3 poor wides before Sarah Harding pointed for Offaly but minutes later Caoimhe Costello converted a free to level the scores.

As the game progressed it became clear that fine margins would decide the outcome and a clearance by Limerick goalkeeper Claire Keating was blocked down by Offaly and Faye Mulrooney pulled on the breaking ball from a narrow angle only to see it flash across the goal mouth.

Mairead Teehan did give Offaly the lead with a pointed free but Costello replied by hitting over a brace of placed balls for Limerick.  The Faithful girls would have wanted to give themselves a cushion given the wind advantage in the first half and they would have been happy with how they finished the first 30 minutes when they hit 3 points from play with Sarah Walsh, Sarah Harding and Siobhan Flannery all hitting over to leave the half time score reading Limerick 0-4, Offaly 0-6.

When play resumed Limerick were presented with a goal chance but an excellent body save by Eleanor Clendennen in the Offaly goals kept her goals intact and her team received a further boost when Christine Cleary hit over after receiving a nice pass from Siobhan Flannery to stretch their side's lead.  But Limerick came back strongly and a Mairead Ryan point was sandwiched by two frees by Caoimhe Costello.

Throughout the game the Offaly team and management felt they were not getting the rub of the green from referee Liz Dempsey's decisions and this was not helped when Limerick were awarded a penalty midway through the second half.  Costello, however, failed to take advantage of it when she saw her shot strike the post and Offaly could breathe a sigh of relief.

Again, the teams cancelled each other out with Caoimhe Costello and Aisling Brennan hitting over from frees before Costello hit over a fine point close to the sideline and Roisin Egan pointing for Offaly to leave the sides level with just five minutes remaining.

Limerick markswoman, Costello then hit over two frees with time running out and Offaly's frustration at the referee's decision making boiled over late in the match when Sarah Harding received her second yellow card of the game.

Try as they might after that Offaly were unable to reel in the Limerick lead and the Shannonsiders were delighted when the final whistle blew and they had their first win of the campaign.  Offaly, however, were bitterly disappointed and now have the daunting trip to Kilkenny in two weeks' time and Susan Earner has a challenging task to lift her side for that match.