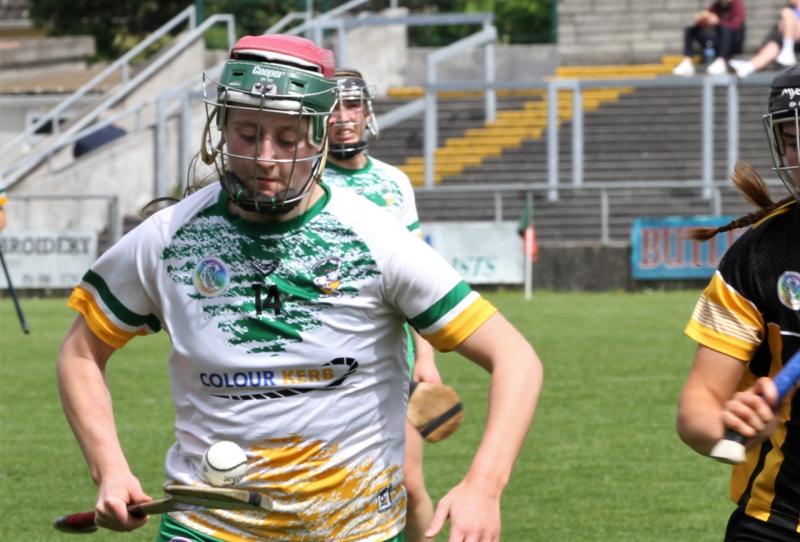 OFFALY gave an improved performance in a battling display against All-Ireland champions Galway in the sunshine at St Brendan's Park, Birr on Saturday and while their efforts didn't bring them a win, they did give Galway plenty to think about.

If Offaly had they taken more of their chances they could have been much closer to their opponents at the finish but to their credit they kept fighting to the final whistle and there wasn't as much between the sides as many people had predicted.

Offaly didn't show any hangover from their heavy defeat to Antrim the previous weekend and stayed with Galway throughout a low scoring first half. A goal midway through the half gave the Tribeswomen the advantage but Offaly restricted them to a single point in the second quarter and only trailed by four at half time, 1-4 to 0-3.

The first eight minutes of the second half proved costly for Offaly as Galway added a further 1-4 without reply. It would have been easy for Offaly to succumb from there but they didn't and Mairead Teehan's 42nd minute goal gave them a boost. They never seriously threatened the Galway lead but they didn't let Galway get away from them either and had they converted some late chances the final margin would have been much tighter.

Offaly now face a crunch game away to Limerick next. Limerick have suffered two big defeats and Offaly also beat them in the league relegation play off, so they can head into that game with realistic hopes of a win, which would certainly ease their relegation worries.

Offaly are doing a lot of things right and some individuals are really stepping up to the plate. But their decision making and execution at times is letting them down and they are being punished heavily for mistakes.

Offaly showed a lot of endeavour and commitment and probably should have had more to show on the scoreboard for their efforts but they missed some scoreable chances. They ae still finding it difficult to get scores and failed to raise a flag from play in the first half.

They stuck to their task well and the Galway forwards weren't able to find gaps in the Offaly backline, which worked very hard to keep them out. That was a big improvement on last week when Antrim cut them open at times, but Offaly withstood the pressure in this game and limited Galway's opportunities.

Orla Gorman, Grace Teehan and the impressive Aisling Brennan did well in the Offaly defence, Sarah Walsh worked hard in the middle of the field and Sarah Harding and Mairead Teehan were best in attack.

Sarah Dervan, Heather Cooney and Maria Cooney impressed in the Galway defence, Aoife Donohue had a fine game in midfield and in attack, Carrie Dolan, Aine Keane and Sabrina Rabbitte were best.

Offaly got the first score of the game when Aisling Brennan pointed a free from midfield but Carrie Dolan quickly replied with a Galway free. Sabrina Rabbitte cut in along the endline and went for goal but Eleanor Clendennen pulled off a fine save. Galway were awarded a penalty when Sarah Spellman was deemed to have been fouled but Carrie Dolan sent her effort over the bar. Straight from the puck out Galway won the ball back and Dolan pointed from play.

Midway through the half Galway got in for a goal when Sabrina Rabbitte again cut in along the endline, but made a better angle for herself on this occasion and shot to the net. Mairead Teehan replied with an Offaly free but was also off target with another as well as an effort from play. Five minutes before the break Aoife Donohue soloed forward and picked off a point and a minute before the break Mairead Teehan hit another free to leave the half time score 1-4 to 0-3 in Galway's favour.

Galway had an early chance of a goal in the second half but Sabrina Rabbitte pulled the loose ball just wide of the post. She did quickly add a point to their tally. Shades of last week, Offaly then tried a quick free but Galway intercepted and the ball was delivered in to Aine Keane, who made ground before shooting to the net. She added a further point, while Carrie Dolan pointed two frees and the lead was stretched out to 11 points.

Mairead Teehan scored Offaly's first point of the half from a free and two minutes later she got on the end of a long line ball from Aisling Brennan and her shot from 20m made it into the net. Carrie Dolan (free), Aoife Donohue and Niamh Hanniffy all pointed for Galway but Sarah Walsh and Mairead Teehan (free) replied for Offaly and the latter missed two further scoreable frees. Rebecca Hennelly added an injury time free for Galway to leave them nine ahead at full time.

Newcomer Sabrina Rabbitte made a very good impact for Galway. She showed strength and agility and a good eye for goal. She scored 1-1, was denied another goal by a great save by Eleanor Clendennen, and she kept the Offaly defence busy for most of the game.

The opening eight minutes of the second half were decisive. Offaly had restricted Galway to 1-4 in the first half but in those eight minutes after the break they doubled that tally as they raced out to an 11 point lead. It looked ominous for Offaly at that stage but they actually outscored Galway from there to the finish but the gap was too big to bridge.

Philip McDonald was up with the play and punished overcarrying and foul handpasses on a number of occasions. He issued a number of yellow cards, included a few for dissent, and he was always in control of the contest.

Offaly were much more competitive over the 60 minutes than they had been against Antrim the previous Saturday. They fought hard and stuck to their task and they tightened up considerably in defence. Scoring is still an issue and it took them 42 minutes to get their first score from play in this game, having gone the last 29 minutes of the previous game without scoring from play as well.

Offaly travel to play Limerick in round 3 on June 11th, while Galway play host to Down on the same day.

On a beautiful sunny evening, St Brendan's Park looked in fine condition and all arrangements were perfectly in place for the game.