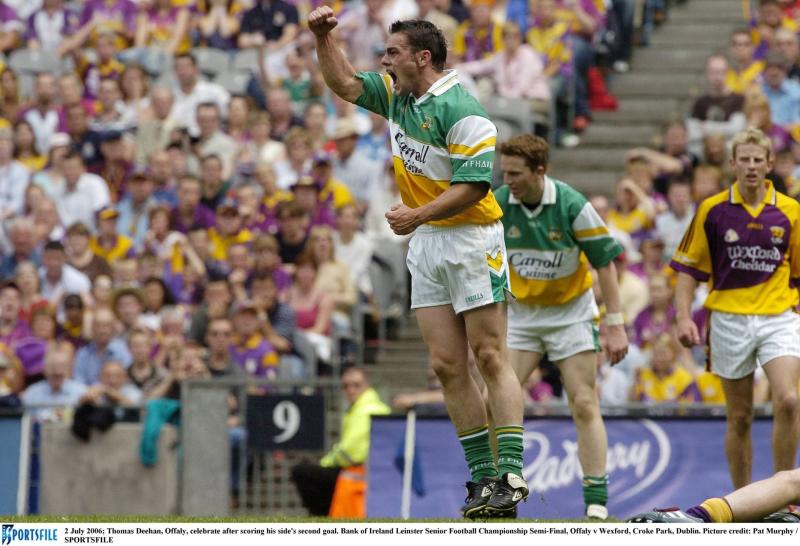 Thomas Deehan celebrating scoring a crucial goal for Offaly against Wexford in the 2006 Leinster SFC semi-final.

A FORMER Offaly footballer is recovering well from a major operation in the past week. Long serving Clara stalwart Thomas Deehan had a kidney removed after a growth was discovered on it shortly before Christmas.

Deehan had been selected on the Clara team to play Kildare's Kilcock in the Leinster Club Intermediate Football Championship semi-final a week before Christmas. The growth was discovered shortly before that game and he got his kidney removed in recent days.

The brilliant forward is now recuperating from his operation. He will of course be missing for Clara's Leinster Club Intermediate Football Championship final date with Trim in Navan on Sunday but as his club manager Mark Scanlon remarked this week: “There are more important things in life than football”.

Now in his mid 30s, knowledge of Deehan's health problems began to circulate over Christmas and the player, his family, his many friends and all who have admired and enjoyed his football for the past twenty years plus, are hoping that he makes a full recovery.

Deehan made a fine contribution as Clara as won the Senior "B" Football Championship title but went for tests as he wasn't feeling well and the growth was found.

Mark Scanlon stated on Monday that the player was happy for his health battle to go public as he wished to highlight the importance of people checking themselves regularly and quickly dealing with anything that doesn't feel right.

“It is so important to get anything checked,” Scanlon remarked as he paid tribute to Deehan for his excellent service to his club and county.

He outlined: “It all happened very quickly. He was picked to play against Kilcock (on December 18) but saw a specialist in Tallaght. Two weeks later, he had the kidney out. It was all very sudden."

Deehan got out of hospital on Sunday and Scanlon remarked: “He is very positive and is conscious of everything that he went through. He wants lads to get checked if they have anything. He got home yesterday and is doing very well.”

Deehan's operation comes a couple of years after a long time Clara team mate John Buckley passed away after a battle with cancer and Scanlon stated that it hit them all very hard coming so soon after that. “It was a big shock to the system and it hit us all a good bit. Thankfully Thomas has got through his operation well and we wish him well.”

Clara will now be using Deehan as a motivation for Sunday's final against Trim. “We want to do it on Sunday for him,” he said, revealing that Ross Brady has recovered from a calf injury that ruled him out of the Kilcock win. Brady's calf flared up in the warm-up for that game.

Thomas Deehan was one of the most experienced members on the Clara team that won the Senior “B” Football Championship with a fair degree of comfort last year. Clara had been dismayed to be relegated from senior in 2020 and made no mistake at bouncing straight back up.

Deehan's talent in his younger days was breathtaking. A brilliant natural forward, deadly off both feet, he was a real underage protege and he had a few excellent years for Offaly – I remember being dazzled by his ability the first time I saw him playing in an U-14 colleges game for Ard Scoil Chiarain, Clara in Portarlington in the 1990s. He played minor and U-21 football for Offaly and played 49 league and championship games for Offaly senior footballers from 2004 to 2011.

His best year was in 2006 when Offaly beat Westmeath, Kildare and Wexford to reach the Leinster senior football final where they competed well but were second best against Dublin. He started every game that year at corner forward and linked very well with Niall McNamee.

He has been a long time, ultra consistent performer for Clara. He was outstanding as they won the Senior Football Championship in 2003 and 2009 while he has continued to excel for them as many of his long time team mates drifted off the scene. He occasionally played midfield for them in recent years, introduced a new physicality to his football and the quality of his passing and distribution were a great asset to Clara – as his game evolved from being primarily a deadly finisher to a more play-making role.

Apart from Deehan, Clara expect to have a full strength team available for Sunday's final. Luke Kelly has returned home from New York and was on the Offaly panel for Saturday's O'Byrne Cup defeat by Dublin but he is not eligible to play as it is a 2021 competition.