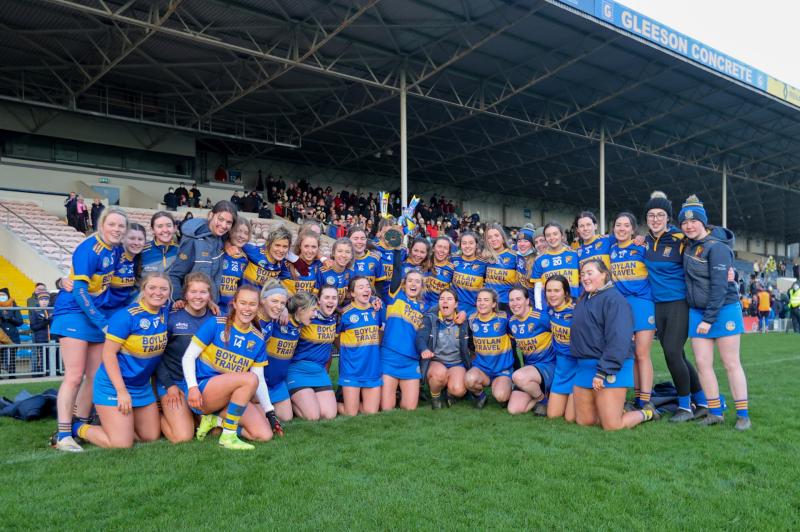 ST RYNAGH'S created history when they captured the 2020 All-Ireland intermediate camogie title for the first time with a well deserved four point victory over reigning champions Gailltir from Waterford in an exciting final played at Semple Stadium, Thurles, on Saturday.

St Rynagh's showed tremendous character, commitment and determination to overcome the side which defeated them in the 2019 final and they were pushed all the way by the defending champions before the final whistle signalled scenes of great jubilation for the Shannonsiders.

It was a tremendous all round team performance which led to this historic victory. They defended brilliantly, particularly when under pressure late in the game, goalkeeper Ellen Gilligan made some hugely important late interventions, while they worked very hard further upfield to get the scores that edged them in front and led to a famous win.

The game didn't start well for St Rynagh's as they found themselves two points down after just 41 seconds but they slowly settled into the game and got back on level terms after nine minutes. The sides were level four more times after that in the first half and went in at the break all square, 0-6 each.

They were level for a sixth and final time after an exchange of points in the first two minutes of the second half but then Rynagh's got a fortuitous goal when Aoife McLoughlin's shot was dropped over the line by Ciara Jackman. However they couldn't shake off a gallant Waterford side, who cut the gap to two points on three more occasions in the second half but couldn't get closer and late points from Kate Kenny and Mairead Daly sealed the win for St Rynagh's.

Having lost narrowly to Gailltir in the 2018 semi-final and then in dramatic circumstances in the 2019 final when Gailltir got a late goal, St Rynagh's were determined that they weren't going to be beaten for a third time by the same opposition. Their workrate was outstanding throughout as they constantly put the Gailltir player in possession under pressure, often forcing turnovers and their defensive work was excellent, rarely allowing Gailltir to threaten their goal.

Gailltir had an extra player in defence which meant St Rynagh's found it difficult to create space in attack and limited scoring opportunities. But they made the most of their chances as they only registered a single wide over the hour, from a difficult free for Kate Kenny. In fairness Gailltir wasted few opportunities either as they only had four wides.

That was another indication of how tight the game was. There was very little to separate the sides and consequently they provided an absorbing contest that was in the balance until the very end. There was never more than a score between them until the fifth minute of injury time when Mairead Daly put Rynagh's four points clear.

Having finished the first half level having played against the wind, it looked good for St Rynagh's when they goaled in the third minute of the second half. However they were unable to push further than three points ahead and had they done so they might have been able to break the resolve of Gailltir sooner.

However Gailltir were in no mood to give up their title lightly. They battled like true champions and as mentioned got the gap back to two points on three occasions but crucially missed a couple of chances to get in down to one. They were also denied a couple of times by Ellen Gilligan, once when she flicked the ball off the stick of a forward as she was about to shoot at the edge of the square, and also saved the follow up, and later when she advanced well to gather another ball and clear the danger.

Overall though it was a real team performance when everyone really contributed enormously to the victory with Elaine Sullivan, Roisin Egan, Grainne Dolan, Emma Corcoran, Helen Dolan, Louise Mannion, Katie O'Connell, Mairead Daly and Kate Kenny all being immense.

Ciara Jackman made one outstanding first half save, even if she will have nightmares about the goal. Hannah Flynn, Clodagh Carroll, Aoife Hartley, Shauna Fitzgerald, Anne Corcoran, Annie Fitzgerald and Aoife Fitzgerald were best for Gailltir.

Straight from the throw in Annie Fitzgerald got a point for Gailltir and when they won the puckout Aoife Fitzgerald slotted another over with just 41 seconds on the clock. St Rynagh's settled and Kate Kenny got them off the mark from a free after five minutes and added two more to edge them in front. Aoife Fitzgerald levelled from a free but Louise Mannion pointed from a difficult angle and Aoife McLoughlin was denied by a terrific save by Ciara Jackman, which left St Rynagh's 0-4 to 0-3 ahead at the first half water break.

As in the first half Gailltir came out flying and Anne Corcoran cut through the Rynagh's defence but under pressure shot over the bar, when she probably should have goaled. Kate Kenny levelled from a free and when she won the ball back after the puck out she passed to Aoife McLoughlin. Her shot dropped short but Ciara Jackman let the ball slip from her grasp and it crept over the line for a goal.

It was tight and tense and eight minutes elapsed before Anne Corcoran pointed again but Kate Kenny quickly replied with a free. Aoife Fitzgerald got a fine score from play to leave it 1-8 to 0-9 at the second half water break.

Thirteen minutes went by without a score as the tension rose. Ellen Gilligan made that terrific intervention to whip the ball off the hurl of a forward just as they went to shoot and with three minutes left Kate Kenny pushed Rynagh's three up again. But Gailltir wouldn't give up and Aoife Fitzgerald replied with a free and still four minutes of injury time to go.

Then Kate Kenny scored a superb point from right on the left sideline and when Roisin Egan landed a long free in the goalmouth, it broke out to the left where Mairead Daly won possession, made room for herself and fired over the insurance point. Gailltir still kept coming and had a couple of late frees where they went for goal but the Rynagh's defence held firm and the final whistle signalled that they were All-Ireland champions for the first time.

St Rynagh's had a number of contenders in what was a terrific team performance. Elaine Sullivan, Grainne Dolan, Emma Corcoran, Roisin Egan, Louise Mannion and Mairead Daly all had strong claims but scores win games and when it came down to it, Kate Kenny provided nine points for St Rynagh's, three of them from play. When it mattered most late in the game, she provided two fine scores from play, particularly the second one, and that ensured the Shannonsiders got over the line.

Aoife McLoughlin's fortuitous goal gave Rynagh's a small cushion in the second half but Gailltir were always in touch until the 33rd minute when Kate Kenny sent over a superb point from the left sideline about 20m out, which lifted the Rynagh's supporters and finally seemed to break the resolve of Gailltir.

Gavin Donegan applied the rules well throughout and was always in control. He was consistent in penalising both teams for overcarrying and also moved frees forward for dissent for both sides. He applied the advantage rule well and did a good job throughout.

St Rynagh's have created history by becoming the first Offaly side to win an All-Ireland Club camogie title. Having lost to the same opposition in the 2019 final, they weren't going to lose out again and their work rate and effort throughout was exceptional as they thoroughly deserved to lift the Una Ni Fharcheallaigh Cup.

St Rynagh's are crowned 2020 All-Ireland champions but they will very soon begin the defence of their title when the delayed 2021 championship gets underway.

On a biting cold January day, Semple Stadium was in good condition. The rain stayed away for most of the game but the surface held up well and the large St Rynagh's crowd was delighted to celebrate victory at the famous old stadium.