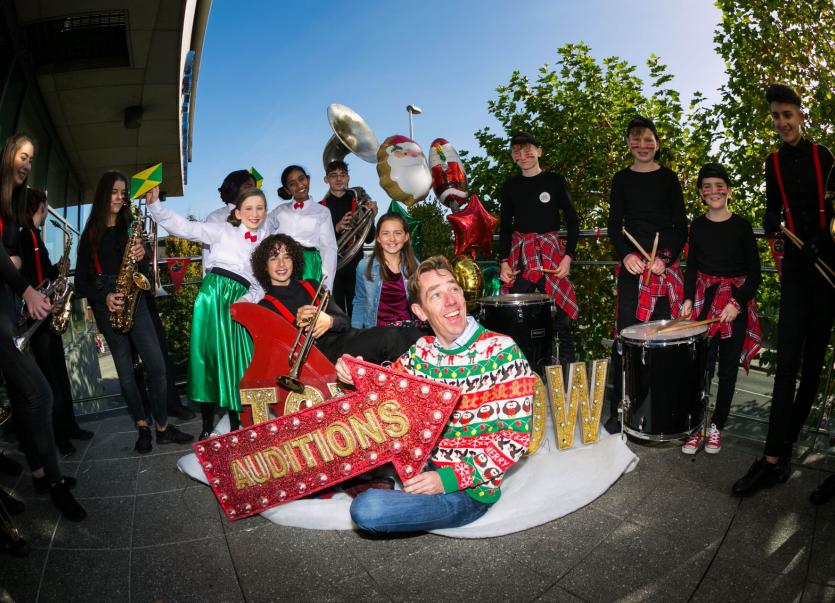 The Late Late Toy Show team are hitting the road this week to hold auditions in Limerick, Tullamore and Dublin to find the children who will charm the nation on the live television broadcast on Friday November 30.

The Late Late Toy Show regional auditions kicked off at the Strand Hotel in Limerick this morning and host Ryan Tubridy met with some of the hopeful auditionees at the photocall.

Children from the Dromineer Drummers from Galway, the Rebel Brass Jazz group in partnership with Music Generation Cork City and Barrack Street Band from Cork, the Scoil Mhuire Ballincollig Choir and soloist Anna Doody from Newcastle West put Ryan through his paces whilst showcasing their respective talents.

Ryan Tubridy said: “It's great being here in Limerick today - I love this time of year when we get to meet all the Toy Show hopefuls - it all starts to feel more real when we see the kids who'll be the stars of the show. The level of talent around the country blows me away every time. I can't wait for the viewers to see what we have in store this year."

"The auditions are very competitive - it's like The Hunger Games with tinsel! People want to do whatever they can to get onto this programme - because people like the joviality and the shenanigans and the goof and the world needs more of that because the place has gone very serious! My advice to anyone auditioning today is be natural, be happy and enjoy yourself.”

Over the next three days, The Late Late Toy Show team will see hundreds of hopefuls, meeting the best young singers, dancers, musicians and performers that Ireland has on offer, including here in Offaly. The auditions are invitation-only with auditionees drawn from thousands of applications received by the team since September.

During the tour the Toy Show team will be looking for energetic, stand out performers to take part in some of the night’s big musical and dance segments as well as the toy demonstrators who will roadtest various toys and explain the merits and pitfalls to the "Toy Man" himself Ryan Tubridy.

Late Late Toy Show producer Eimear O'Mahony said: “The team have been working away in our tinsel - strewn Christmas grotto/office in RTÉ for the past few months."

"We've been sifting through thousands of demos and audition tapes to whittle down the numbers so it's great to get out on the road now and finally meet this talented bunch of youngsters face to face. Every year we have amazing kids who put their hearts and souls into their performances. We know this year will be no different and we can't wait to see what special performances they have prepared for the Late Late Toy Show audience."

This year’s Late Late Toy Show will air on RTÉ One on Friday, November 30 and marks Ryan Tubridy's tenth time presenting the show.