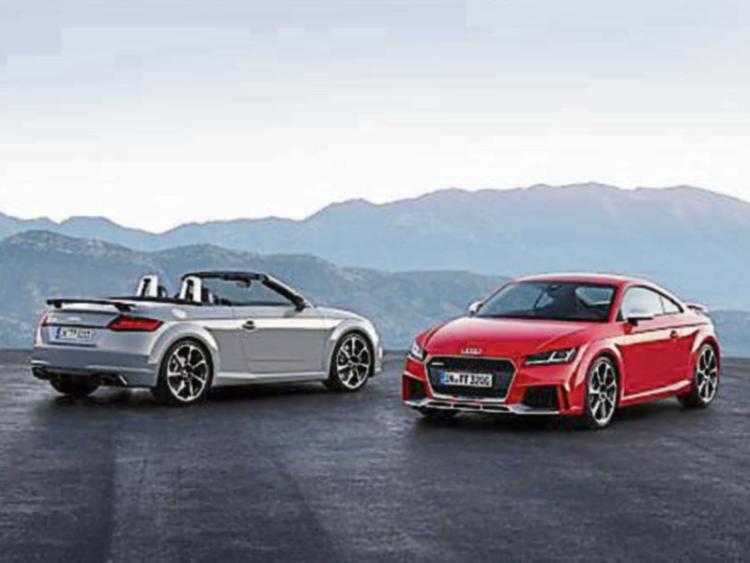 The sound: inimitable five-cylinder. The performance: tremendous at 400 hp. The traction: inexhaustible thanks to quattro drive.

As the sporty spearhead of the TT series, the new TT RS is to be marketed under the Audi Sport label.

At the Beijing Motor Show, Audi is presenting its Coupé and its Roadster for the first time to the world’s public. Sales in Europe will begin in autumn 2016.

“The new aluminium five-cylinder engine delivers 400 hp, which is 60 hp more than its predecessor,” says Dr.-Ing. Stefan Knirsch, Audi Board Member for Technical Development. “Together with the quattro drive, it ensures sporty driving pleasure with maximum traction. Audi uses Matrix OLED technology in the rear lights for the first time.”

A jury of international motor journalists has voted the 2.5 TFSI “Engine of the Year” six times in a row. Now Audi has further developed the five-cylinder engine in all areas – with lightweight construction measures, reduced internal friction and increased power delivery. As a result, the turbo engine gains a good 17 percent increase in performance at an unchanged capacity of 2,480 cc. At 400 hp, it is more powerful than ever before. The maximum torque of 480 Nm is available between 1,700 and 5,850 rpm. It ensures fantastic pulling power, which accompanies the unmistakable sound. Cylinders positioned directly beside each other and far away from each other fire in alternation. This brings with it a very special rhythm. The TT RS Coupé accelerates from 0 to 100 km/h in 3.7 seconds, the Roadster in 3.9 seconds – this corresponds to the level of a supercar. Audi regulates the top speed at 250 km/h, or at 280 km/h upon request.

For the best traction and plenty of driving pleasure: the quattro drive

The forces of the 2.5 TFSI engine flow via a seven-speed S tronic, which shifts at lightning speed, to the quattro permanent all-wheel drive. Its multi-plate clutch distributes the power freely between the axles. This provides strong grip and immense driving pleasure. The wheel-selective torque control makes handling even more agile and safe. Using the Audi drive select system, the driver can influence the quattro drive and other components such as the steering, S tronic, engine characteristic and exhaust flaps. The four modes available for this are comfort, auto, dynamic, and individual.