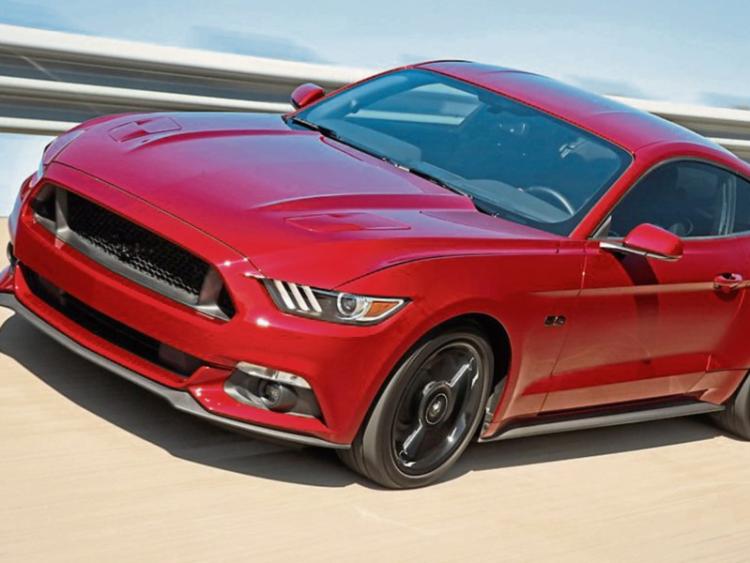 The original Ford Mustang was launched way back in 1964 and to say the least the Mustang has earned Iconic car status over its 50 plus years on the road, selling over nine million units since then.

However if a buyer in the UK, Ireland or other right hand drive markets wanted a

Mustang, and some did, a left hand driver model was your only option.

Well that has all changed with the launch this year of a specially developed “European” version of the iconic Mustang which is now also available in right hand drive.

There are two body styles available, a coupe and a convertible with two engine options, a mighty 5.0 litre V8 petrol or a 2.3 litre petrol Eco boost.

This week however I am behind the wheel of the big 5.0 litre V8.

This really is the version that lends itself to the true characteristics of an American muscle car and so while I doubt many will bear the painful €2,350 annual road tax and 18mpg fuel returns it really is the car to test.

I cannot think of any other car I have road tested recently that has attracted so much attention.

Kids want to photograph it and on a number of occasions I saw other motorists passengers taking a video of the car as we dove along the motorway.

Its big, its brash and its cool!

Inside the cabin is nicely finished with leather upholstery and judicious use of brushed aluminium trim.

It all looks very well.

The big dashboard and heavy gearshift leave you in no doubt that while designed with the European market in mind this is really is a big cruiser for the American highway.

Specification is excellent and too numerous to list here but it has everything you could wish for.

The external dimensions of the car lead you to expect a bigger interior.

The cabin is roomy up front but the two rear seats are strictly for the kids.

The boot is quite good and can hold a reasonable amount of bags.

Press the push button keyless start and this beast burbles into life rocking the car with its torque.

It sounds absolutely intoxicating and will be any petrol heads dream.

Acceleration is rapid and relentless but rapid cross country driving is hampered by a rather heavy and ponderous gearshift.

Forget about fuel economy if you buy this expect an average of around 20mpg on a good day!

American cars were never as good as their European counterparts in the handling department.

Designed primarily for big open straight highways, travelling at no more than 70 mph their cars were just not as good at stopping or going around corners.

So is the “European” version of the new Mustang up to it?

Well despite all the talk of new front and rear suspension which is “modified and tuned for Europe” it is not up to the standards of European sports coupe.

If you put the power down assertively in anything other than a straight line it will quickly start to spin the rear wheels and the tail will begin to oversteer even on a perfectly dry road.

Accelerate early out of a damp roundabout and the tail will swing out quite rapidly needing quick corrective action by the driver.

In short this car can bite back.

I am very familiar with many European brand sports coupes with 400 bhp plus going through the rear wheels and they are much more stable.

So this car is not he most fun to hustle along a twisty country road.

However on the motorway its a ver refined cruiser.

All said and done i could not fail to love the new Mustang.

Yes its a bit crazy, its a bit loud and maybe a bit brash. But in this ever more boring, politically correct world we live in its a breath of fresh air (forgive the pun).

I loved it and if you are into this sort of car you will too.