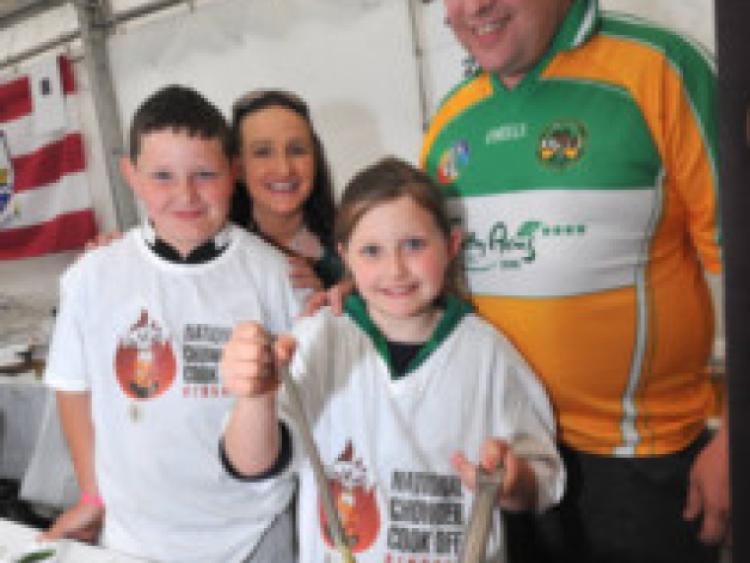 Kinsale Chamber of Tourism and Kinsale’s Good Food Circle are on the hunt for Ireland’s best chowder, and have put a call out to all corners of the country to find a representative from each of the 32 counties to compete in the All-Ireland Chowder Cook-Off 2013.

Kinsale Chamber of Tourism and Kinsale’s Good Food Circle are on the hunt for Ireland’s best chowder, and have put a call out to all corners of the country to find a representative from each of the 32 counties to compete in the All-Ireland Chowder Cook-Off 2013.

Following on from the phenomenal success of last year’s Chowder Cook-Off; Ireland’s gourmet capital is pleased to announce details of this year’s event which takes place on Sunday 21st April, in a bid to find Ireland’s top chowder chef. The All-Ireland Chowder Cook-Off will see a mix of 32 top professional restaurant chefs, fishermen and those producing popular commercial chowders, represent their county and compete for the coveted title of All-Ireland Chowder Champion.

Have you a secret ingredient that makes your chowder stand out from the crowd? Are people always saying you deserve an award for your chowder? Ever dreamt about representing your county? If you answered yes to any of these questions and think you’ve got what it takes, simply tell the Kinsale Good Food Circle why! Email maria@kinsalerestaurants.com and in 50 words or less, explain why you or your restaurant deserves to fly your county’s flag. The closing date for entries is Monday 15th April.

On Sunday, April 21st, selected finalists will travel to Kinsale to serve pots and pots of delicious creamy chowder in Acton’s Hotel from 12-4pm. Members of the public will be the judges in this highly anticipated contest, and everyone will receive a voting card upon entry which allows them to sample all chowders from the individual stalls and cast their vote to crown Ireland’s chowder champion 2013.

The winning chef will not only be crowned All-Ireland Chowder Champion, but will also receive a customised trophy and have the opportunity to represent Ireland at the Newport, Rhode Island Great Chowder Cook-Off next summer. 2012 winners, The West Bar, Westport, Co. Mayo jet off to the prestigious competition this June.

Hal McElroy, Chairman of Kinsale Chamber of Tourism said, “Being renowned as Ireland’s gourmet capital, this competition offers the perfect platform to showcase the wealth of talent that exits amongst Ireland’s chefs when it comes to chowder recipes. Last year we had chefs from most counties in Ireland, but this year we want one from EVERY county in the country represented at the event, so don’t be shy. It’s so simple to enter, just tell us why you should be selected and you could be joining in the fun on April 21st.”

The All-Ireland Chowder Cook-Off is the pinnacle of a two day Family Festival that is being held in Kinsale on Saturday 20th and Sunday 21st April. The town will be transformed in a massive open air street market with food stalls and lots of fun family activities throughout the town. Food stalls hosted by many of the local businesses will sell delicious samples and dishes for under €5, and there will be something for everyone to enjoy.

Tickets for Sunday’s All-Ireland Chowder Cook-Off, which include samples of all chowders, are €10 each or €25 for a Family Ticket (two adults and two children under 12); and are available at the door.

For more information on the All-Ireland Chowder Cook-Off and all that Kinsale has to offer visit www.kinsale.ie and www.kinsalerestaurants.com.