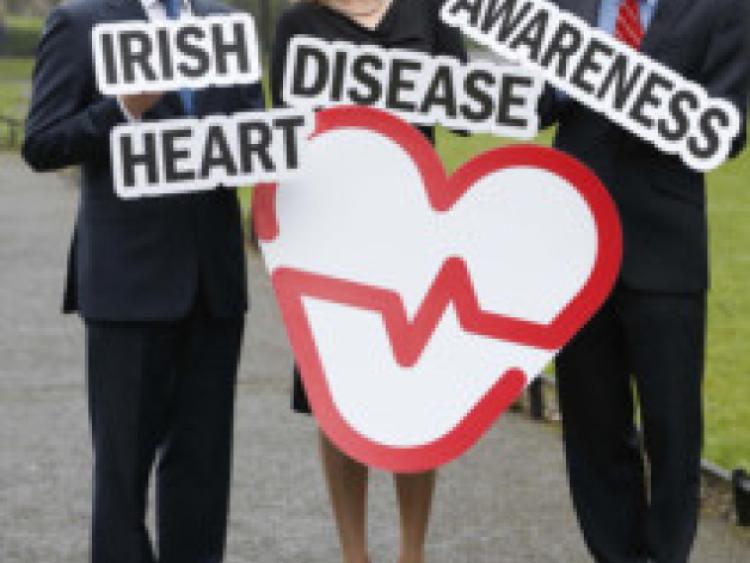 A new charity, Irish Heart Disease Awareness has been created to raise awareness of heart disease as a detectable, progressive and manageable disease that can be detected by a simple calcification test

A new charity, Irish Heart Disease Awareness has been created to raise awareness of heart disease as a detectable, progressive and manageable disease that can be detected by a simple calcification test

You are probably not aware that there is a simple calcification test that can tell if you have heart disease and that the disease can be managed to reduce the risk of death from heart attack.

The majority (97%) of people have never been advised of heart calcification by their doctor despite heavyweight clinical data that supports the use of calcification screening to better identify heart disease.

This was revealed at the launch of a new charity, Irish Heart Disease Awareness (IHDA), which has been created to raise awareness of heart disease as a detectable, progressive and manageable disease that can be detected by a simple calcification test. The charity is calling for people to visit their doctor to discuss this and for Ireland to adopt international best practice by having calcification scoring included in cardiovascular risk assessment in asymptomatic adults at moderate risk. Visit www.ihda.ie

Cardiovascular disease, which includes stroke and other inflammatory conditions, is the most common cause of death in Ireland, accounting for 10,000 (or 36% of) deaths each year.3 Heart attacks are the biggest killer, accounting for 5,0005 deaths each year with 3,500 of them being sudden. 50%of all heart attacks occur in people who did not know they had heart disease and almost half of them die from their first attack.

IHDA wants people to understand the risk posed by heart disease, to know if they have the disease, and if they have, to take action to reduce their chance of having a heart attack. IHDA encourages people to visit their doctor and discuss this disease.

Entrepreneur and founder of the IHDA charity, David Bobbett, who attended the launch, will feature in an RTÉ documentary entitled, Heart of the Matter, which will air at 10.15pm tonight (March 7) on RTÉ One.

Commenting on the launch, Mr Bobbett, said, “During a routine check-up in the US in 2011, I had a calcification test. I discovered I had a calcification score of 906. It was only when I embarked on a personal journey of research and discovery that I learned that I was a 52 year old with the heart of an 87 year old, and was at serious risk of a heart attack.”

Calcification is the build-up of a fatty gooey plaque in the coronary arteries. 70% of sudden heart attacks are caused by ‘plaque rupture’.

“The calcification test saved my life. By diagnosing my heart disease, I was able to readjust my lifestyle to significantly slow the disease progressing. Had I known about this test when having my annual medical checkups in Ireland, I could have prevented my disease from progressing even to the stage it is at now.”

He added, “The IHDA charity wants to raise awareness that heart disease is a progressive but, manageable disease that can be detected by a simple calcification test. We want to ignite a national debate about making the calcification test readily available to everyone in Ireland in accordance with International Best Practice. There are already a number of screening programmes for various cancers (even though there are more deaths from Heart attacks than from all cancers combined) and IHDA is now calling for a similar approach to screening for heart disease.”

UCLA cardiologist, Fellow of the American Heart Association and long-time champion of the calcification test, Dr. Matthew Budoff, commented, “The calcification test is the most powerful predictor of a future heart attack, more so than all other traditional tests combined. In addition, studies have revealed that showing patients the damage caused by calcification leads to better adherence to medication and lifestyle changes that improve their heart health. And yet, many people have not heard about it because there is faint appreciation among the medical profession for the test.

“At the moment people are sleep walking when it comes to knowledge of their own heart health and doctors are treating the event – the heart attack or stroke - rather than the disease. In Ireland, the focus is on the high-risk category of patient, rather than the middle risk category where most heart attacks happen. Until screening is available, those in the middle risk group need to be treated as high risk, and we need to recognise the importance of early diagnosis of heart disease and learn how to manage the disease well over time.”

Speaking at the launch, Dr Orina Belton, Lecturer, School Of Biomolecular & Biomedical Science, UCD Conway Institute, UCD, Dublin said, “A calcification test is a straightforward CT scan that can identify if there is calcification, a key indicator of atherosclerosis and heart disease, even before symptoms occur, it can also predict if you are at risk of a heart attack in the future”

Irish Heart Disease Awareness is launching a new website today, www.ihda.ie, where the public can access information on heart disease, watch the Heart of the Matter documentary, and hear further expert-led advice on best-practice heart disease management.  Website users can also register their support for the calcification test to be made available to everyone in Ireland in accordance with International Best Practice.

The calcification test is currently only available in eight healthcare centres in Ireland, including the Blackrock Clinic, Mater Private Hospital, UPMC Beacon Hospital, the Hermitage Clinic in Dublin, Vista Primary Care in Kildare, Cork University Hospital and the Bon Secours Hospital in Cork, and Merlin Park University Hospital in Galway. The calcification test costs between €325-400 and is available on a GP referral basis.

IHDA encourages you to visit your doctor to find out more about the calcification test. To get involved in the conversation or to hear what other people are saying about the campaign on Twitter, use #heart.