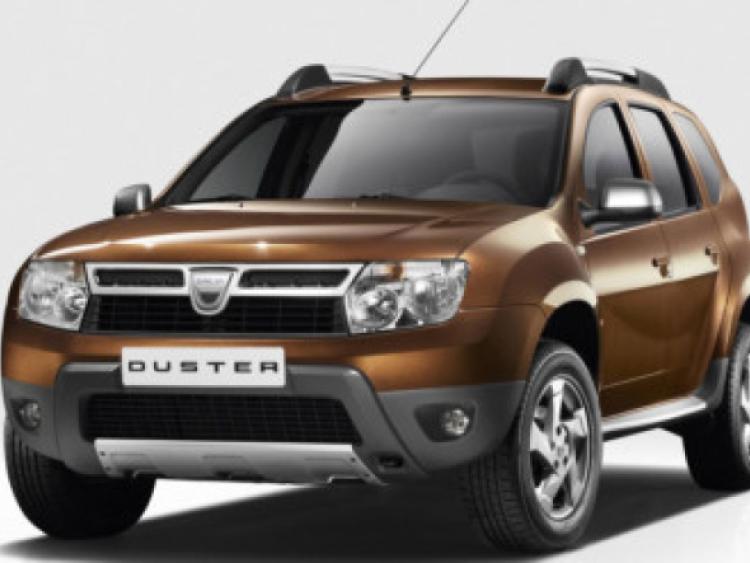 Who are Dacia I hear you say? Well Dacia are a Romanian car manufacturer who have been around for quite some time but recently taken over by Renault.

Their cars are based on tried and tested Renault running gear and chassis. Over 1,100 Dacia have been registered so far in 2013. The Duster is currently number 4 in the busy 4x4 segment and at 1.5% market share, looks like Dacia’s simple range of cleverly designed cars continues to appeal. Dacia have won numerous European awards and sold more than 2 million cars since 2004. The range consists of three models with the cheapest starting at just €9,990 and the most expensive being €19,990. The three models on offer are the Sandero a five door hatch, the Duster a mini 4x4 type vehicle and this weeks newcomer which is in the showrooms from the end of September, the new Logan MCV (Maximum Capacity Vehicle). Another new abbreviation to remember!

The new Logan MCV will seat five adults in comfort, comes with a choice of three economical engines and a starting price of just €11,190.

Its 573 litre boot which expands to 1,518 litres with the rear seats folded down, A 60/40 split-folding rear seat and a forward-folding front passenger seat also make for maximum flexibility when driving with rear passengers or transporting longer items. Engines in the new Logan include, a TCe 90 3-cylinder turbocharged petrol engine combines peppy performance with frugal fuel efficiency and CO2 emissions of just 116 g/km. Or the Renault dCi 90 diesel engine, with combined fuel consumption of 3.8 l/100km (74.3mpg) and CO2 emissions of just 99 g/km, both with ECO mode. With two trim levels, Alternative and Signature, and a 5 year unlimited mileage warranty the new Logan seems to offer alot at a very good price. To give you a flavour Dacia’s offering we drove the Duster mini 4x4. It is available in three models, two 2- wheel drive versions starting at just €15,990 and €17,990, or the top line Signature 4x4 costing €19,990. All come with a full three year warranty (5 years optional) and are powered by Renault’s tried and tested 1.5 Dci diesel engine. The styling is pretty good. The lines are clean and attractive and overall the Duster looks like a purposeful off-roader should. The dashboard instruments and levers will be familiar to any Renault driver. Some of the switch gear is a bit poorly placed but works pretty well. The centre console houses the usual heating and ventilation controls, as well as Bluetooth stereo which is the less seen individual stereo unit and not the integrated type. It has an AUX port and a USB port.

The driving position is good with the extra height of the Duster. Standard equipment is as you might expect at this price point, reasonably basic. You get ABS, ISOFIX, and four airbags, (no side curtain airbags) the aforementioned stereo, with remote controls, front electric windows, power steering and alloy wheels. You will pay extra for air con, a trip computer, side electric mirrors and so on. Accomodation is good seating four adults in comfort with a decent load area.

The 1.5 Renault dci diesel produces 110 bhp and is mated to a 6-speed gearbox. The combination works very well, this new Dacia Duster is quite lively and has plenty of get up and go when needed. I found its frugal too burning just 6.1 litres of diesel per 100km. With emissions of 130g/km. On or indeed off-road this new Duster is impressive. On tarmac it is reasonably quiet and refined and handles very well. Road wind and engine noise are all well suppressed. It hums along all day at motorway speeds in an un-fussed comfortable manner. I decided to try a bit of mild off roading. The 4x4 system is simplicity itself. Either leave it in Auto and should the wheels slip it will automatically transfer drive to all four wheels or for more challenging conditions set the switch to lock the differential and it really can tackle proper tricky slopes and hills. It is a very capable off-road.

I came to my test drive of the Dacia Duster expecting a basic rudimentary vehicle. I was surprised at just how good the Duster proved to be. I really pushed it on motorways, back roads, down unsurfaced country boreens and off road and it performed very well indeed. It felt rugged and well built, yes the specification is light but so what at this price. From €15,990. Really you need to drive the Duster to believe in it and I am converted.