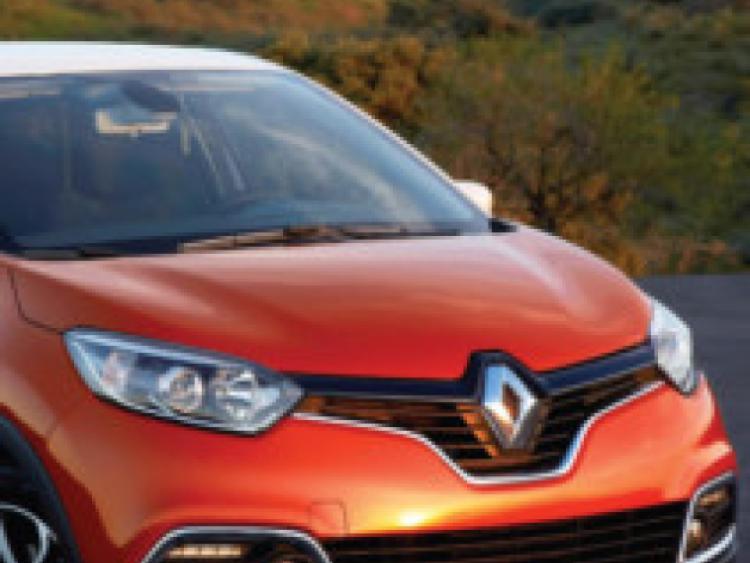 Captur, the new urban crossover from Renault will hit Irish roads this July, bringing a welcome splash of colour and glamour to the B segment. A unique blend of MPV, SUV and family hatchback Captur will appeal to a particularly broad spectrum of customer tastes.

Captur, the new urban crossover from Renault will hit Irish roads this July, bringing a welcome splash of colour and glamour to the B segment. A unique blend of MPV, SUV and family hatchback Captur will appeal to a particularly broad spectrum of customer tastes.

Though compact, it is very roomy thanks to a key feature, a sliding rear seat which has fore-and-aft travel of 160 mm and provides up to 215mm of knee room for rear passengers. Here’s what to expect when Captur hits Irish roads this summer.

• Two engines available in Ireland - 100% turbo - including the Energy TCe 90 S&S (three cylinders and 898cc) and the Energy dCi 90 S&S engine which uses just 78.4mpg and emits just 95g of CO2 per km. These two engines will be available on both trim levels from launch with a dCi 90 EDC engine following in 2014.

Captur will be in Irish showrooms from 1st July.

Captur, the French marque’s chic new entrant will be looking to emulate the impressive start for New Clio, with which it shares its underpinnings and much of its style. With keen pricing and a series of life-simplifing features up its sleeve, it will also be looking to make serious inroads in the booming B-segment crossover class. Led by the Nissan Juke, the market’s already growing fast on the back of the MINI Countryman and the slightly larger Opel Mokka and Nissan Qashqai. It’s expected to explode even more with the future launches of rivals such as the Fiat 500X, Ford EcoSport and Peugeot 2008.

Renault’s latest compact car, Captur takes its name and inspiration from the striking three-door concept from 2011. Aiming to have quite an impact, and not just with its looks, the newcomer will be both attractively priced versus the competition, not to mention very well equipped right from the entry trim level. Powering Renault’s latest creation are two 100% turbo engines, including the TCe 90 and 1.5 dCi 90. An EDC (Efficient Dual Clutch) version of the dCi 90 will follow later in 2014. Improving fuel economy and helping to drive down emissions still further, Stop&Start is standard on every manual version.

Renault’s new entrant combines the best of three worlds: the style and driving position of an SUV, the cabin space and versatility of an MPV and the driving experience of a compact hatchback. It’s also been designed in such a way that its beauty is more than just skin deep!

Underneath its contemporary, inoffensive style are several clever practicality touches which should prove a boon to all types of buyers, including one of the biggest boots in the class. With the rear seat bench slid forward, and including the storage area under its dual height boot floor, its 377-litre boot increases to a sizeable 455 litres. With the rear seats folded it will swallow up to 1,235 litres. The boot floor not only allows valuables to be hidden away from prying eyes, it’s also reversible, carpeted on one side, with rubber on the other. The latter gives a myriad of uses, whether it’s just to cope with wet shopping bags or boots in winter, through to dog hairs and mud, come rain or shine. It’s also removable, so owners can free up even more boot space whenever they need to. At launch, the Renault Captur is offered in a choice of two trim levels: Life and Intense. Further details of theses trims specs and pricing will be announced at launch.

The likely Irish best-seller, Intense, brings in the world of personalisation as well as the zipped seat covers which can be simply wiped or washed. They can also be replaced to freshen up the interior come resale time. Its personalisation comes in the form of a chrome Colour Pack (combining both Interior Touch and Exterior Gloss) covering the headlight surrounds and tailgate strip, plus centre console, air vent and gearlever gaiter surrounds among others. Intense features MediaNav as standard, the integrated multimedia tablet with seven-inch touchscreen, including Navteq Nav ‘n’ Go satellite navigation, R-Plug & Radio+, Bluetooth, USB and handsfree technology. It also has cornering lights and a leather steering wheel (with gloss insert) and gearknob.