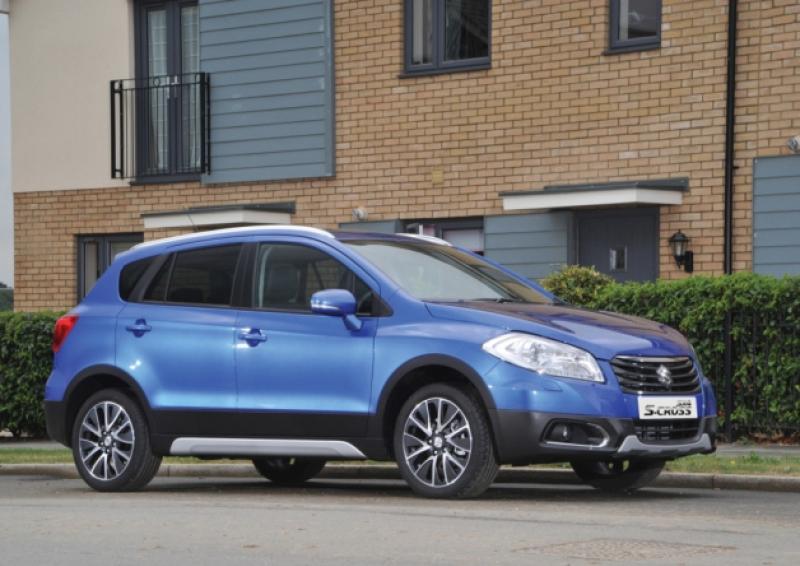 SX4 and it was worth the wait. This might be a bit of two cars, there’s a five door hatch

in there but it has a sprinkling of off road and it’s served on a bed of crossover. There’s no doubt that Suzuki have the Nissan Qashqai in their sights when they were putting it together.

The exterior styling is very good, there is a first feeling that the headlights might be too big but you’ll soon see that the fit in with the overall look of the car.

There’s some nice lines down the side and the back is well rounded. It’s smaller than it looks in pictures, but that doesn’t compromise interior space there’s plenty of space in the cabin for 5 adults.

The boot is 430ltrs with a split floor and shopping bag holes with hooks.

The cabin materials are top notch with a touch screen sat nav on top models but every model will have bluetooth, cruise control with speed limiter and manual air conditioning all as standard which is brilliant considering prices start at €19,995.

On the road the SX4 is stable and easy to drive, the steering is a little on the numb side but that’s what’s needed for this kind of car.

The suspension is surprisingly good at cushioning out the road surface and the high seating position means that it’s a nice place to be for either the long or short journey.

The SX4 will be available with either 1.6-litre petrol or 1.6-litre DDiS engines offering class leading CO2 emissions and low fuel consumption - 1.6DDiS 2WD emits just 110g/km of CO2 with fuel efficiency of 4.2 litres per 100 kilometres on the combined cycle.

It also comes in 4x4 mode or Allgrip as Suzuki call it, there’s a selectable knob in the

middle of the console that gives you 4 modes, Snow, Sport, Auto and Lock.

Auto does what it says, changing where the drive is going as you need it,

Sport changes the throttle response and allows the revs to get going, Snow puts you in 4wd mode and Lock will get you out of mud.

This isn’t an off road car and Suzuki aren’t pitching it there but it will get you out of trouble in winter.

Suzuki should do well with the SX4, it’s a very tidy car and really good value for money.

It’s worth noting that the €19,995 price is for the first 6 months of sales, the price will be reviewed after that. It’s a fine car and I would certainly consider it if I was in the market for a crossover, full test later this year.

It was introduced in Japan on December 1, 2005, and internationally at the 2006 Geneva Motor Show.

Designed by Giorgetto Giugiaro’s Italdesign studio, the SX4 (an abbreviation of “Sports X-over 4 all seasons”) replaces the Aerio (Liana in some markets).

The “SX/4” designation was previously used by American Motors (AMC) for a sporty liftback model in its all-wheel drive AMC Eagle passenger cars.

Although originally intended solely for the European market, the SX4 is sold in most of Suzuki’s international markets. It falls within Japanese regulations concerning vehicle external dimensions and engine displacement for a car classified as a “compact”.