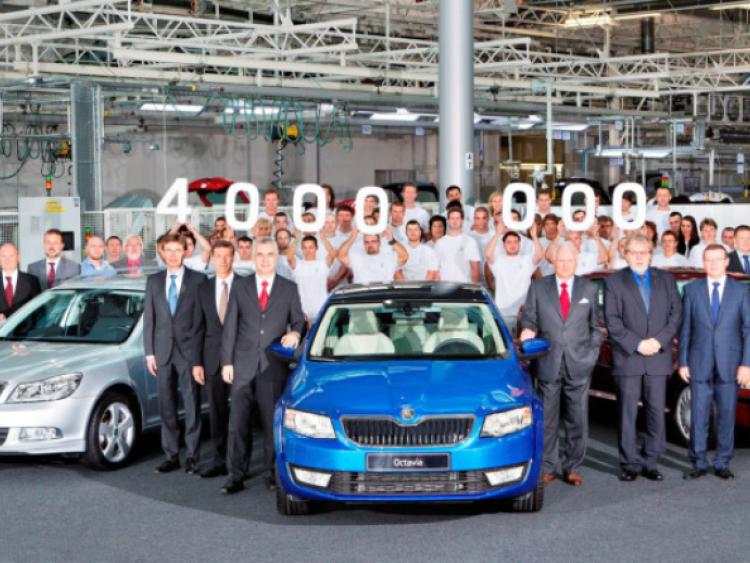 Now an integral part of the motoring landscape here in Ireland, internationally ŠKODA has just produced the 4,000,000th ŠKODA Octavia.

Now an integral part of the motoring landscape here in Ireland, internationally ŠKODA has just produced the 4,000,000th ŠKODA Octavia.

The anniversary vehicle – a third-generation Octavia in ‘Race-Blue’ rolled off the production line this week at the Mladá Boleslav main plant. The ŠKODA Octavia has been setting standards in the compact segment since 1996 and is by far the brand’s best-selling model.

“Four million Octavias produced – this impressive figure represents the great success of the model and brand,” says ŠKODA CEO Prof. Dr. h.c. Winfried Vahland. “As the ‘heart of the brand’, the Octavia has decisively shaped ŠKODA’s outstanding development and made the company what it is today – an internationally successful manufacturer, present on over 100 markets worldwide. We are continuing this development with the third generation. The new Octavia is once again a winner with its excellent ŠKODA genes. It is the largest, lightest, safest, most practical, comfortable and environmentally friendly Octavia ever.”

Here in Ireland, more than 42,000 Octavias have reached customers and according to Raymond Leddy, Head of Marketing for ŠKODA Ireland, Irish customers have grown to love this model in particular. “The Octavia marked the real turnaround of ŠKODA in Ireland and to this day remains the core model of our range. We are constantly hearing from customers around the country who have put up extraordinary miles on their cars which is a credit to the car’s reliability and in the used market these cars are still really desirable.”

The Octavia has always been the epitome of a ŠKODA: timelessly elegant design, above-average space, highest functionality, many Simply Clever features, sophisticated modern technology, quality and precision and not least unbeatable value for money. The launch of the third generation in early 2013 topped all of that again. The new Octavia offers mid-class qualities for the price of a compact, now more than ever.

At its launch in October 1996, the Octavia was the first completely new ŠKODA model after the fall of the Iron Curtain and marked the start of the partnership between ŠKODA and Volkswagen. Nearly four million Octavias had been delivered to customers worldwide between 1996 and July 2013 - around 38% of the brand’s total sales in this period, making the Octavia the undisputed best seller in the 118-year history of the company.

This also makes the new Octavia the most important model in the most comprehensive product campaign in ŠKODA’s corporate history. The manufacturer is promoting its high-impact path of growth with a powerful model extravaganza. The aim of this growth strategy is to increase the number of vehicle sales worldwide to at least 1.5 million per year by 2018.

In the first half of 2013, the Czechs presented their new bestseller in four versions: the saloon, the Combi and Combi 4x4 as well as the sporty Octavia RS which has just gone on sale here in Ireland - with a top speed of 248 km/h, making it the fastest series-produced Octavia ever.

As the cornerstone of ŠKODA’s growth strategy, the Octavia is an international success story. In addition to its manufacture at ŠKODA’s main plant in Mladá Boleslav, the compact car is also produced in Russia (Nizhny Novgorod), India (Aurangabad), Ukraine (Solomonovo) and Kazakhstan (Ust-Kamenogorsk). Additional production is also planned from 2014 in China; ŠKODA’s strongest individual market. “The ŠKODA Octavia is a car for Europe and the world, now more than ever,” says Vahland.