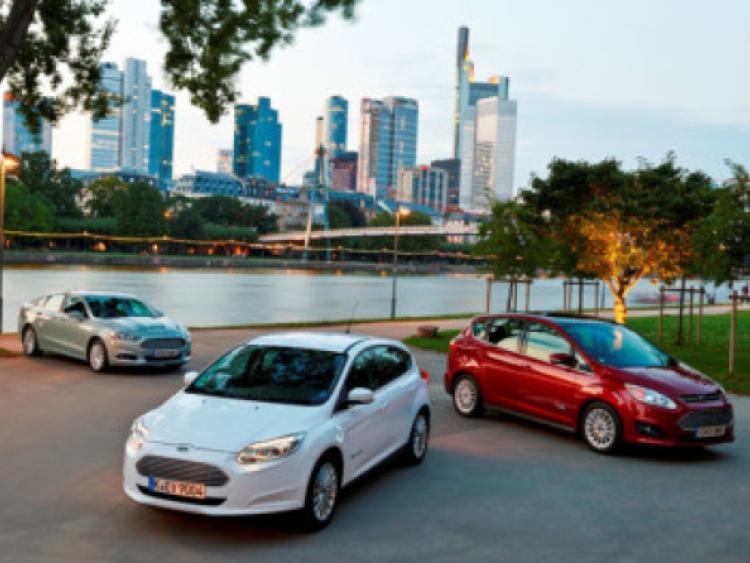 Ford Motor Company said it will offer a choice of three distinct electric vehicles in its European showrooms by 2014 to complement its line-up of fuel efficient petrol and diesel powered vehicles.

Ford Motor Company said it will offer a choice of three distinct electric vehicles in its European showrooms by 2014 to complement its line-up of fuel efficient petrol and diesel powered vehicles.

Coming next year will be the new C-MAX Energi plug-in hybrid and the Mondeo Hybrid. They will join the Ford Focus Electric, a zero emission battery electric vehicle built in Saarlouis, Germany, which will arrive in Ireland in early 2014.

“Ford is leveraging our global experience and expertise to roll-out a range of electrified vehicles that offers a wide and compelling power of choice,” said Barb Samardzich, vice president, Product Development, Ford of Europe. “European customers care deeply about the environment and are increasingly seeing electrified vehicles as a way of balancing those concerns with a commitment to car ownership.”

Ford is the manufacturer of the second-highest number of hybrid vehicles in the world and the company’s share of the electrified vehicle market has quadrupled in the past year in the U.S., where Ford recently announced electrified vehicle sales of about 46,000 units this year through June – more than 400 per cent increase compared with a year ago.

Ford’s line-up of electrified vehicles will include:

* Focus Electric which features an advanced electric motor and lithium-ion battery powertrain that produces 142 PS, achieves a top speed of 137 km/h and has a driving range of 162 km. The 6.6 kW fully integrated on board charger can charge the 23 kWh liquid cooled lithium-ion battery pack in 3-4 hours, when plugged to 32 amp grid connection.

* C-MAX Energi which is Ford’s first production plug-in hybrid and combines hybrid electric technology with a 7.6 kWh lithium-ion high-voltage battery. It is targeted to provide CO2emissions below 50 g/km and to run in pure electric mode for more than 30 km. Connected to a charging station it can be fully recharged in less than 3 hours.

* Fusion Hybrid which combines an internal combustion engine with an electric motor and battery, and is capable of driving up to 136 km/h (85 mph) on electric power alone. The combustion engine takes over for higher-demand operation and charges the battery, while electric power is used for vehicle launch and lower speeds. Fusion Hybrid will come to Europe as the Mondeo Hybrid and is targeted to reach fuel economy below 4.5 l/100 km and CO2emissions below 99 g/km.

The Ford Focus Electric and C-MAX Energi plug-in hybrid vehicles are already integrated into the transport infrastructure of Cologne, Germany, supporting the €13.2 million “colognE-mobil” research project, which could provide a template for the potential roll-out of electric vehicle infrastructures in further cities across Germany.

A Ford -sponsored poll shows most Europeans are concerned about the environment and believe the biggest problem facing the world today is climate change. However, the survey of 6,000 people across Europe also found many people are unsure of how to lead a greener lifestyle, that most are committed to car ownership, and that the overwhelming majority see electrified vehicles as better for the environment.

Ford commissioned the poll conducted by “The Futures Company,” a leading consultancy, to better understand public opinion and attitudes on a range of mobility issues and found:

* 72 per cent believe electrified vehicles are better for the environment

Ford first produced an electrified vehicle exactly 100 years ago when the company built a non-production electrified version of the Ford Model T. The joint project between Ford Motor Company founder Henry Ford and inventor Thomas Edison to create a “cheap and practicable… electric automobile” was hampered by the limited battery technology of the time.

“Ford has a proud heritage of making innovative technology available to as many people as possible and will provide one of the industry’s most comprehensive ranges of sub-100g/km CO2 cars with the variety and flexibility to suit the needs of all our European customers,” said Samardzich.