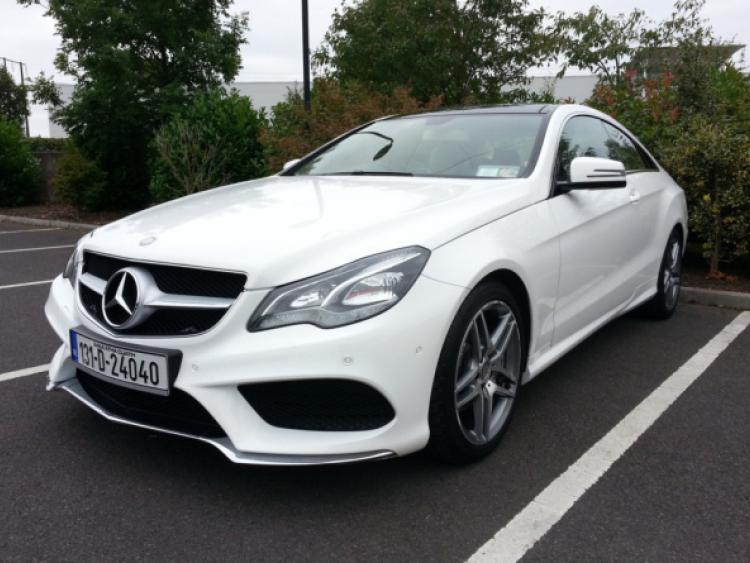 Mercedes-Benz have been doing a lot of work recently and most of that work has been on new models.

Mercedes-Benz have been doing a lot of work recently and most of that work has been on new models.

They are flying out of the factory and hitting the showrooms.

The E - Class Coupe is one of them, it’s one of the few real coupes on the market, I mean it only has two doors and a sweeping roof.

While there’s a very modern exterior and in white, like my test car, it’s simply gorgeous.

The interior feels very much Mercedes-Benz, none of the controls are where they are in any other car.

For instance, the automatic gearbox is on the steering column and the handbrake is a pedal where the clutch should be.

Once you get used to it you won’t mind and that’s the key, Mercedes want you to only drive their brand and that means when you get into any other brand you’ll find it confusing and that will drive you back to Mercedes begging for the indicators to be on the same stalk as the wipers.

On the road the coupe is smooth like butter, it’s quiet at speed and with the cruise control on I bet you’ll feel relaxed and enjoy the miles it’ll eat up.

Speaking of which, the 2143cc engine puts out 170hp which doesn’t feel enough for a car that looks as good as this.

The up side is that it’s very economical particularly on the motorway where it just ticks over.

In traffic the engine shuts down when you are stopped thus saving fuel and in fairness to Mercedes the shut down or start up causes little or no vibration in the cabin which is unusual for modern cars because some of the start/stop systems would shake your teeth loose when they start up.

The E Class coupe is a brilliant car that looks fantastic and so long as you aren’t racing the 170hp diesel unit will do the daily runs with ease.

There’s a massive boot and good room in the cabin. If you go with the cream interior you’ll be very happy looking at the inside for years, unless you have kids then perhaps get something a little darker.

It might use a tank of fuel in ten minutes but what a fantastic 10 minutes it would be; but then, if you have to ask how much then you probably can’t afford it just like the rest of us.

*** The The E initially stood for Einspritzmotor (German for fuel injection engine); a new feature in volume production vehicles at the time that the E-Class first appeared, with the E as a suffix to the engine nomenclature in the 1950s. It was not until the launch of the facelifted W124 that the E was used as a prefix and the model referred to officially as the E-Class (or E-Klasse). At this time all Mercedes cars used fuel injection and the company felt it was not necessary to add this as a distinguishing feature. Due to the E-Class’s size and durability, the cars also frequently serve as taxis in European countries. Older models like the W123 and W124 are used in Malaysia as inter-state taxis, and the W211 is used in Singapore as a taxi.